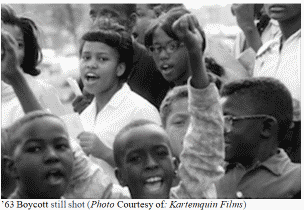 Los Angeles, CA (The Hollywood Times) 1/18/19–“Even as a young person, I could see a difference in the quality of the environment and the resources. The schools in the predominantly white areas of the city had more and they had better.” Jill Willis, an elementary student in 1963.

Director Gordon Quinn presents ’63 Boycott, a documentary short that revisits October 22, 1963, when 250,000 students boycotted the Chicago Public Schools to protest racial segregation. The short film exposes the viewer to the unnecessary trials and tribulations caused by racism for those living in the northern part of the country seeking a better education.

’63 Boycott opens with scenes of protesters past and present standing against unfair practices of the Chicago school system against students of color. It shines the light on the struggle and fight of black parents, students and those against segregation in Chicago during the sixties to receive a quality education. Not much has changed over the past fifty years as the unacceptable public school conditions of the sixties are mirrored in the lives of Chicago’s Black and Latino youth of today.

Quinn used footage he shot with a 16mm camera of protesters marching against the treatment of black students in Chicago’s public school system in 1963 and fused it with reflections of participants and organizers to showcase one of the largest northern civil rights demonstrations. The blending of the two time periods is well done and creates a very cohesive and insightful documentary.

One individual personally touched by the stench of racial segregation is Sandra Murray. She shares her memory of the crushing blow she received from someone who was in a position to lead and help her onto a path to fulfill her academic dreams but took the opportunity to dash them.

“At that point, colored kids went to Sexton and the white kids went to Ogden. My mother got me into Ogden where there were two black students. Entering high school, I wanted to be a Research Scientist.

“I ended up in vocational school and I was going to be a secretary. And this was crushing.”

The film further reveals Civil rights organizations calling for then Superintendent of schools, Benjamin Willis’ resignation. It was felt that ”Willis Wagons,’’ trailers placed on playgrounds and parking lots to combat overcrowded black schools, were there to keep “colored” students from enrolling in white schools. The Board of Education refused to accept Willis’ resignation, which inspired the boycott. It was an all city boycott.

“There were people who would say, if we integrate the schools, then the whites would flee the city. Benjamin Willis was brought here purposefully by the late Richard J. Daley to keep the schools segregated.”  Timuel D. Black, Negro American Labor Council.

“I’m very happy to be working with PBS again. I believe it’s essential that a film about the struggle for equality and equity in education be accessible to all,” said Quinn.

‘63 Boycott is an informative, impactful and memorable piece of work that is one of 10 short documentaries nominated for Best Documentary Short at the 2019 Academy Awards.

A key point in the film for me was Sandra Murray who shared her experience as a young black girl in the public school system during the 1960s. Her guidance counselor attempted to dash her hopes of becoming a Research Scientist. The protest marked a turning point for Murray because she persevered and became a Research Scientist.

Murray says, “Forget some instructor who said I was colored and a girl. I was going to be a Research Scientist.”

To me, this is the point of the film. When we move and stand up to make wrongs right, lives can be changed for the better.

’63 Boycott is a well-paced short 30+ minute film that will enlighten you to an important part of American history and touch you for a lifetime.

Freedom Day October 22, 1963, 250,000 students stayed away from schools with the permission of their parents to protest segregation in the public school system. Total financial loss to Chicago schools, $470,000.