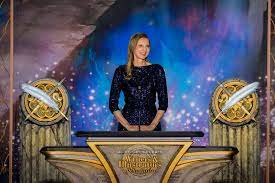 THE 38th ANNUAL L. RON HUBBARD ACHIEVEMENT AWARDS GALA
CELEBRATING THE WINNERS OF THE
WRITERS AND ILLUSTRATORS OF THE FUTURE
SCIENCE FICTION AND FANTASY CONTESTS

Hollywood, CA (March 30, 2022) – Author Services, Inc. and Galaxy Press will present The 38th Annual L. Ron Hubbard Achievement Awards Gala celebrating the winners of the Writers and Illustrators Contests, honoring 13 writers and 12 illustrators from around the world for their excellence in the genres of Science Fiction and Fantasy.  Who will win?
https://youtu.be/SNN9sOW62w0

The Black Tie Invitation Only Event, with celebrities in attendance and renowned Science Fiction and Fantasy Award Presenters, will be held on Friday, April 8, 2022 at the Taglyan Complex, 1201 Vine Street (at Lexington Avenue, the entrance for Valet Parking), Hollywood, CA  90038.

Red Carpet Arrivals begin at 3:30 p.m.  Emceed by Gunhild Jacobs, Executive Director of Author Services, Inc., the event will be catered by Divine Catering.  The Awards Banquet will start at 5:00 p.m.  Members of the General Public can watch the Awards Show streaming live from 7:00 – 9:30 p.m. PDT at http://www.writersofthefuture.com A Book Signing and Reception will follow the Awards Show in the lobby of the Taglyan Complex from 9:30 – 10:30 p.m. PDT.

Joni Labaqui, Director of the Contests for Author Services, Inc. said, “This year the theme for our awards show represents a dichotomy of pre-historical and futuristic worlds merged by magic.  It is a fusion of pre-historic mammoth with an alien robot. The cover artwork for Volume 38, ‘The Mammoth Leaders,’ was created by Illustrators of the Future Contest Judge, Bob Eggleton, dedicated to our late Book Editor and Writers of the Future Contest Judge, David Farland, who wrote the story, ‘A Word of Power,’ inspired by the cover design.  On the evening of April 8, 2022 we will present awards to 25 Science Fiction and Fantasy Writers and Illustrators of the Future that have been chosen as winners of the 2022 contests adjudicated by world renowned Science Fiction and Fantasy Writer and Illustrator Judges.  At the same time, we will honor seven additional 2020 and 2021 contest winners who were unable to attend the Gala last year, due to the pandemic.”

John Goodwin, President of Galaxy Press, said, “One Grand Prize Writer Winner and One Grand Prize Illustrator Winner will be selected for Volume 38 published in 2022.  The Grand Prize winners will be selected from a field of collectively 12 Quarterly Writer Winners and 12 Quarterly Illustrator Winners.  In addition, we will honor one Finalist Writer.  Our contests promote the arts welcoming diversity, ethnicity, creativity and equality, with no age limits.  The Awards Show and Banquet will be held in the Taglyan Complex’s Grand Ballroom, and will be followed by a book signing and reception.”

Goodwin continued, “Our show will open with a performance by accomplished singer and songwriter, Jesse L. Stevenson, who will perform the song, “Men of Reason,” with music written by Golden Era Musicians and lyrics written by the late
L. Ron Hubbard, followed by an In Memoriam Tribute to David Farland, a beloved longtime Writer Contest Judge and Book Editor who passed away suddenly this year.  Then we will hear a message from the late Frank Frazetta, a legendary Fantasy Artist.  Our Keynote Speaker will be John F. “J.T.” Thompson, recently retired U.S. Air Force Lieutenant General and former Commander of the U.S. Space Force’s Space and Missile Systems Center.”

Gunhild Jacobs, Executive Director for Author Services, Inc. will Emcee the event, and Joni Labaqui will present The Golden Pen Award and a $5,000 Grand Prize Check to the winner of the of the Writers of the Future Contest for 2022, and The Golden Brush Award and another $5,000 Grand Prize Check will be presented to the winner of the Illustrators Contest for 2022.  John Goodwin will unveil “L. Ron Hubbard Presents Writers of the Future Volume 38,” painted by internationally renowned artist, Bob Eggleton.

This year’s live awards show will be simultaneously broadcast to a worldwide audience via the Internet streaming live from 7:00 – 9:30 p.m. PDT www.writersofthefuture.com  The airing time of the broadcast will vary depending on the time zone viewers are residing in.  Directly following the awards show the winning authors and illustrators will sign books at a reception to be held in the well-appointed lobby of the Taglyan Complex.  This year’s contest winners will also have the opportunity to attend workshops held here in Los Angeles one week prior to the awards show to network with the renowned writer and illustrator judges of this year’s competitions to gain valuable feedback to help them advance their careers in their chosen fields of interest.

The 12 Writer 2022 Winners of the Writer’s Contest and One Finalist include:

The 12 Illustrator 2022 Winners of the Illustrator’s Contest include:

Additional 2021 and 2020 Writers and Illustrators who will be Honored include:

About The Keynote Speaker:
John F. “J.T.” Thompson, recently retired U.S. Air Force Lieutenant General and former Commander of the U.S. Space Force’s Space and Missile Systems Center, where he was responsible for approximately 6,000 employees nationwide and an annual budget of $9 billion.

Thompson said, “Science Fiction writers and illustrators of the future are really writers and illustrators of the past and present, who see into the future and want to expose the rest of us to it.  They’ve put the hard work, day in and day out, over and over, honing their skills and perfecting their artworks.  Through this forum, they’re taking the critical – and bold – step of putting it out there for the world to review and judge, exposing their personal art to criticism or praise – perhaps a bit of both – and making us the better for it.  What an incredible group of intrepid artists.”

Thompson entered the Air Force in 1984 as a graduate of the U.S. Air Force Academy in Colorado Springs, CO, and retired, after 36 years of active service, in August 2021.  During his career, he served in a variety of scientific, acquisition, and logistics-oriented capacities, including staff assignments at Air Force Systems Command, Air Force Material Command, and in the office of the Assistant Secretary of the Air Force Acquisition.

About The Contests:
Following the 1982 release of his internationally acclaimed bestselling Science Fiction novel, “Battlefield Earth,” written in celebration of 50 years as a professional writer, L. Ron Hubbard created the Writers of the Future Contest (www.writersofthefuture.com) in 1983 to provide a means for aspiring writers of speculative fiction to get that much-needed break.  Due to the success of the Writing Contest, the companion Illustrators of the Future Contest was created in 1988.

The annual Contests draw entrants from around the globe and are free to enter.  Winners retain full rights to their work and each are given cash awards.  Grand Prize Winners receive an additional $5,000. The Contest flies out all winners to Los Angeles for an expense-paid, weeklong workshop given by Contest judges and culminates in a Black Tie Gala Awards event.

In the 38 years of the Writers of the Future Contest, there have been 452 winners and 83 published finalists.  The past winners of the Writing Contest have published 1,800 novels and nearly 6,200 short stories.  They have produced 33 New York Times bestsellers and their works have sold over 60 million copies.

In the 33 years of the Illustrators of the Future Contest, there have been 382 winners.  The past winners of the Illustrating Contest have produced over 6,000 illustrations, 360 comic books, graced 624 books and albums with their art and visually contributed to 68 television shows and 40 major movies.

The Writers of the Future Award is the genre’s most prestigious award of its kind and has now become the largest, most successful and demonstrably most influential vehicle for budding creative talent in the world of speculative fiction.  Since its inception, the Writers and Illustrators of the Future contests have produced 38 anthology volumes (with this event) and awarded upwards of $1 million in cash prizes and royalties.  For more information please visit www.writersofthefuture.com and www.galaxypress.com

WHO & WHAT:
The 38th Annual L. Ron Hubbard Gala Achievement Awards celebrating the winners of the Writers and Illustrators Contests, honoring 13 writers and 12 illustrators from around the world for their excellence in the genres of Science Fiction and Fantasy.  In addition seven Writer and Illustrator winners from 2021 and 2020 will be honored, as they weren’t able to attend last year’s award ceremony, due to the pandemic.

WHERE, WHEN & HOW:
Friday, April 8, 2022.  This Black event, with celebrity award presenters, is By Invitation Only, and will be held at the Taglyan Complex, 1201 Vine Street (at Lexington Avenue), Hollywood, CA  90038.  The motif for this year’s two-and-half hour awards show represents a dichotomy of pre-historical and futuristic worlds merged by magic.  It is a fusion of pre-historic mammoth with an alien robot.