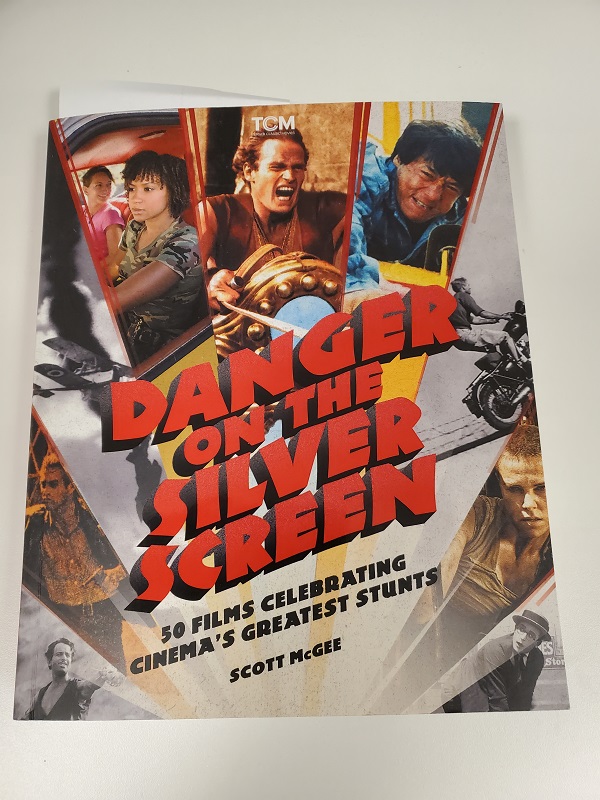 Just Released from the TCM Library

DANGER ON THE SILVER SCREEN presents a heart-racing study into the evolution of an often-overlooked element of film—stunt work—and a glimpse at the people behind the action who continue to leave movie audiences so awestruck.

The 50 foundational films profiled in this unique guide capture the exhilaration of a car chase, the comedy of a well-timed prat fall, or the adrenaline rush from a fight scene, complete with reviews, behind-the-scenes stories, in-depth interviews with stunt players, and hundreds of photographs.

“It is truly a great book to add to your collection.  So much wonderful information about the stunts that brought us all enjoyment and really never knew about those stunts.  Any movie buff would love to have a copy of this book, so don’t forget to get a copy for the classic movie buff in your life.” Judy Shields, The Hollywood Times

The Hollywood Times had a conversation with author Scott McGee about his new book Danger on the Silver Screen. Enjoy

During our conversation, Scott said he would appreciate it if our listeners/ readers would consider purchasing his book from Larry Edmunds bookshop in Hollywood.  Just click here to visit his store online and maybe even drop by to check out the store, which is really cool and get yourself that copy of Scott McGee’s new book.

From Buster Keaton’s “house gag” and the heart-stopping car chases in Ronin, to the comedic stunts of The Blues Brothers and the meticulously planned fight choreography of John Wick, movie lovers and stunt-aficionados will enjoy the action-packed journey through the history of cinema stunt work offered in DANGER ON THE SILVER SCREEN.

Buckle in and join TCM on a action-packed journey through the history of cinema stunt work in Danger on the Silver Screen. This action-packed guide profiles 50 foundational films with insightful commentary on the history, importance, and evolution of an often overlooked element of film: stunt work. With insightful commentary and additional recommendations to expand your repertoire based on your favorites, Danger on the Silver Screen is a one-of-a-kind guide, perfect for film lovers to learn more about or just brush up on their knowledge of stunt work and includes films such as Ben-Hur (1925 & 1959), The Great K&A Train Robbery (1926), Steamboat Bill Jr. (1928), The Thing from Another World (1951), Bullitt (1968), Live and Let Die (1973), The Blues Brothers (1980), Romancing the Stone (1984), The Matrix (1999), The Bourne Supremacy (2004), John Wick (2014), Mission: Impossible—Rogue Nation (2015), Atomic Blonde (2017), and many more.

Scott McGee is the senior director of Original Productions at Turner Classic Movies. He is also a programmer for TCM’s annual TCM Classic Film Festival, the lead programmer for the TCM Classic Cruise, and has been a presenter at many of TCM’s past events and other industry conventions.

Turner Classic Movies (TCM) is a two-time Peabody Award-winning network that presents classic films, uncut and commercial-free, from the largest film libraries in the world highlighting “where then meets now.” TCM features the insights from Primetime host Ben Mankiewicz along with hosts Alicia Malone, Dave Karger, Jacqueline Stewart and Eddie Muller, plus interviews with a wide range of special guests and serves as the ultimate movie lover destination. With more than two decades as a leading authority in classic film, TCM offers critically acclaimed series like The Essentials, along with annual programming events like 31 Days of Oscar® and Summer Under the Stars. TCM also directly connects with movie fans through popular events such as the annual TCM Classic Film Festival in Hollywood, the TCM Big Screen Classics screening series, and the TCM Classic Cruise. In addition, TCM produces the wildly successful podcast “The Plot Thickens,” which has had more than 5 million downloads to date. TCM hosts a wealth of material online at tcm.com and through the Watch TCM mobile app. Fans can also enjoy a classic movie experience on the Classics Curated by TCM hub on HBO Max.