By Valerie Milano
Los Angeles, CA (The Hollywood Times) 2/22/21 – It’s been 30 years since Tim Allen’s successful eight-year run with his family-oriented sitcom, Home Improvement, where he brought his stand-up comedy skills to the role of Tim “The Toolman” Taylor, an expert authority on residential enhancement and host of Tool Time, a show-within-a-show, along with his assistant played by Richard Karn and their alluringly busty and zany tool girl, portrayed by Pamela Anderson. But Allen’s character was all thumbs at home when it came to typical repairs, serving to frustrate his wife (Patricia Richardson) while dealing with the ins and outs of parenting three mischievous sons.

Well, it’s time to put those tool belts back on and power-up the work machines with The History Channel’s new 10-episode program, Assembly Required, airing Tuesday, February 23 at 10/9c—a reality competition series reuniting Allen and Karn, this time as co-hosts (joined by YouTuber and do-it-yourself specialist April Wilkerson). No doubt this chucklesome duo will bring the hilarious barbs and banter that kept Home Improvement viewers coming back for more year after year. But for the three contestants, referred to as Makers on the new show, there’s no funny business going on—there’s money at stake and it’s not Monopoly money.

In a preview of the show, Tim Allen, with Richard Karn by his side, wasted no time in giving his co-host a jab: “I’m back in the shop! We still got it! At least I do.” Then came Karn’s subtle but taunting come-back: “You got something.” Let’s hope Wilkerson can keep these two boys in line as she fulfills her role as the series’ resident expert while the show “spotlights the best and the brightest Makers from across the country.”

There are two rounds of challenges: Make-Or-Break and Run-With-It. In Make-Or-Break, the three Makers are given 90 minutes to build a creation determined by Allen and Karn, but there’s a catch: the contestants can only use items from mystery crates—one presented to each of the three while working in their own workshops and using their own equipment. When time’s up, they have to test out their constructions virtually from their workshops for Allen and Karn to judge. One contestant will be eliminated while the others go on to Round Two.

In the second challenge, Run-With-It, the two remaining contestants will have five days to build another creation, specifically one that has never been constructed before, again from items in mystery crates. But unbeknownst to the two Makers, April Wilkerson has her own secret challenge—she has broken one of the parts in each of the mystery crates that will require repair. The purpose of Wilkerson’s tampering is to see if the two remaining contestants are as capable of fixing as they are at building. As in the first round, Allen and Karn will be throwing in their two cents and Wilkerson offering advice. 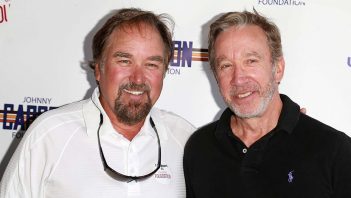 Allen states, “We’re very similar to the characters we played in Tool Time. In fact, the new program will be a real-time reality takeoff of it.” Karn spoke about the challenges faced in doing Assembly Required virtually due to COVID-19, “Sometimes we had to wait a while to make sure that the Wi-Fi and cameras and everything were feeding us back all the information…when we actually saw the builds in person, we’d see the big little things that we didn’t realize.” Executive Producer, Brent Montgomery, assured, “The History Channel does a high-quality production while trying to make it as least-COVID-looking as possible.” Talking about the viewership, Wilkerson expressed, “I think at the root of our DNA, we all want to build and create.” Allen agreed, “It’s in our DNA somewhere. Whatever we screw up we can fix it.” 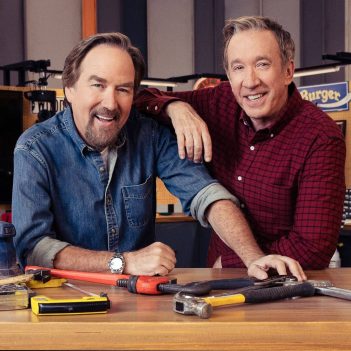 Unlike Round One where the builds were judged remotely from the contestants’ workshops, at the end of Round Two the Makers’ finished items are delivered to Allen’s workshop to be tested by the two hosts and judged on three principal elements: quality, design, and functionality. The champion wins $5,000 in prize money. Over the course of the 10 episodes, plan on seeing some mind-bending creations out of common household items, including a water fountain; a combination ice melter and leaf blower; a BBQ bicycle; and a do-it-yourself jacuzzi. In each episode, Allen and Karn will be discussing the unique history of the materials used in household appliances and their inventors. Tune in this Tuesday to be your own armchair judge, and perhaps you too will be inspired to break out the tools to create your own builds that may surprise you.