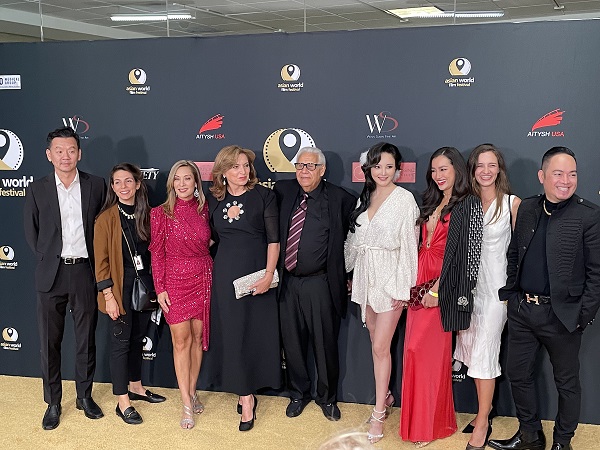 Beverly Hills, California (The Hollywood Times) 11/02/2021 Monday November 1, 2021, was the Opening Night of the 7th Asian World Film Festival at the Landmark Theatres in West Los Angeles. This film festival had its struggles being put together with the on-going impact of the COVID pandemic.

This year, AWFF (founded by Kyrgyz public figure Sadyk Sher-Niyaz) is showcasing films to members of the Motion Picture Academy, the Hollywood Foreign Press Assn. and all the guilds during a critical phase of the awards season leading up to the Golden Globes and the Oscars. Festivities began this evening with a screening of Oscar-winning director Chloé Zhao’s Eternals at 7:30 pm on November 1 and will conclude with South Korea’s Oscar-submitted film Escape from Mogadishu on November 11. Prior to that screening was a Red Carpet event that began at 5:15 PM for the press with a number of the filmmakers and actors present, as well as Asian-American celebrities from the Hollywood area. For information on the individual films as well as tickets, go to: https://asianworldfilmfest.org/2021-festival-line-up.

The Asian World Film Festival is presently organized by Award-winning Film Director & Producer Georges Chamchoum, who heads up the festival and has been “flabbergasted” when thinking of Asia’s disappointingly low Oscar representation, especially given all the masterpieces that have come from the region. Two years after South Korea’s Parasite won best picture, Chamchoum believes events such as the Asian World Film of which he serves as executive and program director, are essential to raising those statistics moving forward. Thanks to its mission to strengthen ties between the Asian and Hollywood film industries, Chamchoun says, “We are part of the puzzle that puts Asian-American art in the spotlight.”

Chloe Zhao, the director Eternals, will be honored at the festival with a Snow Leopard Trophy for cinematic achievement. The Suicide Squad actor Mayling Ng will receive a rising star trophy and France Nuyen’s lifetime work will also be recognized.

Celebratory events honoring Vietnamese, Korean and African entertainment are on the agenda as well. Awards will be presented by Cambodian Princess Norodom Arunrasmy, Ryoo Seung-wan, Nancy Kwan and Shannon Lee.

When asked about the inclusion of a Marvel action film in the Asian World Film Festival, Georges Chamchoum noted that it stars a diverse cast including Gemma Chan and Kumail Nanjiani, as well as a major director Chloe Zhao, born in China and raised in the USA and Britain. Chamchoum adds that it took three months alone to snag Eternals and he’s “extremely lucky that one person at Disney was as passionate as I was for some crazy reason” to help the festival secure it. For me, the most important thing is I want a movie that the audience enjoys, that the audience knows they aren’t in Hollywood, and that the audience knows that Asian Americans are capable.”

The newly designed Snow Leopard trophies were created by Vietnamese-American artist and master sculptor Sir Daniel Winn, and will be presented for best film, best actor and best actress, along with special jury, audience and distinction awards. Sir Daniel Winn is a Vietnamese-born artist, gallery owner, and philanthropist, who has been especially generous in his support of the Asian World Film Festival. For this year’s film festival, Winn has graced the reception area and salon with many of his sculptures and paintings which would ordinarily be on display at the Winn Slavin Gallery in Beverly Hills.

This year’s Asian World Film Festival includes 7 or 8 films which are Oscar submissions for Best International Feature Film. The Centerpiece film is a documentary film Qazaq History of the Golden Man, a film from Kazakhstan directed by Igor Lopatonok about Nursultan Nazarbayev, the leader of Kazakhstan for 30 years who forged the modern-day nation-state after the collapse of the Soviet Union. The film’s executive producer is Oliver Stone, who knows him and interviews him extensively in the film. I understand that Qazaq is Kazakhstan’s Oscar submission for 2022.

Of the Oscar submissions in the film festival lineup, one of the most anticipated is Shambala, a film from Kyrgyzstan directed by Artykpai Suyundukov and based on a famous novella The White Ship, by Kyrgyz writer Chingiz Aitmatov. Shambala tells the story of a lonely, impressionable, seven-year-old boy who lives in a protected forest, high in the mountains, with his grandfather, step-grandmother, auntie, and uncle. He spends his time exploring and listening to legends from his grandfather, in particular tales about the sacred Mother Deer. The world of myths and folklore eventually conflicts with the harsh reality of the world of adults, who are faced with their own personal problems and dilemmas.

Some other Oscar submissions are: Should the Wind Drop, a film from Armenia directed by Nora Marorosyan and starring French actor Grégorie Colin as an international auditor charged with appraising if Stepanakert Airport in the small, breakaway Republic of Artsakh in Nagorno-Karabakh region before the recent war broke out between Armenia and Azerbaijan. Brighton 4th is a feature film from the Republic of Georgia directed by Levan Koguashvili, about a former wrestling champion who goes to visit his son Soso living in Brooklyn. From Palestine comes Al Garif (The Stranger), the Palestinian Oscar submission directed by Ameer Fakher Eldin. In a small village in the occupied Golan Heights, the life of a desperate unlicensed doctor, who is going through an existential crisis, takes another unlucky turn when he encounters a man wounded in the war in Syria.

The Indian film Peebles, directed by P.S. Vinothraj, is a drama in Tamil about a young boy who follows his violent and alcoholic father on a quest to find his mother, who has run away from his abuse. This is India’s Oscar submission for the Best International Film Award in 2022. From Indonesia comes Yuni, a dramatic narrative film directed by Kamila Andini, about a bright Indonesian female student determined to pursue her education and resist getting married, despite the expectations of her community. This Is Indonesia’s Oscar submission. Escape from Mogadishu is South Korea’s Oscar submission. Directed by Ryoo Seung-Wan, it re-constructs the true story of how rival North and South Korean diplomats were trapped in Mogadishu as the Somalia Civil War raged.