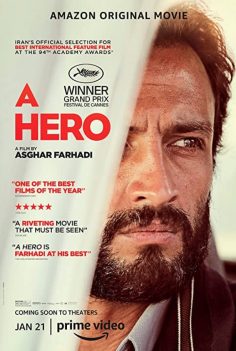 Los Angeles, CA (The Hollywood Times) 12/16/21 – In the evening of Tuesday December 14, there was a screening of A Hero (Iran, 2021), the latest film by Oscar-winning director Ashgar Farhadi at the Los Feliz Theatre in Los Angeles. A Hero received the Grand Priz at the Cannes Film Festival early this year and this L.A. premiere was sponsored by the American Cinematheque, with Ashgar Farhadi present for an insightful Q&A afterwards. This film is about truth-telling, honor and the price of freedom. Asghar Farhadi’s film slyly reveals itself to be more than a political parable about the cascading injustices of the debtor’s prison. Perhaps owing to his work in theater, writer-director Asghar Farhadi seems able to find drama in the most surprising places. After his Spanish-set Everybody Knows with stars Penelope Cruz and Javier Bardem and a string of short movies, he makes a welcome return to his native Iran with A Hero (Ghahreman), a very fine film about honesty, honor and the price of freedom. The film which is Iran’s submission for Oscar consideration will be in theaters on January 21 and available for streaming on Amazon Prime.

The Iranian-French co-production is a small film in format, pointing it to art house fans who can pick over the director’s typical themes amid subtle symbolism and refined technical work, Prisons are one of the key locations in contemporary Iranian cinema, both as overcrowded places of punishment and, naturally, of metaphoric confinement within a tough society. In A Hero, the prison is an open-door cage well-serviced by buses, where the working-class hero pops in and out, as his fortunes ebb and flow. It is through this door that the unemployed Rahim (Amir Jadidi) chooses his own fate. A far cry from the director’s middle-class drama A Separation, the first Iranian film to win the Academy Award for best foreign language film, A Hero returns Farhadi to the basics of national storytelling in an increasingly complex tale of half-truths and lies that eat away at all those who traffic in them, which is to say, everybody.

The setting is Shiraz and the first scene, in which we meet the honest but naïve protagonist, takes place on a sheer cliff face containing the royal tombs of Persepolis, where the kings of the Achaemenid Empire are at rest. Rahim, who has just been released from prison on a two-day leave, climbs up an excruciatingly high scaffolding strung with ropes; it seems in every way a place of death. In this symbolic landscape, he meets his friendly brother-in-law (Alireza Jahandideh) and together they discuss ways for him to repay the old debt that sent him to jail three years ago.

His creditor is another brother-in-law, Bahram (Mohsen Tanabandeh), a shopkeeper who embodies malice and pettiness. He has it in for young Rahim, who was formerly married to his sister, and does everything in his power to destroy his reputation and keep him in prison. On Rahim’s side is his own sister, his son and the new love in his life, Farkhondeh (played as a strong modern woman by Sahar Goldust), whom he hopes to marry as soon as he can pay off his debt and get back to work.

Farhadi’s screenplay thrusts the viewer into the middle of a murky story about a lost handbag. A woman waits to board a bus with a handbag containing 17 gold coins; but before reaching the next stop, she realizes the bag is gone. What we see is Farkhondeh light-heartedly giving the gold coins to Rahim. Together they try to sell them to a dealer, but the price is too low. It will not be enough to pay even half of the 150,000 tomans he owes Bahram for a business that went bust. With all doors closed to him and his conscience pricking, Rahim advertises for the owner of the bag and returns it to a poor woman who weeps with joy to get it back.

Of course, Farhadi’s intent would seem to be to take apart the very notion of a hero. The film opens with Rahim meeting his sister’s husband, Hossein (Alireza Jahandideh), at the tomb of Xerxes I, a beloved king of ancient Persia, where the man is a builder on a maintenance project. That heroes’ images need to be maintained by teams constitutes one of the film’s fundamental observations, with its later emphasis on the way news reports and social media seize on small distortions of Rahim’s story that begin to accumulate. And Rahim’s ascent and descent of the scaffolding abutting the tomb is one of the few almost purely symbolic moments in A Hero, predicting his later rise and fall as a social media darling

The question of heroism, though, is superseded by questions of truth and its social value writ large. As Rahim tries to escape the encirclement of his doubters, spurred forward by Bahram, he begins adopting the storytelling strategies of the prison-charity complex for whom he’s become a golden child, in a bid to attain his freedom and redeem his and Farkhondeh’s future. Which lies are justified, what motivations compel them, and how far they should be carried through are the ethical concerns that Farhadi illustrates with a precise building up of tension.

In the second act of the film, word of his good deed gets around and the image-conscious prison authorities send over a TV crew to interview him. Jadidi is at his best showing Rahim’s naïve pleasure in being singled out as a hero, after a lifetime of being treated like a worm. Best of all, he becomes a hero in the eyes of his son, a serious boy with a speech disorder who seems old beyond his years. But the publication of Rahim’s story in the newspaper and its airing on regional TV also excites jealousy, in no one more than the dark-hearted Bahram, who doubles down on being obnoxious and unfair and refuses to renegotiate Rahim’s debt.

Interestingly for an Iranian film, the power of social media plays a huge role in the hero’s unraveling, and several plot points turn on whether or not certain facts will be posted and made public. Perhaps the film’s most moving scene shows a prison warden feeding lines of not-completely-true testimony to Rahim’s little boy, who bravely struggles to get through a few sentences being recorded on camera to improve his father’s image.

It’s the alternating of sympathies that results from almost imperceptible shifts in Farhadi’s emphasis in a given scene – like one in which Rahim encounters Bahram by happenstance at an outdoor market – that lends the film its emotional and ethical ballast. In such moments, A Hero reveals that it’s more than a political parable about the cascading injustices of the debtor’s prison. It’s also a demonstrative examination of the way our raising of heroes onto social media pedestals diminishes the messy, sometimes impenetrable truth of human lives. As Farhadi pointed out at the Q&A after the screening, being a “hero” is a media blip that is impossible to maintain in real life.