Los Angeles, CA (The Hollywood Times) 10/13/21 – Yesterday I was able to see Ascension (USA, 2021), a feature-length documentary by Chinese-American filmmaker Jessica Kingdon, about the pursuit of the “Chinese Dream” in contemporary China – a dream that priorities productivity and innovation above all. This impressive film has garnered a number of awards including Best Documentary at the 2021 Tribeca Film Festival. It is playing at several Laemmle Theatres in a qualifying run for the Oscars in 2022. In a departure from so many documentaries that take on more than they can chew, Ascension’s wanderings throughout China are purposeful and often mesmerizing. It’s a lot to ask a filmmaker to take a 97-minute snapshot of a country. Yet the result is a tight, impactful look of the ongoing changes as a culture becomes more consumer oriented and materialistic, as seen here. (Filmed in 2019, clearly before the pandemic, there are no face masks anywhere on screen.)

As engrossing as it’s alarming, the documentary flows with a stream of consciousness about the illusion of the “Chinese Dream.” Without blunt commentary other than the subtext Kingdon instills through the curation of the material, and some candid remarks of anonymous subjects, Ascension ruminates on many places of employment and career-advancement programs. Kingdon’s revelatory film is bookended by verses from a poem by her great grandfather Zheng Ze, written in 1912, the year a revolution ended imperial dynasties and transitioned the country into the Republic of China. At that moment of influx, he foresaw that voracious development, and the ascension into modernity and the chasing of grandeur, wouldn’t necessarily yield communal improvement.

Reaching the top is not always a positive step towards enlightenment if the motivation is a yearning for domination. The fixation with being number one at any cost is an evil that has long plagued the United States, thus it would be blatantly hypocritical to even suggest conditions in this country are significantly better. If we are lucky, pointing a mirror to China’s extreme undertakings might evince our own monstrous faults. Kingdon’s imagery meanwhile gives the impression of spontaneity but communicates loudly who the beneficiaries and the victims are of relentless industrial growth. 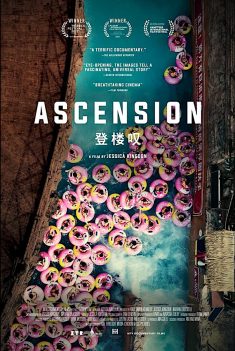 More than once a viewer might ask, how did director Jessica Kingdon gain access to all the corners she films. No one seems uninhibited or timid in front of her camera—in a bodyguard training school, the student slowest in the draw is punished by having to do push-ups, during which the instructor kicks him in the stomach. As the film traverses through 51 locations, it turns viewers into eavesdroppers. The film’s star is the editor (Kingdon). Each cut directs your attention here and there, and every sequence adds to the briskly paced mosaic. The arresting images—often wide shots of what first look like geometrical shapes—come first. They are supported by a subtle score by Dan Deacon, which varies from heavy use of strings to electronic music that calls to mind some of Giorgio Moroder’s best film work.

Near the final throes of Ascension, a young woman, presumably a social media influencer, poses for an impromptu photo session in the grounds of a luxurious hotel. Opulence surrounds her as far as the photographer’s lens can see. Suddenly, however, cinematographer Nathan Truesdall unveils a landscaper in close proximity working arduously under intense heat. The jarring contrast of the two realities contained within the same frame illustrates an abominable economic gap.

Slogans plastered across urban spaces in China’s cities preach hard work as a means to a greater quality of life, mantras not unfamiliar to those of us in the West. These generic platitudes place the burden of poverty and lack of opportunities on those most affected by them, and read as unimaginably facetious following the quite literal job market Kingdon opens with.

In a city center, recruiters call for prospective employees to enumerate the specifications of the open positions. The dismal perks, enticing in this context, include being able to do manual labor while sitting down or having a dorm located within walking distance to the factory. Companies seek working bees existing solely to increase productivity. In the opening montage of outdoor job recruiting fairs, employers hire right then and there. (Foxconn offers pay of $32 a day.) Via loudspeakers, a company admonishes potential applicants that neither tattoos nor hair coloring is allowed. The recruiters are nothing if honest. If hired, some job employees will be roomed four to a dorm room but no more than eight. (An air-conditioned factory acts as another incentive.) The honesty of the companies may come across as a bit brutal – one loudspeaker warns applicants they should be at least 18 years of age but no older than 38, not even by a day.

Following that are sequences of the hypnotic, repetitive motion of assembly lines at work, such as one knife after another getting imprinted with the company logo – while the worker splits her focus between handling the knives and watching a cop show on her smartphone. What makes the film fascinating is not knowing what the director will spotlight next. The camera ventures to all types of factories, from a poultry packing plant to at least one textile factory, the home of a line of “Keep America Great” items. In a segment that could be a short film all to itself, Kingdon ventures into a factory that methodically manufactures lifelike plastic female sex dolls, which includes discussions on the making of the genitalia and the formation of huge breasts. Curiously enough, the women who work there seem completely focused on the sex dolls they are painting. It’s a scene like something out of an R-rated Metropolis.

We visit classes for corporate receptionists where looks and style are everything. Although shocking to hear in such unfiltered fashion in a foreign country, the distance to how comparable personal is treated elsewhere surely isn’t much. Similarly, classes for women to learn office etiquette that, from our Western vantage point, appear outdated – even degrading – force us to grapple with how China’s cutting-edge technology and determined competitiveness coexist with its unique worldview.

In a class for middle-managers, the seminar participants are told: “You too can be a success, no matter how ordinary you are.” According to the teacher of a class on becoming an influencer, or “star boss,” the participants learn how to “monetize your personal brand.” It is all about getting rich. The people on camera repeatedly hint at how concerned Chinese corporations are with surpassing the United States. The myth of trickle-down economics to achieve a redistribution of wealth is also invoked. And in the digital age, physical goods are far from the most coveted acquisition, but the introduction of personal branding as a pathway to riches has entrapped many, with an “instructor” flat out noting knowledge has no value if it can’t be monetized.

In the wake of a new ultra-affluent class, businesses that cater to the elite proliferate with mandates that condone dehumanization in the name of advancement. Kingdon enters an academy that trains young men as loyal bodyguards to join security details for VIP clients, and a course that teaches service staff to act professionally even when their bosses humiliate or attack them.

Although shocking to hear in such unfiltered fashion in a foreign country, the distance to how comparable personal is treated elsewhere surely isn’t much. Similarly, classes for women to learn office etiquette that, from our Western vantage point, appear outdated – even degrading – force us to grapple with how China’s cutting-edge technology and determined competitiveness coexist with its unique worldview.

Any direct political commentary lightly flows throughout. Yet a scene of three butler trainees (in the upper-class British style) reflects, or perhaps rationalizes, a certain type of work ethic, as a woman expresses to her taciturn colleagues: “Foreign countries accuse China of denying human rights because they see China as a dictatorship. But there’s still so much economic inequality in our country, so the poor must first focus on survival. If you can’t survive, how can human rights exist?”

Author Jeff Lazarus and Hollywood Producer Suzanne DeLaurentiis to create the offbeat and edgy Comedy TV Series, “On All Fours”