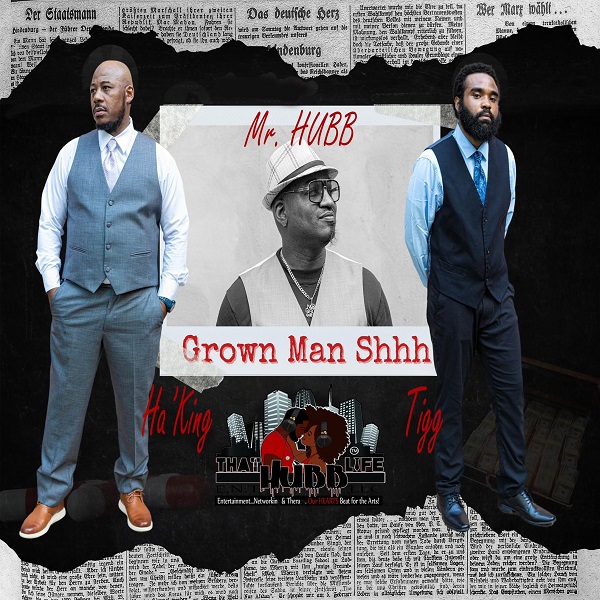 New York, NY – (October 14, 2022) – New Jersey based community leader, mental health advocate and artist Mr. HUBB aka Al-Tariq Best released his latest single “Grown Man Shh” featuring Ha’King and Tigg, following an exclusive premiere with Hip-HopVibe. This new single follows the success of his 2021 hit single and short film Live 4 Something that premiered with The Hype Magazine, as well as the recent announcement that one of Mr. HUBB’s upcoming singles will be featured on the soundtrack for Saban Films Die Like Lovers which we now know to be Bruce Willis’ final acting role. In addition, to his music career, Mr. HUBB is a well-known leader and mental health advocate in his community of Newark, NJ. Mr. HUBB is also the CEO and Founder of The HUBB Arts & Trauma Center, a facility that helps at risk youth deal with mental health issues and trauma they have faced using the arts therapy. Recently Mr. HUBB launched his latest venture ThatHubbLife ENT, a socially responsible Entertainment company where not only Mr. HUBB but other artists will be releasing their music in the future. Unlike many other entertainment companies or record labels ThatHubbLife ENT will not only help these artists release their music but will also work as a support system for them unlike many mainstream labels that tend to just focus on the immediate financial return of their artists. ThatHubbLife ENT is focused on the long-term mental health, safety and success of their artists. Mr. HUBB’s latest single “Grown Man Shh” featuring Ha’King and Tigg will be the latest release on ThatHubbLife ENT.

When asked about his latest single, Mr. HUBB said, “Grown Man Shhh’ is a song that depicts the courageous acts of vulnerability and accountability from men who admittedly made some bad decisions in their lives and happen to be blessed by God, as lyricists.  Men who have realized their responsibilities to their families, their communities and to their own individual and collective healing as men of color.  We have been harmed by all facets of trauma, yet we are pulling our pants up and standing up as grown men should! This song represents us making conscious decisions to do better and be better!”

Growing up in Newark, NJ, Mr. HUBB aka Al-Tariq led a far from semi-charmed life. The middle child of three sons in a single parent household, Al-Tariq witnessed his mother being abused under several domestic violence situations. He later endured his fair share of trauma, being physically and emotionally abused by other trusted so-called friends and relatives. “I didn’t understand my own trauma until recently,” he admits. “Now that I’m a grown man, I’m a Certified Victim Advocate, though it took a lot for me to recognize that I was also a victim at one point.” That realization led to self-awareness in understanding his own triggers, but also the reasons for some of the decisions that he made in his younger years. From the age of nine, Al-Tariq was making music and became the leader of a local Hip-Hop crew. “Music saved my life,” he explains. “I was smart and artistic, but I blended in with the dudes who were up to no good, because I found solace in them.” A life-altering event happened at the age 17, right before his first son was born, when he was pulled over by the police and dehumanized for driving while Black. “Something changed in me,” he said, “because right up the block there were drug dealers doing real damage, and I was being humiliated and my rights being violated.” Al-Tariq traded in his music career and pointed more towards social reform. He formed FP YouthOutCry Foundation, (Not-for-Profit 501c3) today legally doing business as The HUBB Arts & Trauma Center in Newark, NJ. H.U.B.B. stands for “Help Us Become Better.” While his 9000 square foot, Mayor-Appointed “Center of Hope” focuses on arts & trauma recovery, Al-Tariq, known now as Mr. HUBB to Newark and surrounding cities’ youth, utilizes the arts to save the lives of others the way music saved his. His latest venture ThatHUBBLife ENT, LLC is a socially responsible Entertainment, Networking and Therapeutic company that will introduce a roster of new talent, releasing their music, but also making sure that they’re prepared for the road ahead in an otherwise unforgiving music industry. Stay tuned to Mr. HUBB and ThatHUBBLife’s social media handles below for updates on future releases from Mr. HUBB as well as other artists signed to the label, concerts, and violence intervention tours.

About ThatHUBBLife ENT:
ThatHUBBLife ENT, LLC is a socially responsible Entertainment, Networking and Therapeutic company that will introduce a roster of new talent, releasing their music, but also making sure that they’re prepared for the road ahead in an otherwise unforgiving music industry. ThatHUBBLife ENT, LLC will include some of the tenets that Al-Tariq has applied to his previous missions, including intentional focuses on understanding the Entertainment business, the art of Networking and arts Therapy for self-empowerment. We plan to raise the bar with having artists reach their proverbial next level so, when they do release music, they can understand, replicate and teach the process to others and maintain sustainability.