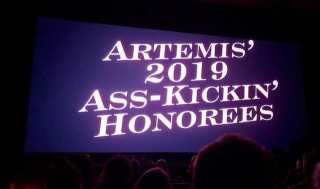 BEVERLY HILLS, CA (The Hollywood Times)  04/25/19 – The fifth edition of the Artemis Women In Action Film Festival (AWIAFF) kicked off their four-day celebration with an award gala at Ahrya Fine Arts Theater on April 25th. It is the 2nd year that the festival is presented by Paul Feig (The Heat, Spy, Ghostbusters). After a very long delay – the show didn’t begin until well after an hour of its slotted time – the women receiving awards and their stories made it well worth the wait.

Their mission is to both entertain and to influence the awareness of the dynamic and powerful roles women play in society and culture throughout the world. The trailer for the recipients was the best part of the show in terms of seeing what they actually do on the job – and they truly kick-ass. The festival’s panels, screenings and other special events will be held at Monica Film Center, 1332 2nd Street in Santa Monica from 10AM to 6PM April 27 – 28, 2019.

The lifetime achievement award went to stuntwoman trailblazer, Jeannie Epper (Wonderwoman, Hot Pursuit, Book of Eli) who received a lengthy standing ovation. Every stuntwoman who grabbed an Artemis Award thanked Jeannie for inspiring them as little girls to want to be Wonderwoman and some for her mentorship.

Many of the women double as actresses, stand-ins, stunt coordinators, choreographers, A.D.’s, directors and more as roles open wider for them. Melissa R. Stubbs (received the Stunt Action Icon Award) becoming the first women in her field to be invited to join The Academy of Motion Pictures Arts and Sciences – she’s also a member of the Director’s Guild of America working as 2nd Unit Director. 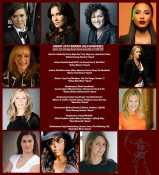 Every recipient spoke of community, the need for helping one another with some having more support than others – as is the case with Hollywood careers – across-the-board. Stunt women wear many hats and usually less clothes than their male counterparts. They can be pilots, racers, or just some crazy, real-life action heroes. Either way, a stunt performer brings a lot to whatever show or movie they are working on. Without them, movies and shows wouldn’t feel as real. No amount of digital special effects can even come close to replacing the work that stunt performers do.

Unfortunately, Hollywood isn’t the best at protecting their stunt performers. Stunt performers are frequently the most neglected on sets. They are expected to get the job done, no matter how difficult or dangerous a stunt might be. All too frequently, it’s like a death defying dare – which is why many producers and production companies have been sued over the years for misusing stunt performers and for deaths on the job. Many of the women spoke of injuries sustained and all were proud of their work stating how much they love what they do -the dangers, pitfalls and euphoria, aside.

It’s what makes this festival unique and important in the world of film festivals as women who have taken over what men used to do for them. Stuntwomen – like the Jeannie Eppers – have ripped open the doors and making way for generations to come.

The Artemis film festival line-up for Friday through Sunday films on can be found here: http://www.artemisfilmfestival.com/

ABOUT AWIAFF
The Artemis Women In Action Film Festival was founded by Melanie Wise and Zac Baldwin, two filmmakers with a long-time love of female-driven action films. Wise and Baldwin have produced shorts and features, focusing on female action projects. They saw that the genre was loved by audiences around the world, despite the fact that studios for many years claimed female action films were box office poison. In 2014, the idea of Artemis was born with the intent to create a space where these types of films could play for audiences with an unsatisfied hunger of female-driven action films. And for the Fifth Edition, Artemis is proud to include female-powered music.