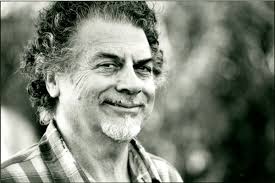 According to his bio, he was the only child of Latin American caricaturist/muralist Matias Santoyo and opera singer Armanda Chirot. As Santoyo learned to paint, he apprenticed with Los-Angeles-based artist and designer Murray Large as well as  the Russian master, Samuel Markitante.

Attending Chouinard Art Institute, Santoyo’s early work was influenced by many of the old masters such as Renoir, Picasso and Van Gogh.  In the 60’s and 70’s, Santoyo’s unique style started to emerge. David Santoyo states, “His figurative and abstract work from this period had the influence of the history before him but was crisp with new thought and expression. The signature landscapes, with multiple point perspectives of the horizon line coupled with fields of abstract color formations and geometric shape, from these very productive years, are strikingly unique, evocative and remain a significant achievement in fine art painting history”.

Among his many accomplishments, two of his paintings were selected in 1976 for the American in Paris exhibition and received high honors.

Victor Santoyo also was a talented master printer and chromist. He saw a need in the artistic community and a way to make a steady income. With a family to raise, Santoyo  started a little studio where he made hand-pulled fine art serigraph prints.  Down in an old part of Los Angeles (right off of San Fernando Boulevard just south of Glendale) Victor Santoyo founded his silkscreen studio Impression Limited Atelier. In this workshop, Santoyo practiced an old and very skilled art form of creating serigraphs, also know as fine art silkscreen prints, a skill few know and fewer still can execute. Victor Santoyo created limited edition silk screens of artists’ paintings from near and far.

From 1978 until 1999 the modest studio that occupied a space in old Los Angeles was a creative meeting place for a who’s who of fine artists. Everyone from Frank Romero (The Death of Ruben Salazar, 1986), the creator of “Batman” Bob Kane, mixed media and performance artist Faith Ringgold and the Disney artist Nino Carbé spent many days working with Victor Santoyo to create serigraphs of their paintings. These hand-pulled serigraphs were unique, each one slightly different from the next even within the limited run. A painting by Senator Ted Kennedy (published by Martin Lawrence) was also one of Santoyo’s limited editions.  Some artists helped in the process of making their serigraphs, such as Frank Romero and Nino Carbé who worked closely with Santoyo on creating a limited edition of his painting of Frankenstein.

The historical significance of these meticulously crafted works is still emerging, but their importance is now well-documented in collections such as the California African-American Museum in Los Angeles as well as the Smithsonian in Washington DC.

The art of the serigraph is a long and intricate process that involves making many stencils, each one different than the next. This artistic approach of making each new run of serigraphs can take months, and can often be more difficult than creating the painting itself.

Victor Santoyo saw a need in the artistic community for a studio that could make fine-art silkscreens, and he had the rare and unique talent as well as the collaborative spirit to carry it off.  His artistic contributions go beyond his own art. His endeavors extended into and supported an emerging and vibrant artistic community from the 1970’s into 2000’s, whereby he founded a living workspace and used it to assist other artists in their creative process.

You can find out more about Victor Santoyo at www.santoyoart.com.