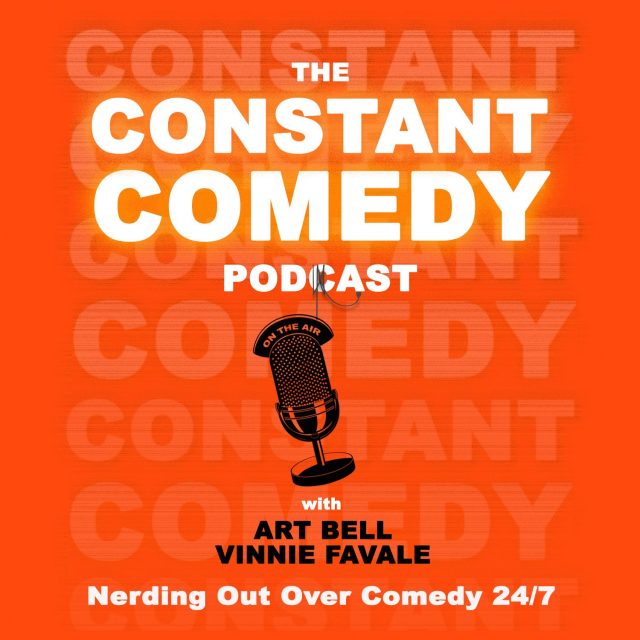 Los Angeles, California (The Hollywood Times) 4/26/2021 –  In honor of the 30th anniversary of the network’s launch, former Comedy Central executives, Art Bell and Vinnie Favale, are pulling the curtain back on the channel’s tumultuous early days in their new show, “The Constant Comedy Podcast.” The debut season consists of 12 60-minute episodes airing weekly. Based on Bell’s award-winning and bestselling memoir, Constant Comedy (Ulysses Press), “The Constant Comedy Podcast” will look at the wide world of comedy, both past, and present, as well as take listeners behind the scenes into the comedy startup on its way to becoming one of the most successful and creative purveyors of popular culture in the US.

What excites you the most about the show?

Vinnie: I love talking about comedy because it’s something we all have in common. It’s been great interviewing colleagues from 30 years ago who have all gone on to do amazing things in entertainment. I also really enjoy talking to some of my comedy heroes like Bill Persky who was a comedy factory behind three of TV’s biggest shows; “The Dick Van Dyke Show”, “That Girl” and “Kate & Allie.” It was also a thrill talking to Kevin Murphy from RiffTrax and who was the head writer on “Mystery Science Theater,” one of the first shows that Art Bell put on the air at Comedy Central.

Art: The opportunity to talk to, and laugh with, the creative and talented people who put together Comedy Central 30 years ago. We are introducing our guests, some of whom worked behind the scenes, to our listeners so they can hear how their comedy careers got started, what comedians influenced them, and what comedy means to them. Also, working with Vinnie Favale again after all these years is a dream come true.

You have a fabulous line-up of guests including comedian and actor Jonathan Katz (Dr. Katz, Professional Therapist), comedy writer Nick Bakay (voice of Salem the cat in Sabrina the Teenage Witch), five-time Emmy Award-winning writer, director, and producer Bill Persky (The Dick Van Dyke Show, That Girl), tell us about the episodes and what can people expect from you?

Vinnie: Art and I bookend each interview with a freewheeling conversation about our long history in television often related to the guest on that week’s show. For instance, when we had on Scott Carter, a prolific writer, and producer who has worked on many talk shows, it got me to talk about my experience working with David Letterman and Howard Stern.

Art: Vinnie and I start off our podcasts chatting about how we know the guest before we bring them on. When the guest is someone we worked with at Comedy Central, we spend some time sharing stories about the early days at Comedy Central, comic influences, and their careers after Comedy Central. In the case of Bill Persky, we’ll probably just sit back and listen to him talk about his role in creating some of TV’s greatest sitcoms and his incredible impact on the world of comedy over his long career.

Is comedy now an essential part of every form of social media?

Vinnie: Emphatic YES! I would say 90% of the videos on TikTok are laugh out loud funny. One of the inspirations for our podcast is the constant flow of comedy coming at us 24/7 in bite-sized pieces…especially on Twitter and TikTok. You can almost say that social media is the new “Comedy Central.”

Art: Comedy is an essential part of human communication in general. Laughter is a social lubricant, so of course, Twitter, Facebook, Instagram, and TikTok are going to be full of comedy.

Comedy is a great way to get attention, a way to say, “Hey, look at me,” and people on social media are eager to break through and stand out. Comedy’s a tried-and-true way to do that.

Take us back to Comedy Central. What did you enjoy the most?

Vinnie: Being the underdog and knowing that we had something really good coming up….like when we had the idea to carry the President’s State Of The Union speech live with comedians doing a running commentary. It was a bold and risky idea for a new network, that was largely built on reruns, to have a live three-hour event and taking on President Bush no less. I also enjoyed the creative freedom we were given to really think outside the box. I remember when Johnny Carson announced that he was going to retire a year in advance. I knew it was going to be a big deal and that as a network with a name like “Comedy Central” we had an obligation to do something really special. I knew it had to be something really special that I hoped would get Carson’s attention. I finally had what I felt was a big idea…that we should go off the air for the hour that Carson’s last show would air. I pitched it to our group and the only concern was how our advertising sales guys would feel about giving up an hour. Well, it turns out they went my idea one better…they not only supported it but they found a sponsor for the hour of dead air! We put up a message that said “Why are you at Comedy Central when you should be watching Johnny Carson’s final show? Sponsored by McIlhenny Tabasco Sauce”.

Art: Building something I knew would have an impact on the world. Whenever someone asked me what I did for a living, I was proud to say that I made millions of people laugh. What more can we hope for in our careers than to bring a little joy to the world.

Is your show nostalgic? Who are you looking forward to interviewing?

Vinnie: I would say that in most cases, comedy is timeless, and regardless of the decade, you can watch just about every sitcom and comedy classic on-demand at any time. I think that sometimes our recollections are nostalgic but we’re talking about people and shows that everyone knows and our audiences share a lot of these same memories that we have.

Art: We started out thinking we would talk exclusively to guests who worked at Comedy Channel and Comedy Central in the first five years and talk to them about those crazy early days. But we ended up talking more about their careers and comedy in general, and we’ve been approached by people in the comedy business who we haven’t met before. Recently we did a show with Wayne Federman, a comedian, and actor who just published a history of standup comedy. Vinnie and I had so much fun talking to him about comedy that we did two episodes with Wayne. So we’re hoping to broaden our podcast to include people like that.

What will people be surprised the most about your podcast?

Vinnie: I think the most surprising thing is just how quickly the hour goes by. We did one podcast with Mitch Semel who was a key figure behind the scenes of some of the biggest comedies and about 45 minutes into it we had barely scratched the surface of his amazing career. So we ended up making that a two-part episode.

Art: I think people will be surprised by how entertaining it is. Our guests are not only interesting people who tell compelling stories, but they’re also very funny. We do a lot of laughing on the podcast, and I think our guests will enjoy laughing with us. The Constant Comedy Podcast with Art Bell & Vinnie Favale is available on all podcast outlets including iTunes and Spotify.

You can get more information about Vinnie at www.vinniefavale.com and Art at
www.artbellwriter.com/.