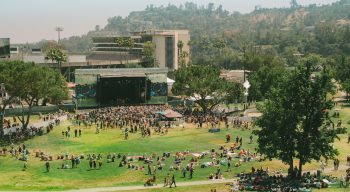 Pasadena, CA (The Hollywood Times) 6/24/18 – Last year’s sold-out inaugural Arroyo Seco Weekend was a massive hit.  So I was a bit surprised to find out this year’s event wasn’t sold out.  Still, I approached the weekend with a blend of enthusiasm and skepticism.  Taking place again near the Shady Oaks and Parkland of Brookside Country Club (adjacent to the iconic Rose Bowl), the event about exactly met my expectations.  Fun, but dotted with the kind of frustrations and delays typical of such festivals. 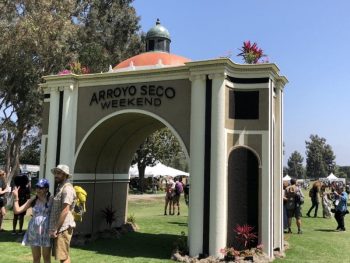 New this year, a Weekend Clubhouse VIP Pass option offered exclusive access to intimate upfront guest viewing areas at both main stages, and various other amenities.  While some guests felt the VIP option “stepped up” the game with fewer lines and free food and drinks, I found it an unnecessary $400-plus expense.  And in spite of the positive comments, the majority of guests couldn’t define the difference between VIP and standard admission, or the benefit of the costly upgrade.

The clubhouse was arranged much like a lounge; a nice place to relax from the madness of the festival.  Full bathrooms were available and a couple of full-service bars lined the premises; water and ice were readily available.

You could check your bags and chairs for later in the day. However, last night we checked bags before Neil Young was done with his set; and they closed the bag check during that time.  We were unable to get any bags checked prior to the end of his set. VIP entrances and exits were heavily monitored.  I watched one security guard follow someone who tried to slip by and respectfully escort her to the exit.  The main entrance was also strict; no selfie sticks (without a press pass) were allowed, and I wasn’t able to get my metal thermos in. 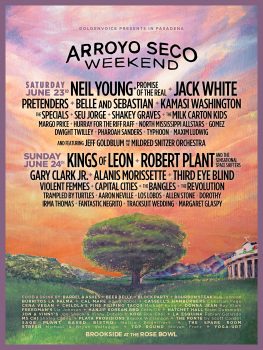 The up-front viewing areas were outstanding. Well worth the money. The staff were wonderful, accommodating and professional. Day 2 was a noticeable difference—the food and bar stands were operating much more smoothly and any discernible service lines had disappeared.  However, festival lineup sheets and maps were all distributed by mid-day, and asking staff for details didn’t yield terribly useful results.

It was of course very hot during the day—if you plan to go, don’t forget critical sunscreen, hats, and water-bottles (there are refill stations inside.)  As soon as the sun set, it became cold.  I suggest layering up for evening.

Booking a variety of acts to please everyone was a strong suit.  It was truly a family-friendly festival.  I saw a number of college students, all the way up to seniors enjoying the event.

As Variety said, “If there’s a Utopian dream to this particular festival, it’s in at least pretending there’s no musical generation gap…an ideal that, for a couple of sweaty days anyway, seemed surprisingly easy to believe.”  And LA Weekly dubbed it “a rousing success.”  I found the mix of music and company eclectic and invigorating; jazz and hard country, Brazilian tunes, and even comedic big-band acts joined the fun. 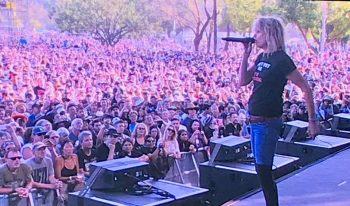 Legendary singer-guitarist Chrissie Hynde of The Pretenders was truly a highlight.  Her hour-long set on the Oaks Main Stage blew me away.  Hynde is known for being irascible at times on-stage; but she seemed to fully devote herself to the enjoyment of summer here, as she ran through 14 songs from the band’s 1980 self-titled album, through 2016’s release “Alone.

She belted out “Kid,” dedicated to Jimmy and Pete—the band’s original bass and guitar players, the late Pete Farndon and James Honeyman-Scott—and offered up classic rock radio staple “Back on the Chain Gang.”  She rendered a gorgeous vocal rendition of “I’ll Stand by You,” and dedicated “Down The Wrong Way” to Saturday headliner Neil Young, who played guitar on the “Alone” album track.  Incidentally, Young was the performer on my personal bucket list for the weekend. Hynde wrapped up her well-received set with a broad smile as she and the band, which included original drummer Martin Chambers, blazed through classic Pretenders’ songs including “Up the Neck,” “Bad Boys Get Spanked,” and “Middle of the Road.”

Saxophone legend Pharoah Sanders’ free jazz floated beautifully from the stage of the Willow tent. At 77, he moved slowly on his feet, but his fingers are as fleet as when he played in John Coltrane’s mid-’60s band.

Brazilian singer-guitarist Seu Jorge brought a lovely flavor to the Oaks stage, opening with “Umbabarauma,” the Jorge Ben classic soccer-themed song — it is World Cup season after all — and a host of other original songs. Well-known for his David Bowie covers, Jorge chose not to play any here, though he did perform a great take on “Everybody Loves The Sunshine.”

Jeff Goldblum and The Mildred Snitzer Orchestra drew a large and enthusiastic crowd to the Willow tent for big band jazz.  The actor is a talented pianist; Goldblum included signature comedy bits, including “Jurassic Park” trivia. Singer Haley Reinhart guested on vocals for a cover of Nina Simone’s “My Baby Just Cares For Me.” On a whim, Goldblum and the band covered Neil Young’s “Harvest Moon” as a bossa nova, and when he said his farewells the band played the theme to that dinosaur movie.  In other words, Jeff Goldblum can do no wrong because he’s just wonderful.

Hurray For the Riff Raff added a touch of political commentary to the festivities, with singer Alynda Segarra wearing a T-shirt the read “Yo no creo en fronteras” — I don’t believe in borders — while many of the New Orleans-based band’s songs dealt with similar themes, such as the new song “Kids Who Will Die,” inspired by a Langston Hughes poem and focused on the violence faced by the young people around the world. Scottish indie pop rock band Belle and Sebastian also gave a lovely performance.

The only negative to the performance aspect was the fact that when there are acts on both the main stages, the audience is able to hear both, creating an auditory clash.  This wasn’t a problem in 2017, so hopefully next year promoters can correct this oversight and revert back to the original setup.

The 2018 Arroyo Seco Weekend was a fairly inconsistent experience, from day-to-day.  The Festival’s strength lies in it’s ability to book incredibly versatile, and truly entertaining talent.  If that’s the experience you’re looking for, the third Arroyo Seco should be a stellar bet.  I’ll look for even more improvement to general operations next year.  In the meantime, Chrissie Hynde is still singing in the back of my mind.