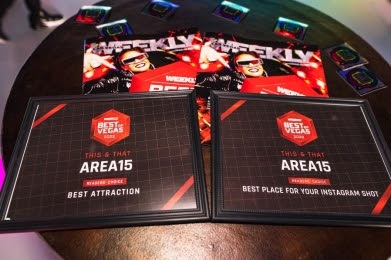 LAS VEGAS (June 2022) – AREA15, the immersive art and entertainment district located minutes from the Las Vegas Strip, has been named “Best Attraction” and “Best Place for Your Instagram Shot” for the second year in a row by Las Vegas Weekly’s Readers’ Choice Best of Vegas Awards.

The award was announced at the Las Vegas Weekly’s Best of Vegas 2022 event hosted by Greenspun Media Group and held at AREA15 and is included in the June 16 issue of the publication. The awards highlight the most noteworthy businesses in Southern Nevada in categories such as art, food, attractions, nightlife, sports and more. The Best of Vegas Awards are nominated by readers and winners are determined by popular vote.

The designation joins AREA15’s list of notable awards and accolades, including being voted number one on Blooloop’s list of “The World’s Top 11 Immersive Art Experiences.”