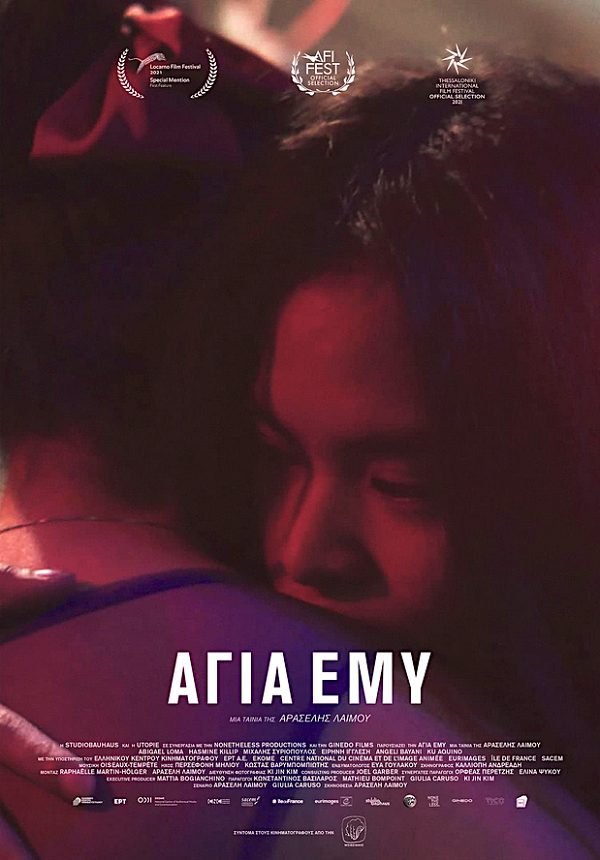 The closing night film chosen by the Los Angeles Greek Film Festival on Sunday, May 15 is Araceli Lemos’ Holy Emy (Greece, 2021), that looks more like a Filipino movie than a Greek one.

Holy Emy screened at the AFI Film Festival in Los Angeles in November 2021 – where this curious depiction of the migrant experience moves into the realm of magical realism.

In Araceli Lemos’ film, Filipina sisters Teresa and Emy find themselves facing interesting challenges when their mother leaves them in their tight-knit Catholic community in Athens to return to the Philippines. Teresa’s uncomfortable relationship with an older Greek man soon leaves her pregnant, and Emy’s continued communication with those outside her approved religious circle causes friction with their guardians. Emy, however, finds far more radical changes in her body and soul than the usual woman experiences, but the gifts she cultivates may be older than the Church. Holy Emy can still be viewed virtually at the website for the Los Angeles Greek Film Festival through May 22. Go to:  https://www.lagff.org/portfolio-item/holy-emy/

The two Filipina sister Emy and Teresa are left to fend for themselves, when their mother Pilar returns to the Philippines after some mysterious incidents in the house she used to work as a domestic help Emy and Teresa get some the help from an aunt, Linda, and the Filipino Catholic community in Athens.

Teresa works at a fish seller’s and she tries to convince the owner to hire her sister also, but Emy has an unusual condition that causes her to shed tears of blood, which ends up in a number of issues for her and her sister. As time passes, the connection between their mother’s healing powers and Emy’s situation come to the fore, while the girl ends up working at the same house, and Teresa becomes pregnant by a fish monger who seems to have some plans for her sister.

Holy Emy (Agia Emi) draws imagery from Catholic traditions and pagan rituals, exploring the idea of otherness through migrant displacement and quasi-supernatural horror. It is impossible to look away from Emy’s transformation, often manifested through the violence she does herself and others along the way. Abigael Loma’s performance simmers with rage and curiosity, as new discoveries about herself and her (lack of) place in modern Greece leads her outside conventional morality. The film’s highest points stay unflinchingly with the bloody, tear-stained effects of her work, and the long-held embraces following it.

Araceli Lemos has implemented a narrative that combines the “distortion” of the Greek Weird Wave with the magical realism frequently met in Filipino films, in a package where religion, mysticism and even magic seems to co-exist. This almost absurd amalgam does not make fully sense, and the script is not one to answer every question, but the atmosphere of disorientation and mystery it results into works exceptionally well, essentially carrying the film from beginning to end.

Unfortunately, Holy Emy has almost too much on screen, even for a two-hour film. At the same time, the comment Lemos wanted to make on sisterhood, what is magic, what is religion, and how someone who can perform miracles would experience life in Athens nowadays, and even more, how would Greeks (or anyone for that matter) interact with her, are rather evident, and given through a combination of mystery, grotesqueness, and humor that also works excellent for the movie.

Scenes progress rapidly and violently, but the effect of Emy’s gifts – or curse – on herself, Teresa, and those she encounters is never allowed to breathe before the next miracle. Holy Emy thus misses the opportunity for reflection and long-term emotional impact, though individual sequences are memorable.