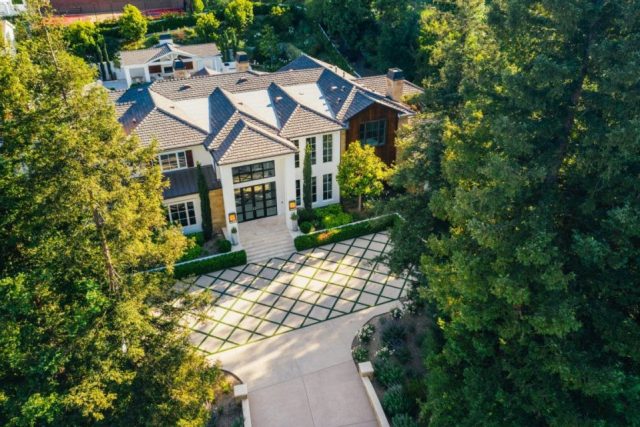 “Madonna Buys Weekend Mansion”
Madonna has a new place to enjoy her weekends, paying $19.3 million for The Weekend’s L.A. mansion. Built in 2016 at almost 14,000 square feet spread across three acres, the seven-bedroom, 11-bath property includes a two-bedroom guest house, a large barn, and a five-car auto gallery. Amenities include a basketball court, gym, pool, spa, a cabana with its own living room, home theater, a bar for entertaining, and a dramatically lit wine room.

“Bryan Cranston Is His Bad Self In California Home Sale”
Bryan Cranston made quick work of selling his 2,450-square-foot California beach house. The Breaking Bad star sold the home for $5.45 million in just a couple of weeks, well over his asking price of $4.95 million. Bryan helped design the home along with his wife, Robin Dearden, and their friend-designer, John Turturro. The three-bedroom, ocean-view home is built on the site of a 1940’s home they bought in 2007 for $2.5 million. The trio used eco-friendly materials, titanium circular towers, hydronic and solar panels to rebuild the home.

“Pete Davidson Gets His Own Apartment”
After living for the last three years in the basement of a New York home he bought for his mother, Saturday Night Live star Pete Davidson has his own place. Pete recently paid $1.2 million for a two-bedroom apartment on Staten Island and has already moved in. The apartment includes an open floor plan with city and water views.

“’Heard It Thru the Grapevine’ – John Fogerty’s Home For Sale”
John Fogerty was a “Fortunate Son” with his tremendous musical talents and became one of rock ‘n’ roll’s biggest stars. His San Fernando Valley estate with 9,000 square feet, a fountain-fed swimming pool, eight bedrooms, spa, outdoor kitchen and a rooftop deck, where he probably saw a few “Blue Moon Nights,” is for sale at $9 million.

“Jerry Seinfeld’s Colorado Ski Home”
Jerry Seinfeld has listed his 27-acre mountain home in Telluride, Colorado for $14.95 million.  The 11-bedroom, 12,300-square-foot home was built in 1991 and purchased by the Seinfelds in 2007.  Home features include a gym, yoga studio, and private trails. There is a separate guest home too. Tom Cruise’s  320-acre estate in Telluride is also for sale, asking $39.5 million.

“Kanye West’s Monster Lake Wyoming Ranch”
Known as Monster Lake Resort Ranch, Kanye West bought his Wyoming ranch with over 4,500 acres in 2019 for $7.7 million. After his divorce from Kim Kardashian, Kanye plans to live at his ranch while Kim gets to keep their $20 million L.A. home.

“Sold! Casey Kasem’s Mansion & Heart-Shaped Pool”
The late Casey Kasem’s Beverly Crest home has sold for $34 million. The eight-bedroom home on 2.5 acres in one of Beverly Hills’ most exclusive neighborhoods was listed at $39.9 million. One of the 12,000-square-foot home’s best features was a heart-shaped pool. Located near the Playboy Mansion and a number of celebrity homes, the 1954 home is likely a tear-down to make room for an even bigger mansion and probably no heart-shaped pool.

“Judy Garland’s Malibu Beach House”
The Malibu beach house where Judy Garland lived with her second husband, Vincente Minnelli, and their daughter, Liza, shortly from when it was built in 1947 into the 1950s is for sale. Completely rebuilt in 2013, it is priced at $3.895 million.

“Rob Lowe Goes Montecito House Crazy – Buys Three Homes”
Rob Lowe and his wife, Sheryl Berkoff, have recently purchased three homes in the celebrity hot spot of Montecito. Rob & Sheryl sold their own longtime Montecito family home last year for $44.5 million and then spent $47 million for the three homes, including a six-bedroom beach home, a fixer-upper that is closer to town, and another home that is very near the Harry and Meghan $14 million mansion.

“Kevin James Brings His Kingdom To Florida”
The star of The King of Queens has purchased a home on Florida’s oceanfront. A native New Yorker, Kevin paid $18 million for the almost 12,000-square-foot oceanfront home in Delray with six bedrooms and a guest house. This is the second Delray home for Kevin, who sold a similar home in 2016 for $26.4 million.