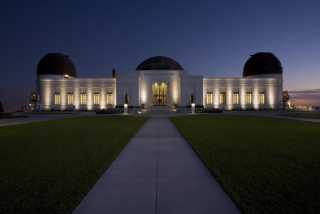 At the Iconic Crown on the Crest of the Hollywood Hills, the Historic Moon Landing Celebrated by the Friends Of The Observatory

“The biggest benefit of Apollo was the inspiration it gave to a growing generation to get into science and aerospace.”           – Astronaut Buzz Aldrin

At the Griffith Observatory, the iconic crown of Los Angeles, Friends Of The Observatory (FOTO) hosted a special screening of CNN Films’ Apollo 11 documentary by Todd Douglas Miller followed by an after-hours moon party on the roof. The newly discovered 70-mm film documents in exquisite detail the historic moon landing. By balancing the emotion of the extended Apollo team with the mechanics of the technical execution, the brilliance of the Apollo 11 is revealed. Moreover, being able to see such a film in the context of the Observatory and its impressive array of exhibits took the experience to the next level of excellence and lasting meaning.

Before the film began in the Leonard Nimoy Event Horizon Theater, FOTO president Grady Smith introduced the event, giving thanks to the Observatory staff and the ongoing support of FOTO members. A senior portfolio manager and vice president at Dimensional Fund Advisors and a member of the Investment Strategies group, Grady Smith loves giving back as part of the FOTO team. Indeed, he is honored to support the continuing science education efforts at Griffith Observatory.

When asked why he chose to support FOTO, Grady Smith smiled and said, “You have to understand that the documentary we just saw expresses the answer to that question so well. It brought me back to my childhood when I was so inspired by the Mercury and the Apollo missions. Nothing was more exciting! Watching NASA and those brave astronauts succeed against such incredible odds took my breath away. Reliving it again tonight reminded me why supporting the Griffith Observatory is so crucial to help both today’s kids and future generations.”

With moonrise in Los Angeles county at 10:09 pm, the event allowed for both the screening of the film and an after-hours moon party on the roof of the Observatory. FOTO members and visitors mingled as refreshments were enjoyed and stories were exchanged. A key question asked by many was, “Do you remember where you were during the moon landing?” Although almost all of the FOTO board members could recall in detail the impact of the moon landing on their lives, many of the attendants were not even born or were little children at the time of this historic event. Hence, it was moving to see how the resonant documentary brought back a flood of positive memories that different generations got to share with each other.

The events on the rooftop were orchestrated by Dr. Laura Danly, the respected American astronomer who is the Curator of the Griffith Observatory. A former Hubble fellow, Dr. Danly previously served as chair of the Department of Space Sciences at the Denver Museum of Nature & Science. With her team, she put together the Griffith Observatory celebration of the moon landing by curating ten days of special programs, exhibits, family activities, and photo opportunities. Her passion for astronomy and the lasting importance of the Apollo missions resonated throughout the night.

When asked what the celebration of the Golden Moon Festival and the Apollo Landing meant to her and her team, Dr. Laura Danly said, “Our Observatory is about exploration and understanding our place in the universe. There is nothing like those first steps taken by the Apollo astronauts to help us connect with that spirit of exploration. This documentary intimately connects us to that moment in time.”

On the rooftop, attendees were able to look at the golden moon once it had risen in the sky through the Observatory’s historic Zeiss telescope. Prior to that opportunity, a secondary telescope was focused on Jupiter and three of the moons of the biggest planet in our solar system. When combined with the excellent array of refreshments, ranging from fine wines to pastries from Canter’s bakery, the night was a resounding success from start to finish. The realization of such an achievement is connecting the present-day mission of the Griffith Observatory with the historical underpinnings of space exploration. Driving home with the bright moon looming above, each of us felt connected to the moon landing, a time of astounding human achievement that will never be forgotten.