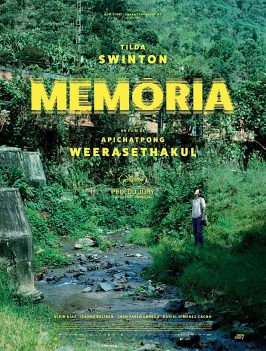 Los Angeles, CA (The Hollywood Times) 4/11/22 – Last night’s screening of Apichatpong Weerasethakul’s first (kind-of) English-language feature, Memoria (Thailand/Colombia, 2021) at the Landmark Nuart Theatre in West Los Angeles was well-attended. Set in Colombia and is mostly in Spanish, it has been a long time in coming to a theatre here.“Memoria” is a serious reflection on sound and the philosophical terrain that Thai filmmaker Weerasethakul is used to traversing in his films. The protagonist, Jessica (Tilda Swinton), spends much of the film speaking in a Spanish that she deferentially excuses for being poor but suits her purposes just fine. A Scottish orchid farmer traveling in Colombia, Jessica gets caught up in an unraveling mystery that centers the eruption of the arcane and spiritual into the modern world – not unlike Weerasethakul’s Uncle Boonmee Who Can Recall his Past Lives (2010), only with a bit of a sci-fi, media-centric twist.

The story begins with Jessica hearing a sudden, overpowering boom in the wee hours of the morning, jolting her out of bed in her apartment in Medellín. Throughout, Weerasethakul’s modus operandi is to keep his characters in long shot and linger well after the event that other directors would cut on. His cuts feel almost like delayed reactions to the actions of the story. In Memoria, this logic of cause and delayed effect even extends to the world of the story. Well after Jessica has heard the boom and timidly peeked out her window for its origin in vain, we get an extended shot of a parking lot as all the car alarms abruptly trigger – perhaps a mysteriously belated reaction to whatever physical phenomenon caused the boom.

The film made its debut at the Cannes Film Festival earlier this year, and was awarded the Grand Jury prize. The film was the Colombian entry for Best International Feature Film at the 2022 Academy Awards, but largely overlooked due to its lack of distribution. However, Weerasethakul teamed up with Neon for a novel distribution method befitting one of slow cinema’s modern masters. Weerasethakul wants his film Memoria to be viewed as a traveling art exhibit. Neon explained that the film will be “moving from city to city, theater to theater, week by week, playing in front of only one solitary audience at any given time.” It will only be available to watch in theaters, not streaming or on demand. Neon founder and CEO Tom Quinn explained that this unconventional choice was put into action to “build a sort of traveling mecca of cinema that has the capacity to stop us in our tracks.” Weerasethakul seconded that notion, explaining that “For Memoria, [the] cinema experience is crucial or maybe the only way. Let’s embrace the darkness and dream, one at a time.”

In this film, Weerasethakul considers the idea that sound is a vibration that doesn’t die but simply drops below perceptual thresholds. 18th-century scientists once speculated that every sound that had ever been produced on Earth was still out there, somewhere. It has been speculated more recently by researchers that cultures without analog technologies recorded themselves by accidentally embedding conversations into the lines of pottery, like the grooves of a record. If sound is a physical phenomenon, then perhaps the voices of the past can be heard through a receiver of sorts with the storage capacity to bring them into the present.

Near the beginning of the film, we are in Bogotá, where Jessica’s sister Karen (Agnes Brekke) is in hospital. Early scenes quietly establish a bond and a distance between these two – shared experiences fractured by divergent perspectives. As the “rumble from the core of the Earth” continues to unsettle Jessica, she finds a sound engineer, Hernán (Juan Pablo Urrego) at the National University of Colombia. He tries to help her determine what this sound is that she keeps hearing and that she describes as sounding like a huge ball falling into a container “surrounded by seawater.” They explore a bank of stock movie sound effects, eventually discovering something eerily close to the sound she’s been hearing. We spend a long time watching the pair simply listening, Jessica with bated breath, to the digital files, the stillness of the studio turning each subtly different boom into a reverberation that shocks the characters into stunned, contemplative silence. Later he accompanies Jessica to look at quality refrigerators for best storing orchids, but then disappears without trace, as if he were never there. Was he, like that enigmatic boom, a figment of her imagination?

18 years ago, Swinton wrote to Weerasethakul, expressing her admiration for Tropical Malady. Memoria marks both their long-awaited collaboration and also Weerasethakul’s first feature outside Thailand. “We tried to understand the history and memories of the place,” Weerasethakul says of Colombia. “Tropical Malady was really personal and full of my own memories, but Memoria was an interpretation. It was about an absorption of other memories.”

In Medellín, Jessica has flown over to research botany, and to visit her sister, Karen, who is in hospital with a mysterious illness. However, Jessica suffers from her own atypical malady: An bang noise occurs in her head at unexpected moments. In turn, she investigates Colombia as if she doesn’t belong to the same planet. Swinton, of course, has previously embodied extra-terrestrial creatures (Friendship’s Death), immortal beings (Only Lovers Left Alive, Suspiria), and whatever The Ancient One is (Doctor Strange). “My reference of Tilda is firstly as a friend, and then as someone who appeared in a Derek Jarman film (Blue),” Weerasethakul said. “I’m not familiar with her other work, except that period, and also Orlando.” “When we worked on Memoria, the idea of (her background playing) aliens didn’t come up, but maybe the idea of disconnection, that she’s not totally grounded, and is in between worlds. She came up with a certain spirit that made me see the film’s rhythm and its heart – without talking, but showing me.”

Jessica’s discovery that her memories of reality are starting to differ from those around her carries a comic tinge, as in a debate with her sister (Agnes Brekke) over whether their acquaintance, “Andrés the dentist,” died last year or not. But the film is serious in its reflection on whether there’s a spirit world, even if it’s just a generalized worldly memory, that persists beneath the façades of urban modernity. It’s as if her entire existence has been slightly displaced. She wanders the streets of Bogota until she’s finally away from the noise of the city. Maybe here she can to get the bottom of what’s happening? Probably not. Following a visit to a doctor who’s more into Jesus than medicine, Jessica encounters another Hernán (Elkin Diaz), a man who has never seen a film, or listened to music, or even left his village because he remembers everything and could be the solution to the mysterious sound.

Swinton proves to be miraculously in sync with Memoria’s offbeat tone and pace, as Jessica comes off as mysterious as the noises she hears. Gaunt, soft-spoken, and seeming perpetually out of place, she suggests a specter. In one dialogue-free and nearly contextless scene, we catch her at an art gallery, mutely gazing at paintings of dark ghostly figures with glowing white eyes, who look somewhat like negative images of her – and not entirely unlike the spirits in Uncle Boonmee Who Can Recall his Past Lives. The constant mix of curiosity and trepidation that Swinton conveys helps to sustain the film’s engaging mystery.

Without spoiling too much, the enigma of the noises – which in Memoria’s most unsettling scene occur repeatedly while Jessica is at dinner and go unnoticed by her companions – leads her into the Amazon jungle, where an encounter with a man also named Hernan (Elkin Díaz), older but possibly the same Hernán who helped her replicate the sound that woke her from her slumber, begins to reveal what the vibrations in the ether signify. In some respects, this is a trying sequence, for slowing the film to a crawl just as its reaches a narrative crescendo, the extended conversation with the older Hernan brings Jessica toward a confrontation with the horrors of the past that linger in the air and the stones on the ground.

Tilda Swinton observes this man, Hernán, the fish scaler, along a creek in the rainforest. Hernán claims he cannot dream. Per Jessica’s request, he cradles himself next to a river, shuts his eyes, and eventually drifts off. The “action set-piece”, shot as a lengthy take, would be arduous, if not unimaginable, in the hands of most directors, but under Weerasethakul’s guidance, it’s a magical, time-manipulating reminder of why the theatrical experience will always trump streaming.

In the final act, as the film becomes more symbolic and less linear, Tilda Swinton as Jessica holds it together for the viewer, keeping us connected to the immediacy of what’s happening to her. Memoria is a sensory experience, but it takes a performer like Swinton to amplify Weerasethakul’s technique. We’re not just hearing the babbling brook and chirping birds on a soundtrack. We’re hearing them through Jessica’s ears. There’s certainly a powerful element of transcendence in Jessica’s encounter with a solitary time-slipped soul in whose company she faces quietly stunning revelations about life, the universe and everything. It’s at this point that the film takes a fantastical leap that viewers will find either breathtaking or ridiculous. As with his 2010 Palme d’Or winner Uncle Boonmee Who Can Recall His Past Lives, Weerasethakul leaves us on the edge of uncertainty, providing just enough terra firma to keep the viewer engaged while leading them deeper into the realms of the unknown.

Memoria is Weerasethakul’s reunion with Sayombhu Mukdeeprom, the cinematographer who lensed the director’s early work up to Uncle Boonmee; in the decade since, Mukdeeprom was the DoP on Luca Guadagnino’s Call Me By Your Name and Suspiria. “(After Call Me By Your Name) I think he’s been more free to interfere very little with my process… He supports very well, now, my use of minimal lighting. Actors shouldn’t be bothered by lights. They should be able to walk and explore their environment in long takes. He has to be discreet, and he delivers.”

While Jessica avoids lengthy monologues about colonialism, Colombia’s history is present through the openness of Mukdeeprom’s camerawork. “I knew that the political subtext would be there,” Weerasethakul says. “I had to be careful as a foreigner in how to approach it, and be respectful to people’s memory. Jessica’s like cinema: she’s collecting sound and images, that’s all. The awareness of the trauma is already there in the audience, so it’s really active in terms of how the audience makes it work.”

Weerasethakul is considering shooting his next film in Mexico, but first there’s the unexpected controversy over Memoria’s release. Neon’s so-called “Never-Ending Theatrical Tour” in America means that it’ll only play one cinema at a time, moving from city to city, week by week. In an age when Dune went straight to HBO Max on its day of release, it’s a rarity for such a small film to reject streaming. However, Memoria could become unavailable to people who are disabled, scared of COVID, or not geographically near a screening.