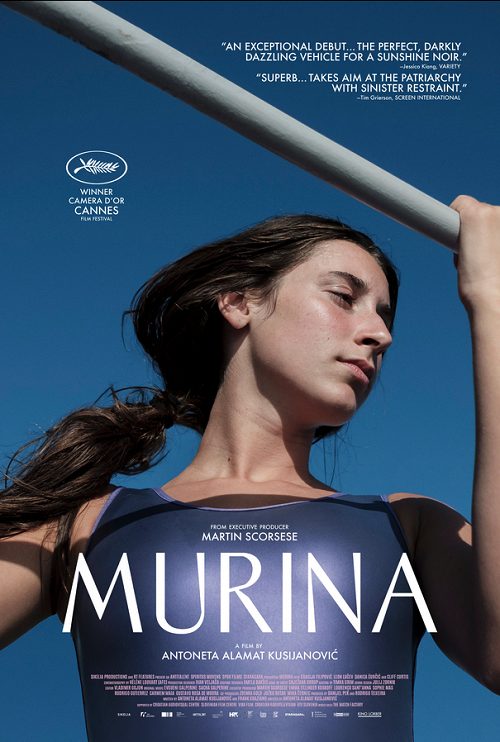 Opening at the Laemmle Monica Film Center on July 15 is Murina (Croatia, 2021), directed by Antoneta Alamat Kusijanović and produced by Martin Scorsese.

In this film, a sixteen-year-old Croatian girl (Gracija Filipovic) lives in a village on the Adriatic Sea on an island near Dubronić. She decides to replace her controlling father with his wealthy foreign friend who dotes on her beautiful mother. Murina first opened at the Cannes Film Festival in 2021 and received the Golden Camera award. In April 2022, Murina was the opening night film of the annual South East European Film Festival (SEE Fest) at the Laemmle Fine Arts Theatre in Beverly Hills.

Murina is a murky, vaguely sinister coming-of-age film about a young woman’s blossoming sexuality under the spell of her mother’s old flame. Above the surface of the water, 16-year-old Julija’s (a stony Gracija Filipovic) life seems idyllic, suspended in one of those shimmering, endless summers that only seem to exist in European cinema. In their sleepy Croatian fishing town, Julija and her young mother Nela (Danica Curcic), who barely looks 10 years older than her daughter, live a simple life guided by their ancestral tradition of catching eels and wiling away sun-bleached days on their boat. Hovering over their halcyon ways is the imperious presence of their rough-around-the-edges, psychologically abusive patriarch Ante (Leon Lucev).

Julija’s father Ante (Leon Lucev) owns land that he’s hoping to sell to Javier (Cliff Curtis), a wealthy former employer (and sometimes friend) so that he can make a big score and move to Zagreb. Domineering and under tremendous stress as the potential sale approaches, her father barks orders at Julija and her mother (Danica Curcic); mom goes along and makes excuses for his behavior. “He needs this,” she says. “If he gets this deal, he’ll be calmer.” “If he gets money, he’ll be worse,” says Julija, who wears a perpetual look of sullen annoyance that seems entirely warranted every time her father opens his mouth.

In that setting, the urbane Javier seems to Julija to be everything her dad is not: open-minded, encouraging of her desires to leave her constricted life, supportive rather than dismissive. The arrival of family friend Javier (Cliff Curtis, the New Zealand actor who supplies much of the film’s English dialogue) throws their tenuous equilibrium wildly out of orbit. Past romantic vibes between Javier and Nela bubble up, while Javier takes an obvious interest in the virginal Julija, forming a fraught triad that pits mother and daughter against each other as Nela starts behaving like a jealous girlfriend. Ante, meanwhile, holds Julija’s academic future over her head, and keeps a too-tight grasp on her thoughts and doings at all times.

Filipovic’s carefully calibrated, always-under-the-surface performance keeps the dynamic from spilling into the volcanic catharsis that this understated movie might need. She sulks around their village not saying much because her spirit is squelched and afraid. Javier brings some intrigue, including a challenge to find an elusive “blue light” in the sea. He does share a piece of lore about a boy who swam from one island to another to become a man; that becomes a tantalizing source of inspiration for Filipovic, and one that gets realized in a moving coda at the film’s end.