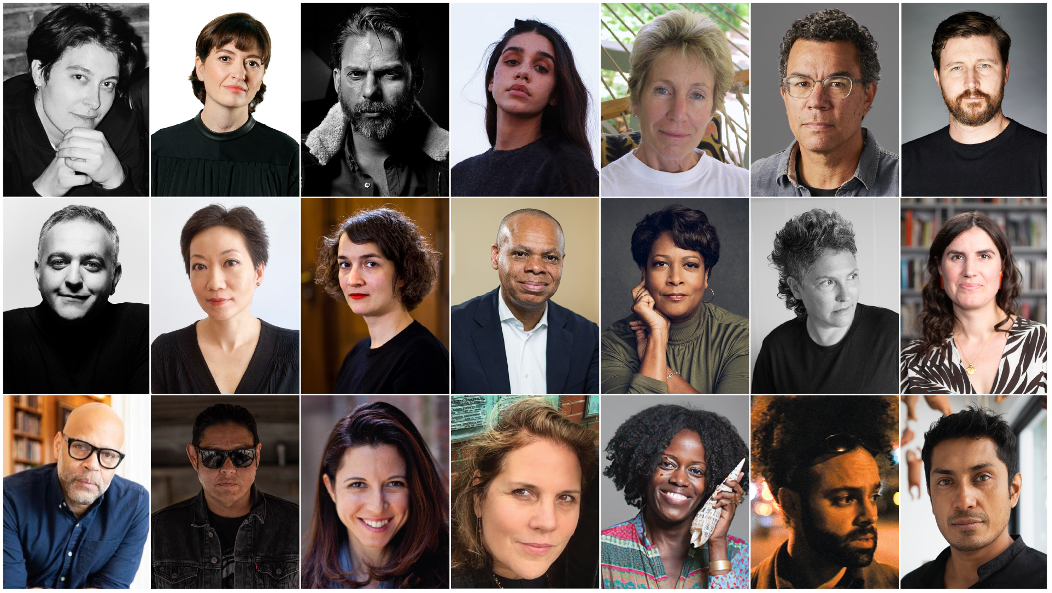 Park City, UT — The nonprofit Sundance Institute announced today the members of the six juries awarding prizes for artistic and cinematic achievement at the 2022 Sundance Film Festival. Also announced was the jury for the Alfred P. Sloan Film Prize.The Festival takes place January 20-30 via our enhanced online platform at Festival.Sundance.org and in person at seven Satellite Screens venues around the country during the Festival’s second weekend.

Sixteen celebrated voices across film, art and culture will bestow this year’s awards on feature-length and short films which will be announced on January 28. Festival audiences have a role in deciding the 2022 Audience Awards, open to films in the U.S. Competition, World Competition and NEXT categories, as well as the Festival Favorite, which is selected across the full feature film program. Award-winning films will be available for special extended-run viewing the closing weekend.

The jury for Alfred P. Sloan Feature Film Prize is Dr. Heather Berlin, Dr. Mandë Holford, PhD, Tenoch Huerta, Lydia Dean Pilcher, and Shawn Snyder. They deliberated in advance of the Festival and awarded the Prize to After Yang, directed by Kogonada.

The jury for Alfred P. Sloan Feature Film Prize is Dr. Heather Berlin, Dr. Mandë Holford, PhD, Tenoch Huerta, Lydia Dean Pilcher, and Shawn Snyder. They deliberated in advance of the Festival and awarded the Prize to After Yang, directed by Kogonada.

Following are the 2022 Sundance Film Festival Jury members and their respective sections:

Chelsea Barnard is a producer based in Los Angeles. She most recently produced Mike Mills’ C’mon C’mon and, prior to that, Olivia Wilde’s Booksmart. Barnard previously served as president of film and chief creative officer at Annapurna Pictures, overseeing films such as Her, Foxcatcher, Wiener-Dog, 20th Century Women, Phantom Thread, The Sisters Brothers, and If Beale Street Could Talk.

Marielle Heller is an award-winning director, writer, and actor. Her humanistic directing style is depicted in her Academy Award–nominated films A Beautiful Day in the Neighborhood and Can You Ever Forgive Me?. Her directorial debut, The Diary of a Teenage Girl, earned her an Independent Spirit Award. As an actor, her Alma Wheatley in The Queen’s Gambit made her an instant audience favorite. Heller’s production company, Defiant By Nature, was established in 2019.

Payman Maadi is one of the most important Iranian American actors, screenwriters, and directors working today. He is best known for starring in the Academy Award–winning film A Separation and About Elly by director Asghar Farhadi. For his role in A Separation, Maadi won the Silver Bear for Best Actor at the Berlin Film Festival. His recent film credits include Night Shift, 6 Underground, 13 Hours, Camp X-Ray and Just 6.5, and his recent TV credits include HBO’s The Night Of and Westworld.

Garrett Bradley works across narrative, documentary, and experimental modes of filmmaking to address themes such as race, class, familial relationships, social justice, Southern culture, and the history of film in the United States. In 2020, Bradley became the first Black American woman to receive the Directing Award in the U.S. Documentary Competition at the Sundance Film Festival for her debut feature-length documentary, Time, which was also nominated for Best Documentary Feature at the 2021 Academy Awards.

Joan Churchill is dedicated to making experiential films. She endeavors to throw the viewer into a firsthand experience with a subjective camera style that actively participates in the story, yet takes second place to the participants themselves. The first pure documentary cinematographer to be accepted into the American Society of Cinematographers, Churchill’s accolades include DOC NYC Visionaries Tribute Lifetime Achievement Award, a BAFTA Award, duPont–Columbia University Award, Prix Italia, and the IDA Award for Outstanding Cinematography.

Peter Nicks is an award-winning cinematographer/director known for his immersive camerawork and cinema vérité style. He helmed the critically acclaimed feature documentary The Waiting Room and won the 2017 Sundance Film Festival’s U.S. Documentary Directing Award for The Force. Homeroom completes a trilogy of timely, immersive documentaries exploring the interconnected narratives of health care, criminal justice, and education in Oakland, CA. Nicks received his B.A. in English from Howard University and his master’s in journalism from UC Berkeley.

Andrew Haigh is a writer and director from the U.K. His award-winning films include Weekend (2011), 45 Years (2015), and Lean on Pete (2017). His television work includes the HBO series Looking, and, most recently, The North Water, a five-part limited series for BBC/AMC+.

Mohamed Hefzy is an Egyptian screenwriter and producer with an evolving filmography of 35 features, including Microphone (2010), Clash (2016), Sheikh Jackson (2017), and Luxor (2020). He has served as a jury member for various international festivals and is the president of the Cairo International Film Festival. He is also the founder of Film Clinic, a pioneering production house in the MENA region, and its distribution arm Film Clinic Indie Distribution, and is the co-founder of Meem Creative Circle.

Emilie Bujès is the artistic director of Visions du Réel, International Film Festival Nyon; artistic advisor for Cannes Film Festival Directors’ Fortnight; and expert for the film fund visions sud est. She previously was a curator at the Geneva Contemporary Art Center and contributed to festivals and art institutions such as the Contemporary Art Centre Vilnius, La-Roche-sur-Yon International Film Festival, and Transmediale (Berlin). She has been a guest lecturer at several art universities. In 2014, she received the Swiss Art Award for curators.

Dawn Porter is an award-winning filmmaker whose work has screened at two Sundance Film Festivals and has appeared on HBO, PBS, Netflix, and more. She recently directed and executive produced an Apple TV series on mental health with Oprah Winfrey and Prince Harry. Recent credits include Rise Again: Tulsa and the Red Summer (National Geographic), The Way I See It (Focus Features), and John Lewis: Good Trouble (Magnolia Pictures). She is currently working on a documentary series with Showtime Networks about the United States Supreme Court.

Joey Soloway created I Love Dick and the Emmy- and Golden Globe–winning Transparent. Soloway is currently developing The South Commons Experiment, about growing up in a “racial utopia;” a trans version of Little Darlings with Paramount; and a biopic of Sally Ride with Lionsgate. They won the Directing Award at the 2013 Sundance Film Festival for their first feature, Afternoon Delight. This year they will launch The Amtlai Tapes, a podcast unraveling the mysteries of Abraham’s mother.

Blackhorse Lowe is a filmmaker from the Navajo Nation. His work has garnered accolades internationally at prominent festivals, including the Sundance Film Festival and the Tribeca Film Festival. Recently, he directed episodes for the groundbreaking series Reservation Dogs, created by Sterlin Harjo and Taika Waititi. Lowe is a current Tulsa Artist fellow and is in development for an epic feature, Lords of the Earth.

Dr. Heather Berlin is a neuroscientist, clinical psychologist, and Associate Clinical Professor of Psychiatry and Neuroscience at the Icahn School of Medicine at Mount Sinai in New York. A passionate science communicator, Berlin has hosted series on PBS and the Discovery Channel and co-wrote and starred in the critically acclaimed Off-Broadway and Edinburgh Fringe Festival shows, Off the Top and Impulse Control. She appears regularly on StarTalk with Neil deGrasse Tyson, the History channel, Netflix, and National Geographic.

Tenoch Huerta is a Mexican actor, writer, and film producer. He’s best known for his performances in Narcos: Mexico, The Forever Purge, Days of Grace, Sin Nombre, and Güeros, for which he won the Ariel Award for Best Actor, presented by the Mexican Academy of Cinematographic Arts and Sciences. Huerta combines his professional career with activism against racism and discrimination.

Lydia Dean Pilcher is a writer, director, and two-time Emmy-winning and Academy Award-nominated producer. Most recently, she directed the feature A Call to Spy, a female-driven World War II spy thriller based on the true stories of Noor Inayat Khan, Vera Atkins, and Virginia Hall. In 2018, she co-directed the feature Radium Girls. She has produced over 40 feature films, including 12 with internationally acclaimed director Mira Nair.

After receiving a bachelor’s degree in Religion from Harvard, Shawn Snyder spent his 20s as an itinerant singer/songwriter. In 2015, he completed studies at NYU’s Graduate Film Program and in 2016 was named one of Filmmaker magazine’s “25 New Faces of Independent Film.” To Dust, his Sloan-supported debut feature, won both Best New Director and the Narrative Audience Award at Tribeca in 2018, and was later nominated for Best Screenplay at the 2020 Independent Spirit Awards.

The Sundance Film Festival
The Sundance Film Festival has introduced global audiences to some of the most groundbreaking films of the past three decades, including Flee, CODA, Passing, Summer Of Soul (…or, When the Revolution Could Not Be Televised), Clemency, Never Rarely Sometimes Always, Zola, On The Record, Boys State, The Farewell, Honeyland, One Child Nation, The Souvenir, The Infiltrators, Sorry to Bother You, Won’t You Be My Neighbor?, Hereditary, Call Me By Your Name, Get Out, The Big Sick, Mudbound, Fruitvale Station, Whiplash, Brooklyn, Precious, The Cove, Little Miss Sunshine, An Inconvenient Truth, Napoleon Dynamite, Hedwig and the Angry Inch, Reservoir Dogs and sex, lies, and videotape.

Sundance Institute
As a champion and curator of independent stories for the stage and screen, Sundance Institute provides and preserves the space for artists in film, theatre, film composing, and digital media to create and thrive.
Founded in 1981 by Robert Redford, the Institute’s signature Labs, granting, and mentorship programs, dedicated to developing new work, take place throughout the year in the U.S. and internationally. Sundance Collab, a digital community platform, brings artists together to learn from each other and Sundance advisors and connect in a creative space, developing and sharing works in progress. The Sundance Film Festival and other public programs connect audiences and artists to ignite new ideas, discover original voices, and build a community dedicated to independent storytelling. Sundance Institute has supported such projects as Clemency, Never Rarely Sometimes Always, Zola, On The Record, Boys State, The Farewell, Honeyland, One Child Nation, The Souvenir, The Infiltrators, Sorry to Bother You, Won’t You Be My Neighbor?, Hereditary, Call Me By Your Name, Get Out, The Big Sick, Mudbound, Fruitvale Station, City So Real, Top of the Lake, Between the World & Me, Wild Goose Dreams and Fun Home. Join the Sundance Institute on Facebook, Instagram, Twitter and YouTube.