California Earthquake Authority offers affordable earthquake insurance, other steps to take before the next damaging earthquake

Although the quake’s epicenter was on the White Wolf fault in the southern San Joaquin Valley—a fault that had not been considered such a threat—people in far reaches of the state and as far away as Las Vegas felt its shaking. Multiple strong aftershocks occurred as well, including a particularly destructive magnitude-5.8 aftershock a month later.

“This anniversary serves as a reminder that it’s wise to take steps to be prepared for quakes, which come with no warning,” said Glenn Pomeroy, CEO of the California Earthquake Authority (CEA), the country’s leading provider of residential earthquake insurance. “History shows that damaging earthquakes can happen across California at any time.”

The Kern County earthquake damaged buildings in Bakersfield, disrupted agriculture near the town of Arvin, destroyed a portion of rail line near Bear Mountain and even damaged a building in San Diego. It claimed 12 lives and caused at least $50 million in property damage* (the equivalent of $458 million today, without adjusting for significant changes in the area’s population density, building types and other factors).

Kern County residents today are very well positioned to protect themselves financially from costly property damage caused by earthquakes. Although costs to rebuild homes have increased greatly over the years, CEA rates have decreased by nearly 55 percent. And Kern County’s earthquake insurance rates are lower than those in most areas of the state, reflecting the county’s lower risk of damaging earthquakes. In addition, CEA’s expanded deductible options and flexible coverage limits allow policyholders to tailor their earthquake coverage to fit different needs and budgets.

To learn about the variety of affordable earthquake insurance options available for homeowners, mobilehome owners, condo unit owners and renters in Kern County and elsewhere in the state, use CEA’s premium calculator.

Besides earthquake insurance, all Californians can take steps to prepare for earthquakes, such as securing their space, creating a disaster plan, organizing disaster supplies, strengthening their property and participating in what has become the world’s largest earthquake drill, the Great California ShakeOut. For more information, visit CEA’s website atEarthquakeAuthority.com.

* Information about this earthquake’s magnitude and the damage it caused came from the Southern California Earthquake Data Center website. 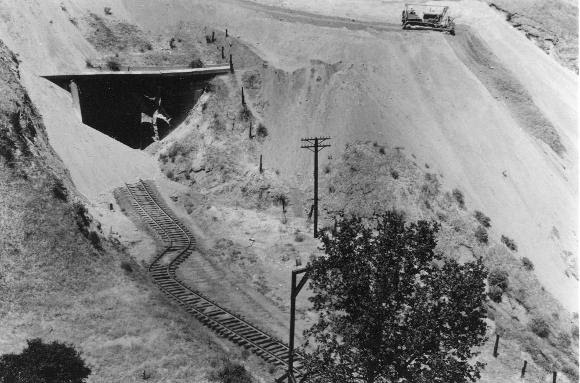 The 1952 Kern County earthquake damaged a section of Southern Pacific Railroad line near the town of Bealville. Note the sharp bend in the track and the landslide covering the track closer to the tunnel’s entrance.