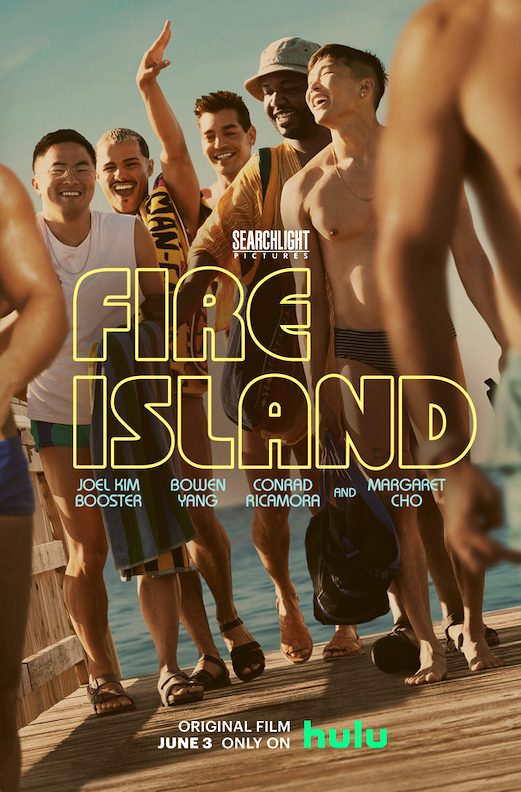 Los Angeles, CA (The Hollywood Times) 7/15/22 – Just added to the lineup at Outfest 2022 is Andrew Ahn’s Fire Island (2022), a modern day rom-com that writer and narrator Joel Kim Booster has made a verbal and visual shout-out to Jane Austen’s Pride and Prejudice. Set in the iconic Pines on Fire Island in New York, the story centers around two best friends (Joel Kim Booster and Bowen Yang) who set out to have a legendary summer adventure with the help of cheap rosé and their cadre of eclectic friends. Right from the start, a character later quotes everyone’s favorite Emma adaptation, Clueless –and this sparkling tale of star-crossed love affairs on a beach vacation treats “romantic” and “comedy” with equal importance. The fact that its entanglements, misunderstandings, and reconciliations occur among an almost entirely all-male cast serves merely to put a new meaning to the “Pride” in Pride and Prejudice.

First-time screenwriter Joel Kim Booster establishes a world in which smartphones and written correspondence can co-exist and where two unlikely partners can find each other by virtue of being the only two people for miles around who want to talk about literature. For all the hook-up apps, Charli XCX remixes, and six-pack abs on display, Fire Island is still the kind of movie where arguing about the short fiction of Alice Munro counts as foreplay.

For commitment-phobe New Yorker Noah (Joel Kim Booster), his annual sojourn to gay resort Fire Island is a chance to reconnect with what Tales of the City author Armistead Maupin would call his “logical” (as opposed to “biological”) family: BFF Howie (Bowen Yang), who moved off to San Francisco; brash and boisterous Luke (Matt Rogers, “I Love That For You”) and Keegan (Tomás Matos); and deadpan intellectual Max (Torian Miller). None of them have the kind of high-paying careers or trust funds that would actually enable this kind of vacation. They scrape it together thanks to the largesse of Erin (Margaret Cho), their friend group’s lesbian matriarch, who bought a house on the island with the proceeds of a lawsuit settlement.

The biggest obstacle for Howie and Charlie winds up being the well-meaning interference of their closest friends: Noah is convinced that Howie needs to get laid rather than to fall in love –and his questioning of Howie’s desires grows so obnoxious that it threatens to capsize their longstanding friendship. Meanwhile Will remains concerned that Charlie, who’s rebounding from a recently-ended relationship, is moving too fast. Noah and Will’s interference with their friends’ budding romance blinds them to the fact that they themselves might be perfect for each other, and not only because they’re the aforementioned men who brought books with them on vacation.

Kim Booster, who also wrote the sharp and funny screenplay, fleshes out several Asian queer characters, juggling issues such as racial fetishism with the class conflicts that populated the novels of his source material’s era. Fire Island gets a hilarious running joke out of the “doorman” who greets Noah and his crew every time they visit the ritzy abode. “Can I help you?” he asks haughtily, as if he’s never seen them before. More than one snooty guest tries to guess the ethnicity of Howie and Noah, with one going so far down the fetishism scale that he is covered with anime tattoos.

Noah’s meddling in Howie’s budding relationship with Charlie (James Scully), the goofy doctor, ultimately threatens his closest friendship. Howie wants to take things slowly, but Noah keeps twisting his arm to get laid, primarily because Noah made a misguided agreement to abstain from sex until Howie gets some. You can feel Austen’s heroines throwing shade but also nodding with approval at all that meddling.

Doctor Charlie has a watchdog of sorts – a stern, rich lawyer named Will (Conrad Ricamora). He is like this film’s Mr. Darcy equivalent. Will thinks the on-the-rebound Charlie is naïve and prone to being taken advantage of, and sees the harmless Howie as a major threat. Of course, standard romcom wisdom dictates that Will and Noah will float from intense antagonism to swoony romance, complete with rain-soaked confessions and tentative gestures of affection. This plays out with the requisite obstacles like the return of Charlie’s racist ex-boyfriend, for whom he still carries a torch, and the financial status of Erin (Margaret Cho) who, now broke, will have to sell her house and end the gang’s yearly get-togethers.

Near the end of Fire Island,Noah asks Will a question you don’t hear too often in romcoms: “What do you want?” Will’s answer is a testament to how effectively this film wears its heart on its sleeve and hits home in a powerful way. This film is ultimately about memories and good times with the chosen families so many queer people created in lieu of the blood relatives who often deserted gay people when they decide to come out. But, in the vein of the logic of a Jane Austen novel, the film is also about characters we want to see get together – the only thing necessary for a romantic comedy to work. It’s to Andrew Ahn and Kim Booster’s credit that they don’t overcomplicate things as so many films of this genre have done.

While Fire Island was originally planned to be a Quibi series, it was reworked into a film after Quibi’s sudden shutdown. Fire Island recently had a special screening at UCLA in the James Bridges Theatre on May 3, but not released in theatres yet.  Fire Island has been made available to US audiences on Hulu beginning June 3, 2022.