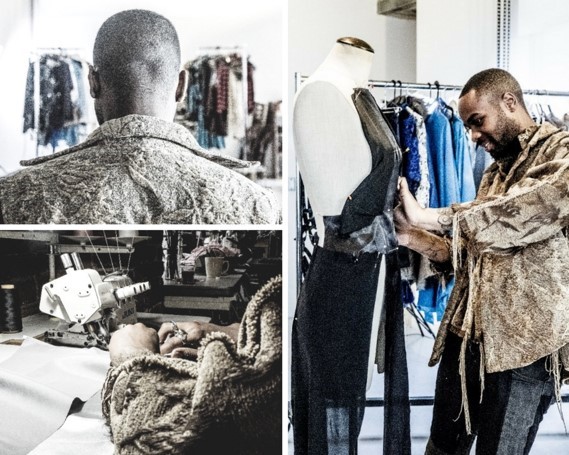 Los Angeles,CA, By Carley Schumann,(The Hollywood Times)04/01/2018 – This weekend, Style Fashion Week met up with celebrity designer, Andre Emery to discuss his upcoming collection debut at Style Fashion Week, Palm Springs. Style Fashion Week is a global producer of high-profile fashion, music and art events. It provides a turn key platform for established, emerging and international designers, artists and musicians to display their work in a professional environment, growing their business and generating revenue. See below for sneak-peaks of the collection and a full interview with Andre about his beginnings as a designer and insights on his career as he continues to build his empire.
As we made our way into Andre’s studio in DTLA, we were greeted by a group of designers wrapping up a shoot in the studio. The Bronx-born designer has transformed his home into a live-in studio, where artists, designers, and creatives can rent space to set up shop and crank out their work—making his home a space constantly buzzing with creative energy.
Throughout his time as a designer, Andre has dressed the likes of Lana Del Ray, Rhianna, Slick Woods, Chris Brown, Paris Hilton and other notable celebrities. Emery made his first runway debut during Style Fashion Week, Los Angeles in October of 2017. He then brought his designs to the Style Fashion Week stage during New York Fashion Week in February of 2018. He plans to introduce menswear to his collection in Palm Springs this April.

We began by asking the most obvious of first-questions: When did it all begin?
Andre Emery’s interest in fashion began in high school when he started customizing outfits by cutting graphics from scrap clothing and gluing them onto his own garments. “I never wanted to sew.” What started as a creative hobby gained recognition from his peers, but it wasn’t until a few years later that he thought to pursue fashion a bit further. On a whim, he sent in an online application to the Art Institute of California—when he was called within minutes he realized that it was time to take his design career to the next level and made the move to Los Angeles. Pursuing a career in design was an uncharted path for Andre, who grew up in a family of “nine-to-five” workers—while his family didn’t fully understand the magnitude of his career choice initially, they have remained supportive.
He described much of his career as serendipitous, the details falling into place seamlessly over time. In college, it was his intention to design menswear but came to find that the menswear courses had been cancelled for the semester. He took it as a sign and dove into womenswear. He immersed himself in an entirely new world, learning the “language” of fashion design—understanding the female form, the ways that garments drape and move and most importantly, how the woman wearing them feels. In school, he particularly enjoyed studying the history of fashion declaring, ”What people don’t realize, is that it’s all a cycle.”
His love of history is not limited to the history of fashion. Much of his collection inspiration is drawn from classic films—the production, the actors, the characters and the stories. We could see the passion in his eyes as he discussed his admiration of classic films and their ability to bring light to specific eras, ideas, and messages. It is his goal to do the same through his garment design. He is not simply designer, but a director.
Andre Emery designs for the women in power, the women who travel, the women with an undeniable sex appeal, but who carry it with an air of grace that cannot go unnoticed. He creates garments for the women with a story and with each stitch, he writes that story.