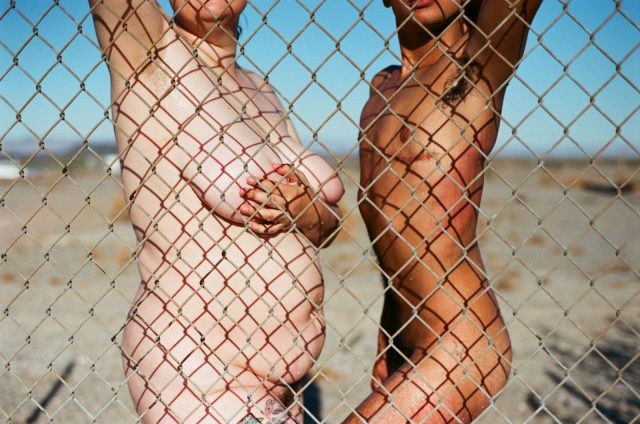 Exhibited at the Directors Guild of America in West Hollywood, the three part pop-up art presentation is a celebration of trans beauty, expressed through a single-channel video installation, a photo essay, and a sculpture series brought to life by Lio Mehiel, a transmasculine, Puerto Rican and Greek actor, filmmaker, and artist.

The centerpiece of the presentation are four stone sculptures of trans and gender non-conforming (TGNC) bodies, which will be featured atop plinths, cast by the talented, multidisciplinary artist Holly Silius. The models include Lio Mehiel (WeCrashed, Apple+), photographer and artist A. Klass, actor Sydney Mae Diaz (Generation, HBOmax), and Emmy nominated actress and creator Rain Valdez (Razor Tongue).

Evocative of the Met’s atrium of Greek and Roman busts, within a medium that traditionally depicts cisgender bodies, these four sculptures are the beginning of what Lio envisions as a robust collection of TGNC figures, inclusive of all body types and gender presentations. The busts affirm and revere TGNC bodies by rendering them as tangible, permanent, and set in stone amidst the American and global landscape where many are trying to eradicate the right of TGNC people to exist.

The complete work of Ancient Futures presented in three parts: Purgatory, Fruit Trees, and Angels explores the contradiction of the transgender experience as being both rooted in the body and transcending the body.

The piece is set in a desert ghost town, overflowing with disposed of and forgotten metals, plastics and debris. This setting, completely devoid of life, serves as a metaphoric parallel to the strategic attempt to erase and dispose of trans life and trans history through the hundreds of legislations that have been proposed in recent years.

Ancient Futures imagines that within the apocalyptic atmosphere of the present is an ancient map for the future. A future heralded by trans-angels; a future that centers the collective care and embodied creativity that has allowed TGNC communities to live, thrive and flourish throughout history.

This is the first iteration of Ancient Futures, which will be exhibited as a larger stand-alone art exhibition in Los Angeles later in the year.

Part one, Purgatory, is a 14-minute excerpt from the short film Suspension by visual artist and filmmaker, Dulcinee DeGuere. The video uses the Bible’s Adam and Eve myth as a jumping off point to explore the embodied implications of being cast out. The film is set in an abandoned motel off of Route 66 as a location emblematic of the fermenting mythos of America.

The fragmented story follows Wolfie — desperate, stuck in a looping delusion that he must “fix” the wounded body of his lover, Angel, as a way to repent for his sins. It’s only when he realizes that her wound is actually a shared wound that inflicts them both, can they finally be together.

Purgatory hints at the larger narrative that Suspension weaves – one in which a group of people struggle to survive and reproduce in a presumed nuclear apocalypse. Building off of Gilles Deleuze’s essay “Desert Islands,” Suspension takes Deleuze’s concept literally, by placing its characters in a deserted desert landscape framed as a land-locked island. It poses the questions – when the structures of society disappear, what is left in their wake? How do its inhabitants cope with not only their separation, but their awareness of their separation? The characters necessarily become “absolutely separate, absolute creators, in short, an idea of humanity, a prototype.”

Purgatory is a collaboration between writer, director, and editor, Dulcinee DeGuere and actors Lio Mehiel and Zachary Nicol. The trio explores how to engage queerness as a formal approach to filmmaking. The non-linear story mirrors the non-linear journey of uncovering one’s identity.

The piece is presented on an old television set with the video playing on loop.

Fruit Trees is the first chapter of a photo essay shot by photographer A. Klass with creative direction by Lio Mehiel.

Lio Mehiel chose a desert ghost town in the Mojave desert as the backdrop for the photo essay Fruit Trees in order to explore the contradictory mythology of the American West. The mythos of moving west to live a more “free” life — the story of the ultra-American cowboy and the gold rush; in severe contrast to the reality of the dilapidated architecture of forgotten towns amidst rotting plastic in an ecological environment that is not suitable for human life. This contradiction between mythos and reality serve as a metaphor for much the American experience, especially for queer, trans and non-white populations.

The photos include TGNC figures posed nude up against the crumbling architecture (of America). The figures emerge from the rubble like uncanny fruit trees, pulsing with life in an otherwise inhospitable landscape. The images celebrate not only the beauty of the fleshy TGNC body, but also the power of TGNC people to imagine beyond their material circumstances and thrive in the most unlikely places. Rather than imagining a distant utopia, Fruit Trees pictures the beauty and collective care that exist in the now despite the apocalyptic conditions of the present.

The photos feature TGNC friends of Lio Mehiel: Sydney Mae Diaz, A. Klass, Lio Mehiel, and Halo Rossetti. The full vision for the photo essay includes twelve TGNC models (as a reimagining of the twelve apostles) posed together in dynamic group shots inspired by religious imagery and evocative of the collective care present in queer community.

Angels is a series of sculptures made from body casts of TGNC people of all backgrounds, sizes, and gender presentations. The collection of busts, which creative director Lio Mehiel envisions as the start to a historic collection of TGNC figurative sculptures, disrupts the western-colonial archive of the human body. By (re)creating these sculptures as pieces of embodied memory, Angels hearkens to the history of TGNC peoples that has always existed, despite conservative attempts to categorize TGNC people as part of a contemporary, immoral fad. The series also calls forth a future in which TGNC bodies and experiences are protected within the archive of (art) history.

Lio Mehiel is committed to bringing a queer, radical perspective to the commissioning and selling of art objects. Rather than allowing the TGNC models who have offered their body to create the sculptures to go unremembered, the models will always be uplifted and credited in any display of the work alongside the sculptor and curators. Additionally, each TGNC model will receive a portion of the profits from the sale of the work alongside the artist. This is an effort to build wealth within the TGNC community and to provide an equitable alternative for artists and gallerists who use the bodies and/or images of marginalized communities to create and sell work.

Finally, a portion of the profits from the sale of all of the sculptures will go towards building an unrestricted cash grant to artist-activists who are currently advocating and creating on behalf of the TGNC community. Ancient Futures will be partnering with an established organization with ties to the community to initiate this grant program.

Angels is inspired by a collaboration between the multidisciplinary artist Holly Silius, photographer Kobe Wagstaff, and creative director Lio Mehiel entitled Phantom Feel which features a sculpture by Silius of Mehiel’s chest after their top surgery. Phantom Feel received widespread international acclaim by The Art Newspaper, art net, Al Jazeera, Variety, Dazed and more and it was also presented as a part of a major public art exhibition PATRIARCHY R.I.P by Pussy Riot’s Nadya Tolokonnikova.

Lio’s work spans film, television, multimedia installation, and theater. Lio began their career as a child actor on Broadway and can now be seen in shows like WeCrashed (Apple+) and Tales of the City (Netflix). They are starring in the lead role in the upcoming Sundance Labs supported feature film, Mutt, Executive Produced by award-winning filmmaker and transgender icon, Silas Howard.

As a filmmaker, they produced Chaperone, a queer short film which premiered at Sundance Film Festival in 2022 and won a special mention for Best U.S. Short at the Palm Springs International Shortfest. Lio wrote, directed, produced, and starred in Disforia, a short film which premiered at Outfest Film Festival in 2018. Lio is now adapting Disforia into a feature film.

As an installation artist, their immersive piece Arcade Amerikana was included in the list of 10 Best Immersive Shows in NYC by TimeOut and GOTHAMIST.

Lio attended Northwestern University, and is an alumni of the Emerge NYC residency program for artists-activists. They are a co-founder of Voyeur Productions with creative partners Russell Kahn (Scrap Paper Pictures, Amazon) and Dulcinee DeGuere.