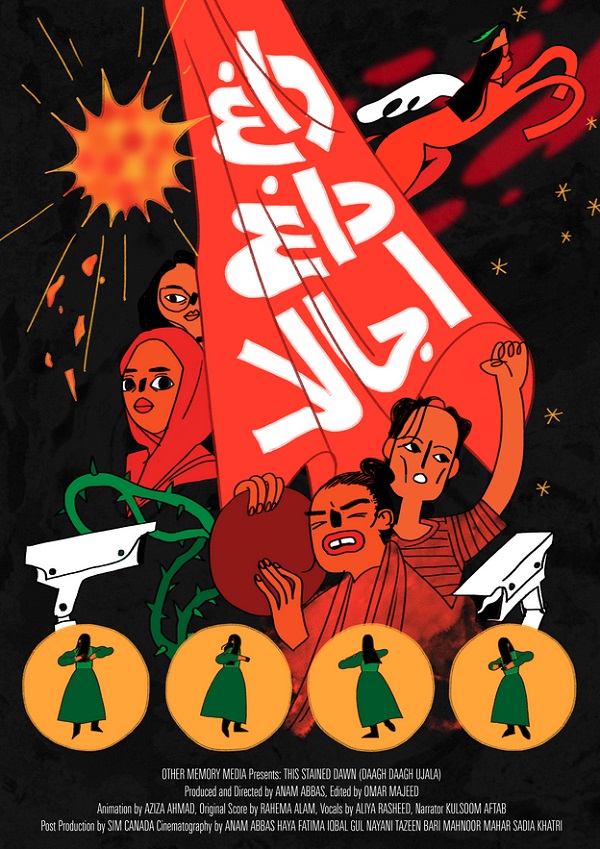 Thursday, May 5, was the opening night of the Asian Pacific Film Festival in Los Angeles, an annual film festival presented by Visual Communication (VC), established in 1983 as a vehicle to promote Asian Pacific American and Asian International cinema.

Along with a gala reception at the Directors Guild of America in the evening were several films and sets of short films by Asian American and Asian filmmakers including the interesting set entitled “Armed With a Camera.” There are a number of featured programs and one of the stand-outs is Anam Abbas’ documentary feature This Stained Dawn (Dagh Dagh Ujala, Pakistan, 2021), in which the director as a participant details the preparation for the multi-city Aurat March (Women’s March) in Pakistan in 2019 and 2020. This Stained Dawn tells the story of a feminist movement asserting itself in the country’s urban spaces through the eyes of the march’s organizers.

With the rise of violence against women, activists in multiple cities in Pakistan have united to fight against the conservative religious establishment for their right to organize Women’s marches. In an irrefutable style and point of view, Anam Abbas, the director and one of the organizers of the marches, shines a bright light on the dark alleys of what it means to be a woman in present day Karachi. Director Anam Abbas offered an informative visual Q&A after the screening at the film festival.

The state of women in the frequently intensely Islamic Pakistani society is a rather dire one, with the phenomena of rape, murder, and torture against women being a frequent phenomenon, particularly in backward areas. Despite the fact that women in the country were allowed to vote since 1956, and have held high offices including that of the Prime Minister, Speaker of the National Assembly, Leader of the Opposition, as well as federal ministers, judges and serving commissioned posts in the armed forces, in some areas, even going out of the house is perceived as a sin by local societies. At the same time, the judicial system in Pakistan is disrupted, the implementation of the law negligent, and the law enforcement underperforming, which adds to the violent incidents against women.

In such a setting, Karachi’s feminists organize a women’s march every year, named Aurat March (Women’s March) under the slogan “my body, my choice”, which has become a point of intense controversy between them and the conservative forces of Pakistan, which derive from rightist and ultra-religious groups. Just a few days before the multi-city march in 2019, 10,000 protesters gathered in Karachi. Anam Abbas records the preparation for the event, the various peripheral actions, and the event itself, all the while highlighting the struggles of the feminist movement against a system that seems to be against them on a number of levels. What is quite interesting is the inclusiveness of the Aurat March, as it incorporates the local issues of women in various communities and even includes trans women.

The majority of the documentary follows a number of the leaders of the movement, as they go door-to-door to encourage women to come to the rally, organize discussions about feminism or simply talking to the camera about their purpose, the difficulties they face and the place of women in Pakistani society. The director tries to include as many of them speaking as possible, an approach that definitely benefits the watchability of the film, as much as the various different footage, which include archive videos that trace the history of suppression of women, surveillance footage, and even animation.

A number of scenes stand particularly out. The members of the group riding in bikes and cars on the streets of Karachi to call for people to show up in the rally, the one where one of the key members speaks to a journalist about the goals of the movement, and the press conference where a man starts sprouting his misinformed, hateful questions about his perception of the nature of women under the guise of journalism, are all rather impactful sequences.

At the same time, Abbas also focuses on the frustrations and the struggles of political organizing, as the leaders of the group have to face uncountable issues in order to make the March happen, from errors of the people working for the march, to the police trying to get the names of the leaders of the movement, to another march that happens at the same time as theirs with the exact opposite purpose, and the inevitable violence that ensues. In that fashion, the documentary is as much about the march and the feminist movement as for political organizing, in an approach that makes the title even more appealing.

Omar Majeed’s editing is excellent in the way it combines the different kinds of footage, while the many scenes that also feature utterly fitting music by Rahema Alam with what is being depicted on screen add even more to the entertainment the film offers, by lightening the overall heavy atmosphere of its context. Well-shot and exciting to watch, This Stained Dawn follows a fairly standard template for political action films of this sort. But it communicates its main theme effectively and should be an empowering film for women’s struggles in many parts of the world.