Las Vegas, NV (The Hollywood Times) 9/21/21 – When The Hollywood Times caught up with Anabel Englund at Life is Beautiful, the fresh-faced multi-talent was surprisingly laid back. In the midst of a festival blooming with new enthusiasm, she held her own.

That may be because she knows how to keep herself grounded, losing herself in a meditative state in harmony with her music.

In the second half of our expansive interview, she told The Hollywood Times that she draws inspiration for her music from often everyday topics. She can’t help but put a fresh, musical spin on them. It’s something that draws her nearly 100k Instagram followers to her.

“I draw inspiration most of the time through relationships,” Englund told THT.  “Or even just if I’m watching a show or a movie and I see a relationship that reminds me of something…it might stick with me and then I’ll end up writing a song about a relationship in a tv show or something like that. So I get inspired

We touched on the obscure of her personality with her, asking for something we wouldn’t possibly know about her.

“I love sesame oil,” she quipped. “And one of my fears is that I’ll eat too much sesame oil and I’ll become allergic.”

Certainly not. Her devoted fan base wouldn’t allow it. They’ll need to see her at the next performance, thank you.

That next performance is coming up quickly. She’ll be performing at Bang Bang in San Diego on September 25th, followed by an appearance at Monarch in San Francisco on October 2nd. Beyond that, she’ll be in North Carolina on October 15th. 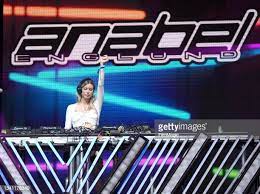 Anabel says fans who want to keep up with her should follow her Instagram, where the musical beauty is most active.

“I’m posting a lot about what I’m doing on there,” she told us.  “I have a lot of shows and I just put out a song called “Midnight Rapture” that’s like an ode to ‘Blondie’s Rapture.’ I think you’d really like it.”

She was right. We did. And we look forward to more.