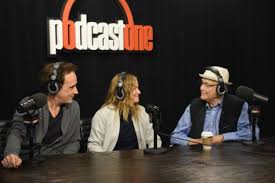 LOS ANGELES (May 1, 2017) – PodcastOne, the nation’s largest advertiser-supported podcast network, debuts All of the Above with Norman Lear today, featuring Emmy Award-winner Amy Poehler as the guest. The pair, who had just celebrated the Passover holiday together at Poehler’s home, discussed religious history and its effect on human kind, Amy’s recent pilot with Carol Burnett and how Burnett inspired her high school musical performance in Once Upon a Mattress, and the differing points of views across generations. Lear’s co-host and actor Paul Hipp led them all in a couple of songs, a concept that grew from Norman and Paul’s weekly late-night music sessions with a group of gentlemen in Lear’s backyard. The episode is available now on PodcastOne.com, the PodcastOne app and Apple Podcasts.

In the episode, discussion about Trump led to a rendition of These Are the Days, sung by Poehler in the voice of All in the Family’s Edith Bunker, a story about Amy’s son demonstrated societal progress in open mindedness and acceptance, which led to an interesting drawing by Norman, and conversation about technology included the changes in expectation of privacy. Below are a few excerpts from the conversation:

On Trump and “Those Days”:

Poehler: “I was just reading that SNL is having its biggest ratings in twenty years.”

Lear: “It has something to do with the current presidency and Alec Baldwin.”

Hipp: “You were great as Hillary Clinton, can I just say that?”

Poehler: “Those were fun times. Remember those days?”

Lear [singing]: “Those were the days.”

On the Open Mindedness of Children:

Poehler: “And then children make a big deal – difference too. And there’s a lot of questions about, just, fairness and equality. They ask really interesting questions that aren’t loaded or have no agenda behind them, and I had a funny story where I was listening to my son’s friend, who’s eight, tell him he is the son of two moms. He was saying – my son’s name is Archie – and Archie was saying, ‘Where’s your dad?’ and the boy was saying, ‘I don’t have a dad. Well, I mean I have a dad but just a guy who gave me sperm.’ And then Archie turns to me and goes, ‘What’s sperm?’ and I was like, ‘Hmm, what’s the answer here?’ And I said, ‘Well, you know, men have parts to make babies and women have parts to make babies, and that’s a man part.’ And he’s like, ‘Oh.’ And then the boy just explained, ‘Yeah, you know, my mom got sperm and so then they made me, so I don’t really have a dad.’ And Archie was like, ‘Okay.’ They’re explaining really complicated things, which…”

Poehler: “You don’t understand Paul?…But I don’t know. There’s just none of the garbage attached to all of it.”

Lear: “It’s all pure. But Paul, do you seriously not understand where babies come from? I’ve taken the opportunity to draw it for you.”

Poehler: “People under the age of twenty-five have completely different expectations of privacy than I do. They’ve given over their privacy very voluntarily, and they never expected it in the first place. So everything is so public that there’s not that feeling of, ‘What have we lost?’ because they never had it.”

Lear: “Describe what you mean by privacy when you use the word in that context.”

Poehler: “…Just the simple fact that, we used to have parties that you took photographs in, and had to go and be developed, and you got them weeks after. Now, every single situation can immediately be shared and published.”

Lear: “By the time the party is over, depending on the size of the party, a number of people have already, you know, sent pictures of what they were experiencing.”

Poehler: “There’s a sense now that everybody’s thoughts, feelings and opinions, you know, must be broadcast. And then, a lot of these kids are, you know – some of them are like post-9/11 babies, so they’re all about security checks and code orange. They’re just really, really used to, you know, stop and frisk kind of behavior.”

View the video teaser or listen to the above clips here: http://bit.ly/2oQEMoL

Soon to be 95, Norman Lear has lived a life of many talents. He had a front-row seat to the birth of television: writing, producing, creating or developing more than a hundred shows. He had nine on the air at the same time and continues to executive produce as founder of ACT III Productions. Lear went beyond the screen and founded the 300,000-member liberal advocacy group People for the American Way and was presented with the National Medal of the Arts by President Clinton. Norman also purchased an original copy of the Declaration of Independence and toured it for ten years in all fifty states. Norman can be found on Facebook and Twitter @TheNormanLear.