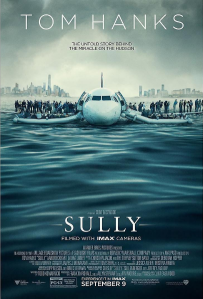 As the leading airline for the entertainment industry, American Airlines has donated a significant amount of time, resources, and materials to preserve the authenticity and integrity of the film. Since production started in September 2015, American has secured materials, set up locations, and advised on technical and company matters, facilitating access to American’s Flight Training Center at Charlotte Douglas International Airport (CLT), gates at LaGuardia Airport, Airbus A320 aircraft, and crew members who were involved in the NTSB hearings on Flight 1549—all integral parts of the story.

Under the direction of Oscar winner Clint Eastwood, Sully tells the untold story behind “The Miracle on the Hudson” where the actions of Captain Sully, First Officer Skiles, and Flight Attendants Sheila Dail, Donna Dent, and Doreen Welshsaved the lives of all 155 passengers and crew on board the flight. The film stars Oscar winner Tom Hanks as Sully, Aaron Eckhart as Skiles, and Laura Linney as Sully’s wife, Lorrie Sullenberger.

American Airlines said, “We’re honored to be working with Warner Bros. Pictures on ‘Sully.’ The producers asked for our help in telling this story that is an important part of the fabric of our airline. We gladly accepted their request and have been working closely with them since last summer to secure materials, set up locations and advise on technical and company matters. We are confident that audience everywhere will be inspired and moved by this compelling story and that our employees will be proud of the way it represents the aviation profession and our company.”

Sully is the latest film partnership between American Airlines—the #1 airline for the entertainment industry—and film studios. American has supported the films Three Guys Named Mike (1951), Up in the Air (2009), and Disney’s Planes(2013) with free advertising, props, and branded terminal space, in addition to catering to entertainment insiders with industry-specific services. Per the recommendation of the American Airlines Council on Entertainment, a panel of nearly 30 advisors from the entertainment industry including travel bookers for film and television studios as well as celebrity managers, the airline introduced 24-hour service desk and private reservation numbers for high-profile customers that only select American workers can access in order to help maintain the privacy of A-listers. Additionally, American has added healthier options including salad to in-flight menus, and as direct result of requests from L.A.’s entertainment industry traveling to the Toronto International Film Festival this fall, American is adding new non-stop flights between Los Angeles and Toronto from September 7-14, 2016.

On Tuesday, September 6, American Airlines will host a series of free advance screenings for airline employees in New York, Charlotte, Dallas-Fort Worth, and Los Angeles, to show support for the airline and those involved in the events that took place on January 15, 2009.

Celebrating its landmark 90th anniversary this year, the world’s largest airline has dedicated over 3 billion dollars to revolutionize the travel experience of more than 6,700 flights per day to nearly 350 destinations in more than 50 countries. As the leading airline with the most daily flights at Los Angeles International Airport (LAX)—the 7th busiest airport in the world—American is the only airline serving 5 continents non-stop from LAX. In 2016, American expanded its global footprint offering more destinations than ever before, including new international and national routes from LAX to Haneda/Tokyo (February 11, 2016), Auckland (June 23, 2016), and Southeast Asia’s leading capitals of Hong Kong (September 7, 2016) and Beijing (December 2016 – tbc), among others. These destinations include convenient connections to the world’s top financial centers, including New York and London, in addition to other top markets throughout the U.S., Mexico, the Caribbean, Central and South America.

Join us for an evening celebrating Anthony Bourdain