Beverly Hills, CA (The Hollywood Times) 8/5/19- Returning for a chilling second season on AMC, The Terror is back with  Infamy; an account of the terrible fate a Japanese American family faces in internment camps during WWII, with a supernatural twist. Co-creator Alexander Woo, along with actors Derek Mio, George Takei, join costume designer JR Hawbaker and cinematographer John Conroy on stage at the 2019 TCA Summer Press tour to discuss the latest horror installment.

Much like the novel-based first season, Infamy distinctively takes on the roll of bridging the gap between fact and fiction by utilizing japanese horror (or ‘J-hor’), simultaneously paying close attention to historical details, while also creating a parallel for status quo America. Actor George Takei speaks to using horror as a vehicle to illustrate these parallels. Takei expresses, “What we have is this endless cycle, the repetition of this kind of horror, injustice being inflicted on minority people. And we see it again today on our southern borders. But we’ve reached a new, grotesque low. We were together with our parents. Our families were intact. What we see today now is this incredible inhumanity of children being torn away from their parents and some being scattered in the outer far reaches of the United States from where they were torn away. […] And so, I hope this show, “The Terror Infamy” will remind people that it is still existing today. It is our hope that enough people, enough Americans seeing this will try to keep this sort of thing from recurring in the future of this country to make it better, truer democracy.”

What makes this specific show this season that much more authentic are the real life experiences shared by the cast and crew. George Takei was an unfortunate victim of being imprisoned with his family during this regrettable time in American history. Takei recalls, “As a five-year-old survivor of that horrific experience, I was five years old when I was imprisoned and eight-and-a-half when I came out, and the thing that impressed me most profoundly was, as this discussion attests, the details. When I saw the replica of the internment camp there built in Vancouver, British Columbia, I immediately recognized it, but I recognized it from the standpoint of a five-year-old kid. […] I remembered it so well. The mess hall, the look and feel of it, the cacophony, the noise, and the crowding at the feeding trough. The look of everything was so authentic. It really took me back to my childhood.”

While it seems that The Terror cast and crew have a ton of responsibilities on their shoulders to depict this sensitive topic of internment camps in the truest light, the show runners and actors do an impressive job with research and in making sure the viewer is so engulfed in detail; so much so that the act of watching is a very real and tangible experience.  JR Hawbaker continues, “We wanted to, one, establish the historical visuals and make you feel viscerally like you were in that period and you could relate, and we also wanted to just really do justice to the historical details and say we see you. We see this community. We see you as a culture. We see that the story has not been told enough, and the details were incredibly important. We spent — I know I spent a really long time, actually, here in Los Angeles before I went to Vancouver sitting and speaking to as many people who were still alive and remembered their stories. I sat in their homes. I looked at the family books. […] 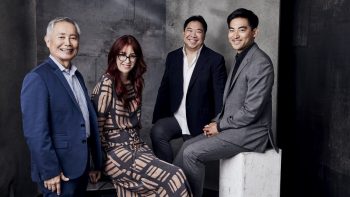