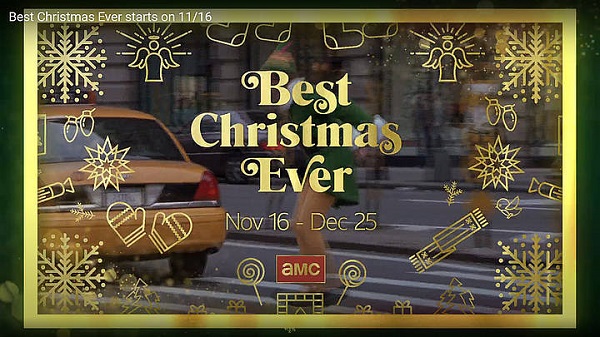 From Vince Vaughn and Starring Brittany Snow and Justin Long

NEW YORK – November 21, 2022 – AMC and AMC+ will again celebrate the holiday season with the return of “Best Christmas Ever,” a month-long celebration featuring over 62 titles and more than 622 hours of holiday season programming beginning November 27 and running through December 25. AMC kicks off “Best Christmas Ever” with Love Actually and Christmas at the Kranks and will be the exclusive broadcast cable home in December for some of today’s most cherished holiday favorites, including Elf, National Lampoon’s Christmas Vacation, Four Christmases, The Polar Express, and Fred Claus. Additionally, fans of the Yuletide season can enjoy classics and fan-favorite films like Miracle on 34th Street, White Christmas, Rankin/Bass titles, Planes Trains & Automobiles, and much more.

As previously announced, AMC+ will serve as the exclusive streaming home to the original film Christmas with the Campbells, which premieres in theaters and streaming on Friday, December 2. A new spin on the traditional holiday rom-com from Vince Vaughn (Fred Claus), Peter Billingsley (A Christmas Story), and Dan Lagana (American Vandal), the film stars Brittany Snow (Pitch Perfect), Justin Long (He’s Not That Into You), Alex Moffat (Saturday Night Live), Joanna Garcia Swisher (Sweet Magnolias), Julia Duffy (Newhart, Designing Women), and George Wendt (Cheers).  In Christmas with the Campbells, when Jesse (Snow) gets dumped right before the holidays by her boyfriend Shawn (Moffat), his parents (Duffy and Wendt) convince her to still spend Christmas with them, and Shawn’s handsome cousin (Long), while Shawn is away.

“Santa We Know Him!” on December 11 featuring Elf, The Polar Express, The Year Without Santa Claus, Miracle on 34th Street, and Fred Klaus.

“What the Elf?!” On December 17 featuring AMC exclusive titles Elf, Fred Claus, and The Polar Express.

For the full “Best Christmas Ever” lineup on AMC and AMC+, please click HERE

AMC is home to some of the most popular and acclaimed programs on television. AMC was the first basic cable network to ever win the Emmy® Award for Outstanding Drama Series with Mad Men in 2008, which then went on to win the coveted award four years in a row, before Breaking Bad won it in 2013 and 2014. The network’s series The Walking Dead is the highest-rated series in cable history. AMC’s current original drama series are Better Call Saul, Fear the Walking Dead, Kevin Can F*** Himself, The Walking Dead, The Walking Dead: World Beyond and the forthcoming series 61st Street, Anne Rice’s Interview with the Vampire, Anne Rice’s Mayfair Witches, Dark Winds, Moonhaven, Pantheon, Ragdoll and Tales of the Walking Dead, among others. AMC also explores authentic worlds and discussion with original shows like Talking Dead, AMC Visionaries and Ride with Norman Reedus. AMC is owned and operated by AMC Networks Inc. and its sister networks include IFC, SundanceTV, BBC America and WE tv. AMC is available across all platforms, including on-air, online, on demand and mobile.

AMC+ is the company’s new premium streaming bundle featuring an extensive lineup of popular and critically acclaimed original programming from AMC, BBC America, IFC, and SundanceTV and full access to targeted streaming services Shudder, Sundance Now and IFC Films Unlimited, which feature content such as A Discovery of Witches, Creepshow, and Boyhood. The service features a continually refreshed library of commercial-free content, including iconic series from the AMC Networks portfolio including Mad Men, Halt & Catch Fire, Hell on Wheels, Turn: Washington’s Spies, Rectify, Portlandia, and series from The Walking Dead Universe, among many others. The service also offers a growing slate of original and exclusive series including Gangs of London, Kin, The North Water, That Dirty Black Bag, This is Going to Hurt, Moonhaven and the first two series in a new Anne Rice universe, Anne Rice’s Interview with the Vampire and Anne Rice’s Mayfair Witches. With new movies released every Friday, AMC+ is the newest destination for exclusive film premieres direct from theaters all year long. AMC+ recently launched in Canada, Australia, New Zealand, India, and Spain and is available in the U.S. through AMCPlus.com, the AMC+ app, and a number of digital and cable partners.