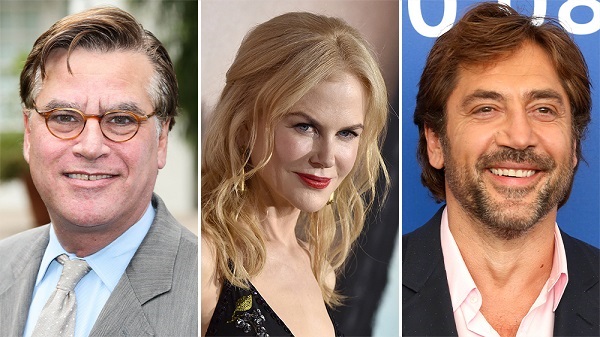 Hollywood, CA – March 29, 2021 – Amazon Studios started principal photography on writer-director Aaron Sorkin’s drama Being the Ricardos this week in Los Angeles.  Nicole Kidman and Javier Bardem star as real-life couple Lucille Ball and Desi Arnaz, the stars behind the groundbreaking and classic 1950s television sitcom I Love Lucy, that focused on a happily married though seemingly mismatched couple – a flame-haired, accident-prone American housewife, and her sensible Cuban-American bandleader husband – that became the top-rated and most beloved show of the era.

“Being the Ricardos is a drama about the people behind the making of television’s most famous comedy. I’m looking forward to working with Nicole, Javier, J.K., Nina and the rest of our great cast,” says writer-director Aaron Sorkin.

Academy Award winner Nicole Kidman (The Undoing) is the eponymous redheaded star of I Love Lucy, Lucille Ball, and fellow Oscar winner Javier Bardem (Before Night Falls, No Country for Old Men) is her husband, Desi Arnaz, the Cuban-American actor, musician, and president of their television production company, Desilu Productions.  On I Love Lucy, Ball and Arnaz portrayed America’s most famous TV couple, Lucy and Ricky Ricardo. But in real life their relationship was infamously more complex and tumultuous than the hilarious fictional characters they portray.

Executive producer Lucie Arnaz says, “My brother Desi and I signed on because this is a story of our folk’s real-life passionate, tempestuous and complicated relationship and not a recreation of I Love Lucy – no one could do that.   We felt exploring that relationship could be an enlightening challenge.  We asked Amazon for the best and we got it with every hire.  Aaron Sorkin has not told this tale as a ‘cradle to grave’ biopic.  Instead, he’s chosen to illuminate a snippet of time during an incredibly intense period of their show’s enduring success.  The casting choices have all been inspired and Desi and I are so looking forward to seeing what this impressive group of actors make of Sorkin’s delicious script.”