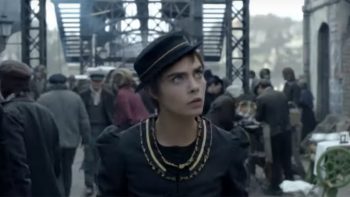 The series takes place in a Victorian fantasy world filled with mythical creatures whose homelands were occupied by humans. The creatures and humans seem to remain constantly at war with little to no chance at establishing harmony. The creatures—called Fae—are forbidden to live, love, or fly with freedom. Hope lives in the form of a human detective, Rycroft Philostrate (Bloom) and a refugee faerie named Vignette Stonemoss (Delevingne) who rekindle a dangerous affair despite an increasingly intolerant society. Vignette protects a dangerous secret that endangers the world of Philostrate and his fellow human peers.

The first episode of the series entitled Some Dark God Wakes fights to find a rhythm and is relatively hard to follow. The series has potential but also feels strangely familiar as if we’ve seen it done before. There are, however, moments when Bloom manages to reel the viewer in with his usual sultry and stern delivery.

Each star seems to be wrapped up in some sort of affair or betrayals so it should come as no surprised that “Carnival Row” is filled with adult themes. As a warning, viewers deterred by violence and sex should proceed with caution. 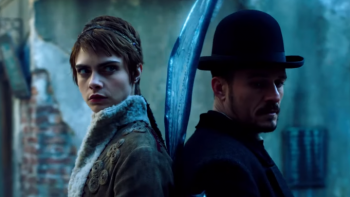 The first season of “Carnival Row” will include eight episodes and is now available to stream on Amazon Prime Video.