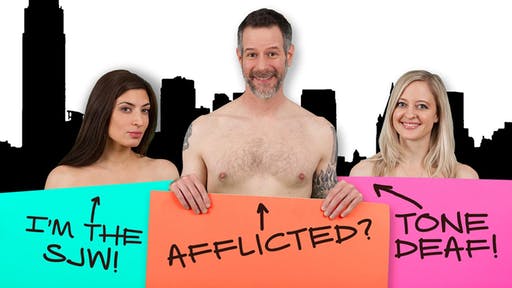 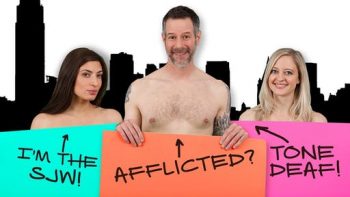 Los Angeles, CA (The Hollywood Times) 6/4/18 –  All-American Sex Addict/Woke AF is about neither sex nor sex addiction. It is about America, though, pitting three politically correct women against one tone-deaf man. What playwright/director Matt Morillo sets out to do is, in his words, “poke a little fun at us Hollywood liberals and how some of our rhetoric may be hurting our causes and our allies.”

That being said, there is some sex here: Full-frontal nudity, both male and female. (And since equity waiver theaters are very small, the nudity is very… close.) But essentially, this is a comedy. If you don’t guess that from the musical introduction of “Yakety Sax,” you will the moment the protagonist reaches for his go-to seduction tool, gluten-free vegan burritos.

The conceit is this: Ex-cop, Jack, a recovering sex addict shot on duty and retired a hero, has written a script about sex addict cop shot on duty and retired a hero. Now he wants his African-American neighbor and all his women friends to give him notes on the script, assuring him that he has not “othered” anyone, or stereotyped anyone, or offended anyone in the slightest way. If you’ve ever gotten notes on a script – and this is Hollywood, so odds are that you have – you know how maddening the process can be. On top of that, Jack (Tom Pilutik) wants to ask his sex-positive girlfriend Ashley (Cynthia Aldrich) to commit to a monogamous relationship, and her opinion of his entitlement issues could get in the way. So could the unexpected appearance of ex-fling Riley (Jenni Halina).

It’s a lot of moving pieces for a 55-minute play, and director Morillo makes sure writer Morillo’s dialog keeps pace. Veteran Pilutik, especially, milks the laughs from his cluelessness, and both he and Halina deserve kudos for refusing to be body shamed (to piggyback on PC tropes) in the most concrete way.

The staging may be simple – a couch, basically — but the character interactions have complexity. A scene between rival women even passes the Bechtel test. It’s an auspicious work from a young playwright and an upbeat addition to the Hollywood Fringe Festival. 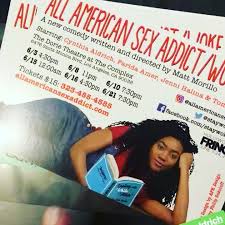 The Hollywood Fringe Festival features 282 performances of 59 separate shows in four theaters on Santa Monica Boulevard in Hollywood. It runs June 7 through June 24. All-American Sex Addict/Woke AF will be presented on June 8, 10, 15, 16 and 21.

For more information on The Hollywood Fringe Festival, go to www.hollywoodfringe.com

Written and directed by Matt Morillo