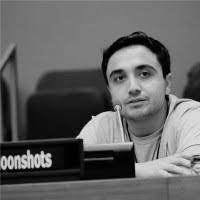 Mr. Aksu is the founder of FilmCapital.io, a community focused Hollywood crowdfunding platform that was incubated at Singularity University, and Auteur Academy, an educational platform to empower independent filmmakers.

Aksu is the Southern California Young Professionals Ambassador at the United Nations Association of America.  He is currently an MBA candidate at Chicago Booth School of Business.  He holds a B.A. in economics, with a minor in film, TV, and digital media from UCLA, and earned executive-level degrees from MIT, Wharton, and Singularity University.

We hope you enjoy the following exclusive interview with Mr. Aksu!

Advertisement
1) Please tell me more about your family origins and early years.
My family is originally Circassian.  During the Circassian Genocide, my great-grandparents escaped to Turkey, which then was a part of the Ottoman Empire.  They picked a city and moved in.
Our family is an entrepreneurial family that operates its own businesses.  It’s perceived as a part of our culture.
2)  In what part of the world would you most like to work for a film project and why?
Antarctica!  I am currently developing a documentary to be shot in Antarctica.  I can’t disclose much about this project yet, but Antarctica is an exciting place to visit for sure.
3)  What does your Auteur Academy offer for $197 or $497 in just just a few days that traditional film schools cannot in a few years?
We show people the business side of filmmaking through a unique educational lens featuring some of the greatest names in Hollywood.  How can you actually deliver a profitable final cut?
I personally went to film school and enjoyed every single class, but I learned all I know about the film business in my sophomore year as I shot my first feature film, which was picked up by Universal.  I wanted to share that experience with everyone.
The industry needs consolidated structures for independent filmmakers, very similar to Silicon Valley.  As a part of the Auteur Academy community, you go through a unique journey of learning and self-growth.
Auteur Academy