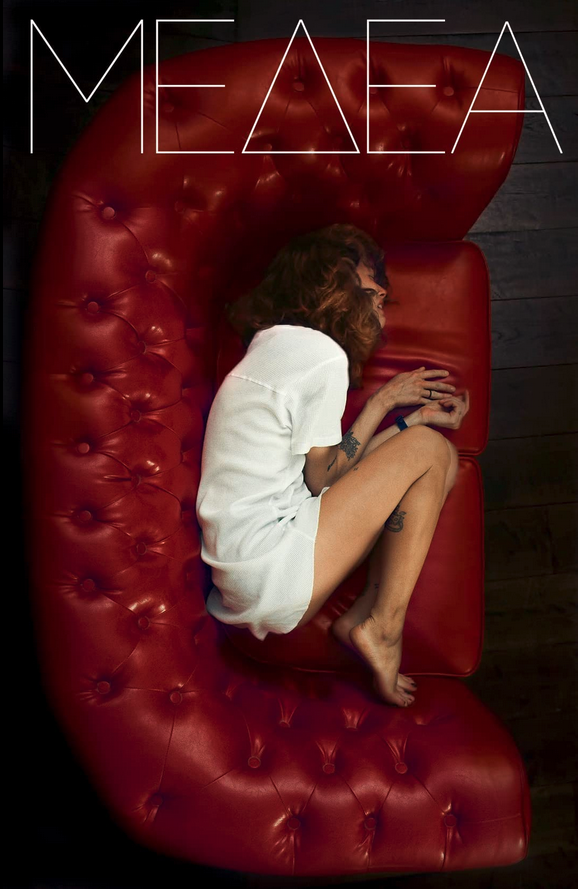 Los Angeles, CA (The Hollywood Times) 3/22/22 – One of the more daring films at the Locarno in L.A. Film Festival last weekend was Alexander Zeldovich’s Medea (Russia, 2021), a dynamic mix of ancient myth and modern existentialism. Set mostly in present-day Israel, this update of the eponymous Greek tragedy stars Tinatin Dalakishvili as Medea, an emotionally tormented Russian chemist who kills her corrupt cop brother and relocates to Jerusalem to be with her married Russian Jewish millionaire lover Alexei (Evgeniy Tsyganov). When their relationship splinters, Medea seeks solace in anonymous sex and her traditional Russian Orthodox religion, competing impulses that is unable to reconcile as the sex becomes more violent and her religious beliefs grow more devout. Medea, Russian director Alexander Zeldovich’s first feature in 10 years (and only fourth in three decades), was one of the best films at this year’s Locarno in L.A. Film Festival, a curated selection of films from the Locarno 2021 Film Festival and hosted at Acropolis Cinema with MUBI as the 2020 Arts & Archive Cultural Center on Beverly Boulevard in Los Angeles.

Employing striking and symmetrical widescreen compositions, Zeldovich charts Medea’s descent through a series of erotic encounters framed in fixed tableaux – establishing a slippery power dynamic between both the character and her suitors and the director and his actress. The film doesn’t interrogate this dialectic so much as exploit it in the name of sadomasochistic drama, body horror, and a certain unhinged fury, which at times recalls the energy and visceral impact of Andrzej Żuławski’s Possession (1981). Matching genre flourishes with a severe sense of intimacy and psychology, Medea is the kind of provocative, auteur-driven work that the Locarno Film Festival built its name on in terms of edgy, provocative cinema.

The Greek myth of Medea ends in tragedy, and this bold, bullish adaptation from Alexander Zeldovich positions itself firmly within the tragic genre. The narrative appears overly determined, the plotting is arbitrary and characters are revealed by their fatal flaws. These qualities, after all, constitute the mythic approach to storytelling (Yorgos Lanthimos deployed something similar in The Killing of a Sacred Deer). Such dramaturgical self-seriousness produces in this case a work of certainty and conviction, which will likely put off as many as it will enthrall. And the tenacious depiction of sexual gratification, for one, might lead some to wonder whether the director has confused horniness for profundity.

Medea, a young woman who lives in the Ural Mountains far from Moscow, has had a longtime lover, Alexei, with whom she has mothered their two children. At Christmas time, Medea receives an abrupt notice from Alexei that he is divorcing his wife and wants to be with her and move to Israel. Interestingly, the film begins with her trek to the confessional of a Russian Orthodox Church to atone for her sins that she recently committed – but it seems that there is no priest listening in the confessional at all. Soon we discover her larger sins. Medea, a fierce, but vulnerable, displays her naivety when confronted with the many encounters, in particular with men. Living in an isolated place far from Moscow with only occasional visits from her lover Alexei, Medea suddenly discovers the larger world which is often cruel. Her unquestioned love for Alexei can hopefully be reciprocal or else she will edge into madness.

There are contemporaneous similarities here, with Medea (Tinatin Dalakishvili) narrating her own story as a sort of expiation to an absent confessor (suggesting there’s no god, or at least not one interested in bearing witness to her perspective). She has a degree in Chemical Technologies, but has allowed herself to become the concubine of the powerful Alexey (Evgeniy Tsyganov). After finally deciding to leave his wife, the puritanical Nadya, Alexey decides to embrace his Jewish heritage and relocate with Medea to Israel, the promised land (the greener pasture which will allow them to escape the corrupting forces of Mother Russia, ‘the last winter’ of their lives). But certain underhanded dealings with Medea’s brother, FSB Officer Valery, threaten their promising future. When Valery threatens to extort Alexey, his sister murders him, thinking nothing of her actions until his corpse is later discovered, necessitating she confide in her husband. Unfortunately, Alexey is dismayed, and their increasing emotional estrangement causes him to leave her.

Zeldovich leans into the mythological roots of the narrative with a pronounced zeal for Medea’s undefined mysticism, perhaps enhanced by the striking presence and performance of Georgian actress Tinatin Dalakishvili (a favorite of Anna Melikyan, having appeared in 2014’s Star and last year’s Fairy). With blonde brow and brunette locks, her arresting visage is the gateway to a plunge into the abyss, experimenting with the strange bedfellows of sexuality and religion, both escapist crutches she’s unable to wholly commit to. Curiously, she falls into hypnotic trances during orgasm, a signal which defines her increasingly aggressive trysts, and is eventually absent in her final moment of lovemaking with Alexey, their emotional reality obfuscating her ability to experience physical pleasure.

Early on, discussions of happiness are referenced from a previous Soviet film (potentially Aleksandr Medvedkin’s 1935 silent film Happiness), but eventually, it’s revealed neither of them really understands the other. Their folly is further symbolized via a gifted wristwatch to Medea, which encapsulates trinkets shaped as the sun, moon and stars. Eventually, the clock stops working, signaling the end of Alexey’s love, leading her to have it programmed to turn counter clockwise in a defiant reversal to a better time (unfortunately they’ve gone beyond the pale of the sentiments in something like Cher’s “If I Could Turn Back Time”).

Medea’s descent eventually becomes more visually lavish, with some magical realism indicating she’s indeed lost her head, and cryptic references to Judaism tenets regarding women’s hair. “Do you know what will be next?” someone asks her, a nod to her ability to predict certain moments before they happen. Of course, she does, and we’re also a part of her preternatural realm regarding the denouement, set drastically amongst a tourist spectacle overlooking ruins (like the arid version of a famous sequence in the vibrant Marilyn Monroe noir Niagara, 1953), where her shrieking remonstrance manages to haunt even though we’re fully aware from the first frame where this tale will lead.

It turns out that Medea (Tinatin Dalakishvili) has committed an act of violence that she considers to be an act of sacrifice. When her husband, Alexei (Evgeniy Tsyganov), learns of it after they have moved to Israel, he is horrified, disgusted and ashamed. His withdrawal from his wife lights the match that engulfs their existence. He drifts away, trying to shield his children from the sins of their mother, who spirals into an epic odyssey of sex, revenge, and eventual penitence. Her pristine beauty, as embodied by Dalakishvili, is one of sharp, diaphanous angles, a spear hurled through the chaos of experience, born of an ancient trauma reemerging in the present. Having started on the path to destruction, it’s now impossible for her to stop.

Zeldovich’s scene-making, in turn, tends to isolate and emphasize the world of the protagonist Medea: Very little natural life exists outside of her immediate presence and activity. This fact is strikingly inverted in the final image, an innocuous street panorama populated with people rather than archetypes, shot from an eerie fixed perspective (akin to Michael Haneke’s Hidden). It provokes more questions than it resolves, reinterpreting the preceding tale of loss and betrayal. Her life in Israel is equally isolated – living in a large modernist house in a gated community with no friends. Once she confesses to Alexei what she did in the past for their love, he abandons her and she is left to wander aimlessly around Israel, picking up men for sexual escapades and also seeking a possible life in a Russian Orthodox convent at the Church of Mary Magdalene in the Kidron Valley of Jerusalem.

To varying effect, religious, cultural and national conflicts simmer underneath Medea’s sexual conquests. Her husband Alexei (as the Jason of legend) is the point of erotic origin, a Russian Jewish man made wealthy by the construction industry. Through Alexei’s occupation, the director probes historical concerns, dipping a finger in the Israel-Palestine divide. By developing new forms of concrete, the screenplay insinuates, the character aids the building of settlements and partitions in Jerusalem. The character even notes his discomfort about working with a German company that assisted in the chemical production of Zyklon B, which was used to murder Jews in Auschwitz. These loose allusions attempt to illustrate the central thesis: that the horrors of history continue to erupt; time cannot be reversed; and what has been lost – happiness, innocence, youth – does not come back.

Zeldovich’s Medea is a visual odyssey of continually diminished landscapes, leading to a fiery zenith on a rooftop representing the final straw between estranged husband Alexei and wife Medea in a crazy blonde wig. Her crumbling romance is matched by the disintegrating facades and infrastructures, to a fitting temple whereby a modernized tale retreats to its age-old, universal fount of fury. In closing out Medea, the ending is staged on the barren desert cliffs of Masada, Herod’s fortress palace in the desert. Here Alexei receives a cellphone call from Medea who tells him to look through the coin-operated telescope of the Lower Palace across the desert valley to the opposite cliff face. There she is, having drugged her children and ready to sacrifice them much like the Medea of Greek mythology did. Alexei runs out of coins and fails to see what happens to the children.

This film is heavily carried by a dynamic performance of Medea, played by Tinatin Dalakishvili. As she is nearly in every scene, and clearly stands tightly on the thin line of nuance approaches, her role is a culmination of both the heroine and the villain. In one scene, being playful and loving towards Alexei or others, can flip the switch and act completely insane due to either resentment or lack of confidence. Her idiosyncratic tendency has to be one of the best parts of Dalakishvili’s performance. The viewer never knows how she will act, but her chameleon-like figure always keeps you guessing what she will do next, as she seems to have no moral compass but is driven by a desperate need for independence.