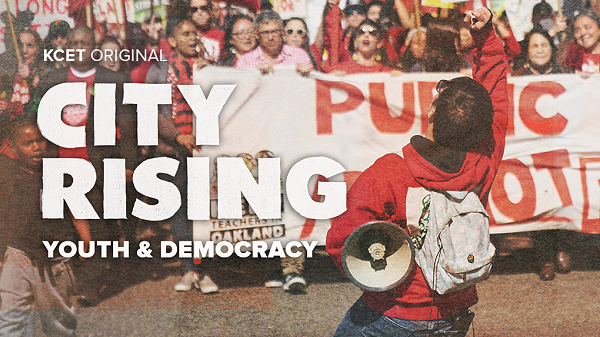 Premieres October 20 on KCET and October 25 on Link TV

In Partnership with The California Endowment

Young Californian residents are getting involved in politics like never before. The new installment of KCET Original CITY RISING examines how young people are activating their civic power to reshape systems and institutions for a better future.

CITY RISING: Youth & Democracy premieres in Southern California on Tues., Oct. 20 at 8 p.m. on KCET and Thurs., Oct. 22 at 8 p.m. on PBS SoCal. The documentary will also be broadcast nationwide Sun., Oct. 25 at 7 p.m. ET/PT onLink TV (DirecTV 375 and DISH Network 9410). The documentary will also be released digitally following the broadcasts on kcet.org/cityrising and linktv.org/cityrising.

CITY RISING: Youth & Democracy follows the stories of youth leaders, allies and organizations as they challenge institutional and systemic issues through civic engagement. Over the course of the one-hour film, the role and work of youth organizations in California is explained, demonstrating how young people are organizing their communities to participate in public policy and make lasting change in pursuit of a more just and equitable future for themselves and the world they live in. More engaged, better trained, better allied, and on the shoulders of a rich legacy, young people are fostering hope for a better future for themselves and the nation.

The five California communities featured in the documentary include:

THT: What was the inspiration for City Rising: Youth and Democracy?

Albert Maldonado: We, The California Endowment– have learned quite a bit from young people who are on the front lines leading change across California over the last decade through our Building Healthy Communities work. In fact, young change-makers accelerated The Endowment’s understanding around the connection between the impact of social-emotional health on school discipline and ultimately how that connects to the School to Prison pipelines in California. As a core strategy of our Building Healthy Communities work, we prioritized investments in Youth Organizing (https://dornsife.usc.edu/pere/BHC-youth-leadership/) which provides grantmaking support to community based organizations to build the leadership of thousands of young people across California around issues that impact them to better understand the root causes of those issues, then to form community led solutions through civic engagement strategies which often manifests in young people showing up at City Council, School Board meetings with data and sophisticated health justice campaigns. In addition to youth organizing, TCE supports youth storytelling efforts, youth healing and participatory action research. Utilizing Youth Participatory Action Research and rooted in their own lived experience, we have seen the power of young people speak truth to power as they activate their voice and leadership and how that has translated to real change around juvenile justice issues, as an example. And, we have heard from the young people how activating their agency and voice also helps to transform their own traumas and build their own resiliency as they fight for a healthier and more just communities.

So, we wanted to partner up with KCET through City Rising to lift up and share how diverse young people in California are taking a proactive leadership role in engaging and shaping democratic spaces through civic action that play out in school board, city council and legislative processes and spaces across the state. For The California Endowment, youth organizing takes youth development and youth leadership to a much deeper level of leadership in practice addressing the social determinants that shape health in our state.

THT:  How were the participants chosen?  Do they represent diverse cultures and backgrounds?

Albert Maldonado:  The young leaders in City Rising have been deeply involved over multiple years in leadership and community organizing in their local communities through local community based organizations. These leaders have often been working for years on the very issues they are impacted by– Immigration, Systems-Impacted, the Environment—and not only do they develop content and data proficiency around these issues, they also bring their real lived experience. These leaders often participate in trainings from intermediary organizations like Public Health Institute, Advancement Project and other partners that contribute to the leadership development as part of The Endowment’s broader support and investment strategy to support an eco-system of health change makers across California.

THT: What are your goals with this project?

THT: Today’s media is not the fact-delivering media it once was with giants like Walter Cronkite, Huntley & Brinkley or Edward R. Murrow.  Today’s networks unfortunately prejudice the facts by imparting their own political leanings or sometimes do not report major stories at all.  In the project, are you encouraging these young people to watch videos of these greats to give them a solid foundation for collecting and understanding factual information for themselves?

Albert Maldonado: Organizations supporting young people on health equity campaigns like Inner City Struggle in LA have a reputation and standing to uphold, so reliable and factual data is vital to the work of community based groups. Beyond relaiable data sources, young people often ground truth their experience against what traditional data sources report. For example, young people in low income neighborhoods in food deserts often report that local markets, while publicly identified as a food access point, are often liquor stores with junk food and little to no fresh produce. (https://www.phi.org/about/impacts/building-cultural-resilience-and-health-in-fresno-california/ )

THT: How active are the young folks in immersing themselves into today’s events?

Albert Maldonado: Deeply engrossed… Often it’s a big part of their social, political development and will build bonds with others in their group who are also working on issues deeply, so folks get way immersed in the work!!! And they are living it.

THT: Are they making an impact on the school funding issue?

Albert Maldonado: Yes, across the state, school push outs targeting young people are down over the last decade, more resources are going towards restorative justice and social emotional supports for student wellness. Increasingly, cities across the state are creating and funding youth development programs as alternatives to the punitive youth justice approach that has harmed far too many of California’s Black and Brown young people.

THT: In addition to KCET how is this film getting to other young people across America to motivate them to get actively involved?

Albert Maldonado: The community groups across California are not only connected together through statewide networks and coalitions, but also participate in national Coalitions like Fix School Discipline, The Women’s March and other national engagement opportunities.

THT: What has been the most rewarding development for you from this project?

THT: Are you planning a follow-up segment?

CITY RISING is a documentary series that examines social justice issues affecting California communities. The program illuminates the journey of California’s neighborhoods advocating for policy change to improve upward mobility for their communities. The effects of these movements are far-reaching, and their voices will ultimately impact the social health of communities across the country and beyond.

ABOUT THE CALIFORNIA ENDOWMENT

The California Endowment, a private, statewide health foundation, was established in 1996 to expand access to quality health care for underserved individuals and communities, and to promote fundamental affordable improvements in the health status of all Californians.  The Endowment challenges the conventional wisdom that medical settings and individual choices are solely responsible for people’s health. The Endowment believes that health happens in neighborhoods, schools and with prevention. Headquartered in downtown Los Angeles, The Endowment has regional offices in Sacramento, Oakland, Fresno and San Diego, with program staff working throughout the state. For more information, visit www.calendow.org.