Hollywood, CA (The Hollywood Times) 05/14/2018 – One of Hollywood’s most exclusive clubs impressed all as it opened its doors to a wider crowd thanks to Airbnb’s new Experiences platform which allows members to either host a party or come to one for a reduced rate.  The host of this experience, Grammy-Award winning musician Burt Blackarach (no, not Bacharach) led the night’s entertainment as DJ and emcee.  For the long-time, composer, producer, collaborator and DJ, this partnership is about re-introducing himself to a new generation.

As one of the most sought after DJs in the business, Airbnb has its public face and best selling point to attract the young party scene to their events.  Burt then brought with him many other top DJs in the biz such as Dr. Pooch.  A rapper and DJ himself, this close friend of Burt’s expressed his excitement at being a part of where this deal with Airbnb can go.  “It’s about elevating the experience.”  Pooch (a nickname from childhood) has his own venture underway that strives for a “holistic merger of health and hip-hop”.  By getting hip-hop artists like him to come aboard and speak about living healthy, the rising DJ looks to reach the youth of America just as Michele Obama tried to.

The star attraction of the night turned out to be the club itself, Le Jardin.  Airbnb chose well to pick this place as their first co-host of an ‘Experience’.  With a layout that was rearranged with new furniture just recently, according to the event organizer Lake and club manager Otto, this exclusive night spot hides behind a single door with no signage in the heart of Hollywood.  This ‘hiding in plain sight’ approach ensures that only those who are invited to Le Jardin get to walk in.  The massive space can accommodate 500 or more with sections of the club that can be separated for private parties. 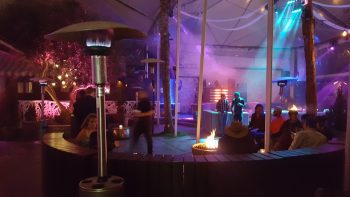 Admittedly, it is clear that Airbnb is entering into and industry and subculture that is unfamiliar to them.  The hotel trade is not the same as the nightclub business.  They have the resources and people in place to learn quickly.  But they are still in the early stages, figuring out how best to maximize the revenues from this new idea.  Once they do, the nature of the club scene might change forever.