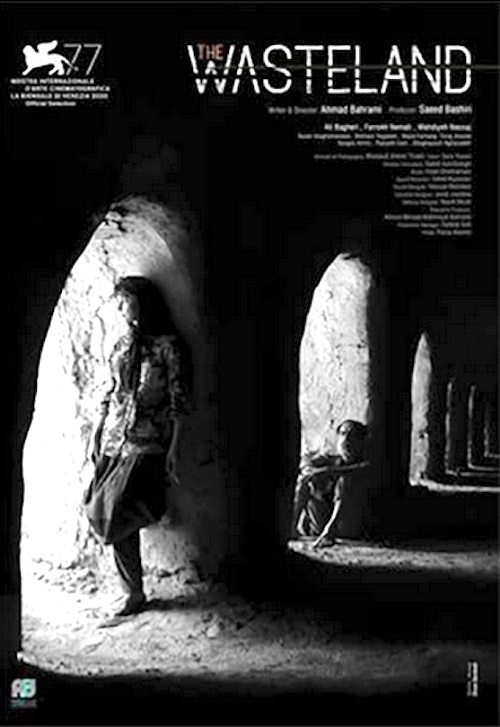 On this second weekend of the 2022 UCLA Celebration of Iranian Cinema at the UCLA Hammer Museum/Billy Wilder Theatre are a number of interesting recent films from Iran.

On Friday May 6 was a screening of Wasteland (2020), the second feature of Ahmad Bahrami that won the FIPRESCI Prize at the 2020 Venice Film Festival and considerable critical acclaim at a number of international film festivals. Wasteland is a film of stark elegance with stunning monochrome cinematography by Masud Amini Tirani. The story takes place in a remote mudbrick factory on the verge of shutdown in a dusty corner of northwest Iran, where the huge kiln tower looms over the setting like a Muslim minaret. A metaphor for modern Iran, Wasteland echoes Mohsen Makhmalbaf and Abbas Kiarostami in its chiaroscuro grace and artful framing. The storyline is spare in a haunting slow-burn that leads to a coruscating conclusion. The influence of Hungarian film auteur Belá Tarr is apparent in so many ways that one cannot help but recall the foreboding sense of doom in Tarr’s The Turin Horse (2011). Ahmad Bahrami, born in 1972 in Shahriar, Iran, previously directed Panah (2017) and is known as an actor in Subjection (2019).

In Wasteland, a small group of workers of different ethnic cultures – Iranian, Kurdish, and Azerbaijani – work tirelessly in the searing heat in this desert “wasteland” where there were once many factories for the production of mud bricks. The workers’ quarters are small spaces that feel more like a prison than a home and they have their simmering resentments regarding familial obligations and vaguely sketched social and religious beliefs. Such resentments are felt but barely seen until the shutdown of the factory is announced by the boss (Farrokh Nemati).

He sits up in his glassed-in office overlooking the factory observing the workers. He gathers them together to announce that he is no longer able to finance the mudbrick factory due to debts to the bank. He explains that the building trade is using concrete and other sustainable products and the traditional art of compressing and baking earth into rectangular blocks has no place in the 21st century.

Forty-year-old Lotfolah (Ali Bagheri) has dedicated his life to the factory as foreman and supervisor. As a boy he grew up in the factory and it is the only place he knows. With the factory imminently destined to close, he has nowhere to go with his only companion, a trusty horse. The workers look to their boss for the future but he cannot sustain them. He must settle up their wages and send them on their way to the city. Up to now their hard menial work of making and firing mudbrick in the kiln has been their central focus. But petty resentments and quarrels now start to break out between them.

Ebrahim (Touraj Alvand), an Azerbaijani Turk, is in love with an Iranian girl called Gohar. But her father Mashebad has other plans for his daughter back in their village.

Kurdish Shanu (Majid Farhang) insists on wearing a sleeveless tee-shirt much to the anger of the Muslim men. But he has more pressing problems to sort out, with a father on death row. His family needs money to pay off the accusers.

There is Sarvar (Mahdie Nassaj), a single mother who carries a secret. An intense undercurrent of emotion burns between Sarvar and Lotfolah who has set his heart on a future for the two of them. But Sarvar remains an enigma, proud and silent. Scenes of her in quiet contemplation against the backdrop of factory arches recall a distant era unconnected to the modern world yet reliant on it for survival.

The film is split in two parts, with the first one revolving around the speech the boss gives to the workers, in a rather intriguing trope by Bahrami, who repeats the beginning of the speech five times, each one focusing on one specific group, whose back-story is then presented on screen. The motif-tactic extends to these segments, all of which follow a similar pattern. Lotfollah tells them the boss wants to talk to them, followed by a conversation in the boss’s office where they present their problems, while he promises to take care of them somewhat vaguely, and then, before leaving, they mention someone else from the factory mostly for negative reasons, and most of all Lotfollah and how he favors Sarvar. Then the scene changes to Sarvar working, pushing the mud into a brickmold.

Ahmad Bahrami uses a clever narrative device that centers on the factory owner’s announcement that the factory is to close. Each time the camera takes on the point of view of one of the workers. Each major character has his or her story then amplified into its own vignettes. The worker is called to see the boss in his office. Each inquires about missing back wages and then complains about some of the other workers. The boss promises to solve each worker’s problem when he goes to the city, where he says he knows someone there who is working to solve their problem. Then the worker returns to his family and, after a brief discussion, they eat and go to sleep.

Lotfolah is alone in his life and we feel for him. Ali Bagheri gives a monumental and thoughtful performance that conveys a weight of emotion simmering under his mournful demeanor. As his co-workers slowly pack up and go back to their villages, he remains a figure of quiet desperation going about his business as diligently as in the past. And in the final act a feeling of gloom and silent despondency builds towards a truly bleak finale that says as much about modern Iran as it does echo the Gothic fright of an Edgar Allan Poe tale and the existential meaninglessness of lives.

This style of repetition actually emerges as one of the most interesting aspects of the narrative, as Bahrami uses the common ground (literally and metaphorically) of the many different characters in order to present a number of social and philosophical comments. Racism and prejudice, mostly deriving from different cultures and religions and the way they perceive alcohol consumption, extra-marital affairs and other similar topics is the most evident one, and the one that eventually leads to violence.

The theme of tradition giving way to the modern is repeatedly mentioned in conjunction with the fate of the failing factory. This, of course, provides a rather impactful critique on modernity and Iran today. The way the boss essentially micromanages everyone seems to be a comment on the whole concept of business ownership and its relation with the workers, with him emerging, and essentially being shot as a kind of “Godfather,” with Farrokh Nemati giving a great performance in the role.

The impact of all this is synopsized in Lotfollah, who emerges as the most tragic figure of all, with his downward spiral, which is actually instigated by love and his sense of loyalty, taking over the second part of the film, after the boss finishes his announcement. The tragedy that surrounds him, and the ways he always manages to be calm, but also, after a point, quite decisive, emerges as another great asset of the movie, with Bahrami showing particular affection for his character, and Ali Bagheri giving an impressive performance in the part. On the other hand, Sarvar is surrounded by a mystery that turns her into a kind of femme fatale, even without her knowledge essentially, with Mahdie Nasai having both the looks and the acting prowess to fulfill that particular role.

Bahrami’s approach in Wasteland is deceptively simple, drawing us in with its easy rhythms and repetitions as the more complex picture of emotions, workplace exploitation and community tensions are revealed. The camera moves are finely calibrated, so that people or vehicles enter the frame in ways that “meet” the lens en route, the precision and subtly shifting reiterations of the action recalling Belá Tarr, an influence also strongly felt in an opening scene of ice bouncing up and down in a horse’s cart. The story settles, snuggly, brick by brick into place at the same time as the weight of isolation builds on Lotfollah and the tragedy of a good man running out of options in life.