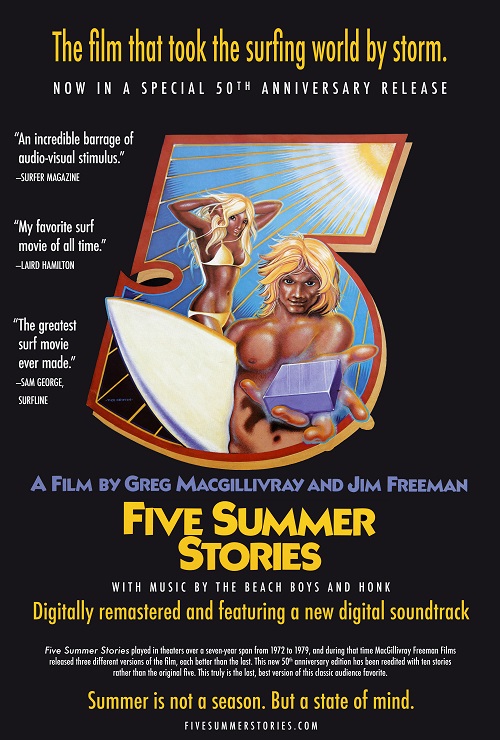 A cultural touchstone and time capsule from a truly watershed era when the world was at a critical crossroads, “Five Summer Stories” captures the state of surfing on the verge of creative transition, raising the surf film art form to a new level and setting the genre’s artistic standards for the next two decades.  Watch the trailer here.

“If you have been waiting for that MOVIE to take you back to the movie theaters, this is that MOVIE.  With amazing and beautiful cinematography of top surfers and the waves they rode, this surfer movie has everything that will entertain you. I was able to watch it on my laptop and could not take me eyes off the 15″ inch screen. But imagine watching it on the big screen at the movie theater, now that is the way to see this movie.  So get off your couch or favorite recliner chair and head to the theater where the movie is scheduled to be shown and enjoy this spectacular film.” Judy Shields, The Hollywood Times

There are five different movie theatres that will be screening this amazing film. Don’t miss the opportunity to enjoy this surfing movie this summer in August and a couple of showing in September.

Additional screenings will be held through the U.S. and Canada through September.  View the complete list of screening dates here: http://fivesummerstories.com/

Adventure Entertainment will bring this beloved epic documentary to audiences theatrically across North America (U.S. and Canada) in cinemas in more than 50 markets. This 50th Anniversary theatrical release is perfectly timed to coincide with the U.S. Open of Surfing in Huntington Beach, when surfing captures the imagination of viewers around the world. Filmmakers will be in attendance for Q&As at screening events in select markets, and community partnerships with the Surfrider Foundation, a grassroots nonprofit ocean conservation organization, as well as Quiksilver, a heritage surf brand, will support these events in select locations. Quiksilver will be releasing a limited edition t-shirt for the film’s release, available soon.

Says director Greg MacGillivray: “With Five Summer Stories, Jim and I sought to make a state-of-the-art surf film that would reflect the broader cultural shifts happening in the late 60s and early 70s, when youth culture was experimenting in so many creative ways and surfing was going through its own pivotal transition. The film really took the surfing world by storm, and I think today’s audiences will find it relevant and exciting in ways we couldn’t have imagined fifty years ago.”

“Five Summer Stories” first premiered in 1972 at the Santa Monica Civic Auditorium and was quickly deemed “the greatest surf film ever made.”  The film’s unusual format—a montage of five-plus stories or vignettes—perfectly captured a fractured era in which an explosion of creativity and revolutionary change was shaking down the old order, taking the sport of surfing off into new and unknown territory.  Although the film went through several (and increasingly popular) incarnations as it played in theaters over a seven-year span from 1972 to 1979, its fundamental story remained the same—that the pure, innocent joy of surfing was symbolic of humankind’s best possibilities on Earth without war or politics or environmental destruction.  The film features music by the Beach Boys and Honk.

Greg MacGillivray holds a very unique place in filmmaking history with a career that spans more than 60 years, first as an innovative filmmaker who revolutionized surf movies with classic surf documentaries like A Cool Wave of Color and Five Summer Stories with creative partner Jim Freeman, to working in Hollywood with such celebrated filmmakers as Stanley Kubrick on The Shining and on films like Big Wednesday, The Towering Inferno, Blade Runner, Jonathan Livingston Seagull and  Koyaanisqatsi, then becoming a pioneer and champion of the 70mm IMAX® format and creator of some of the most iconic cinematography ever captured for giant screen films, including Everest, the highest-grossing IMAX film of all time.

“Five Summer Stories” is directed and produced by Greg MacGillivray and Jim Freeman, and photographed by MacGillivray, Freeman, Bud Browne (“Going Surfin’”) and George Greenough, with narration written by Drew Kampion and music composed by the 1970s rock/surf band Honk and featuring songs by the Beach Boys.

The publication of MFF company co-founder Greg MacGillivray’s visual memoir, Five Hundred Summer Stories, will follow the theatrical release of “Five Summer Stories” and will be released on November 15th, 2022. Illustrated with more than 500 photographs and filmmaking artifacts from MacGillivray’s extensive archive, as well as story contributions by legendary surfers Gerry Lopez and Bill Hamilton, and filmmakers such as Stephen Judson, Brad Ohlund and Howard Hall.

About Adventure Entertainment:
Sydney-based, and operating in more than a dozen countries on 4 continents, Adventure Entertainment is making literal and metaphorical waves in the adventure film world with over 10 film touring platforms, and dozens of feature films in recent distribution. Specializing in producing live, eventized, theatrical film screenings, AE is leading the way in innovative, community-based marketing and generating pre, and post-show buzz in the entertainment industry. In addition to “Rookie Season,” other 2021/22 titles include National Geographic’s ” Torn,” Red Bull Media House’s “La Liste: Everything or Nothing, ” and “Buried,” from Oscar-winning producers Evan Hayes and Michael Sugar. See more at adventureentertainment.com