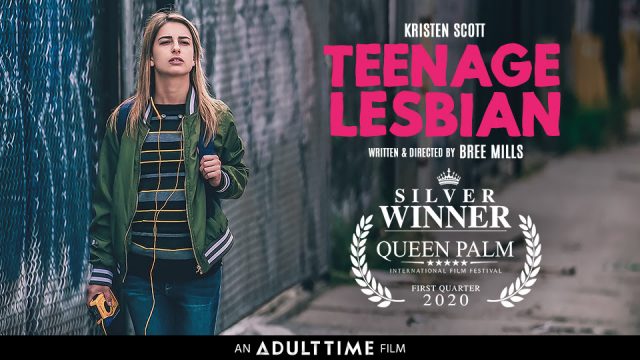 Adult Time’s Teenage Lesbian Silver WINNER at Queen Palm International Film Festival
(Montreal, QC / October 8, 2019) — Adult Time original feature Teenage Lesbian and its talented leading lady Kristen Scott have been formally recognized by the Palm Springs-based Queen Palm International Film Festival for cinematic excellence.
The critically-lauded coming-of-sexual-age tale from award-winning filmmaker Bree Mills won the First Quarter Silver Best Feature Film – Love is Love Award and Teenage Lesbian star Kristen Scott earned a Best Actress nomination and Honorable Mention for her heartbreakingly real portrayal of Sam, a high school senior coming to terms with her sexuality in the ‘90s.
“We were thrilled to have Teenage Lesbian officially selected as part of this year’s Queen Palm International Film Festival, especially to see our lead Kristen Scott receive a nomination for best actress,” said Mills, Adult Time’s Chief Creative Officer.
“Now to learn that we’ve won their first quarter silver award for Best Feature – Love is Love is an amazing feeling… we look forward to taking the film to their annual competition next fall and continuing to expose this project to new audiences!”
Scott, who was brought on board by Mills earlier this year to direct for her popular Girlsway studio, said, “I am so grateful for the recognition of this film. We put in blood, sweat and many, many tears. I want to thank Bree for trusting me with Sam, this meant so much to me.
“Thank you for giving me the opportunity to help share your story. This was an experience of a lifetime that many people will get to enjoy. I still can’t believe I was nominated and received an Honorable Mention for Best Actress. Thank you to everyone at Queen Palm for the recognition!”
Teenage Lesbian is available online to AdultTime.com members as a three-part Original Series at members.adulttime.com/channel/teenagelesbian and as an unrated full-length feature film for FREE at adulttime.com/title/teenage-lesbian. Subscribers get access to Adult Time’s entire catalog of award-winning content, with includes over 60,000 episodes and 5 new releases per day.
About Adult Time:
Launched in 2018, Adult Time is a streaming service exclusively for adults.  Created by award-winning filmmaker Bree Mills, who also serves as Chief Creative Officer, Adult Time is a platform built by fans who believe in a future where mature audiences can safely, securely, and proudly have a place in their lineup for premium adult content.
Dubbed the ‘Netflix of Porn’ by mainstream media outlets, Adult Time offers an extensive catalog of over 180 channels, 60,000 episodes and 5+ new releases per day from some of the most recognized studios, including Girlsway, Pure Taboo, Burning Angel, Fantasy Massage, 21 Sextury and Vivid Entertainment, alongside exclusive original series, feature films and much more.