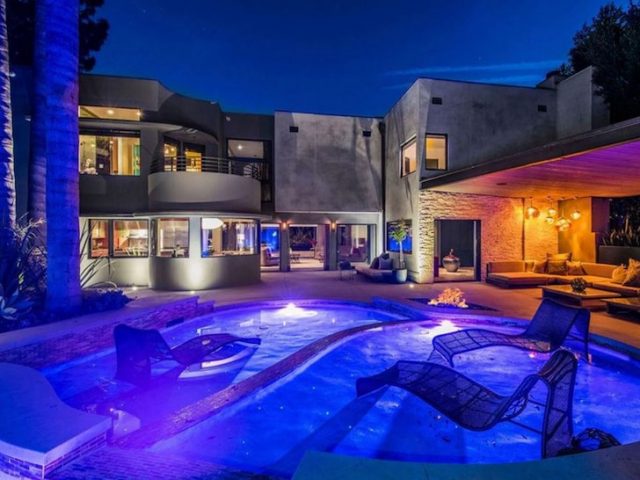 Delivering a blend of contemporary sound and theatrics, Adam Lambert’s style has propelled him from an ‘American Idol’ superstar singer-songwriter into an international celebrity.  The house he bought in 2009 that overlooks the Sunset Strip, the same year he appeared on ‘American Idol,’ reflects his personality along with his penchant for drama. Now traveling the world almost full-time performing in tours and major guest appearances, the Grammy-nominated vocalist has recently put his West Hollywood Hills home on the market for $3.35 million.

Enjoying a view of Los Angeles city lights, the 3,799-square-foot home is surrounded by lush greenery, is very private and has a disappearing glass wall that opens to a large terrace that includes an outdoor living room, fire pit and contemporary free-form pool and spa. The master suite has two balconies, a sitting room, a huge dressing room and green marble bath with steam shower and soaking tub. Night lighting brings added drama to the pool deck and a party atmosphere. Built in 1947, the three-bedroom, four-bath house has undergone impressive updates over time. In addition to formal and family rooms, there is a chef’s kitchen with Viking appliances and large island, custom wine storage and a separate studio with private entrance.

‘Friends’ superstar Matthew Perry is no stranger to real estate deals and over the last ten years, in addition to acting, writing and producing, has been buying, restyling and reselling some fabulous California homes. The most recent that has come to market is a glamorous 40th-floor apartment in the celebrity-filled, paparazzi-proof, 42-story Century condominium. Perry purchased the apartment, which covers the entire 40th floor of the building, right after selling another stunning home in L.A.’s Hollywood Hills Bird Streets in 2017.  After bringing in his team of architect Scott Joyce and interior designer LM Paganoe, Matthew has recently put it on the market at $35 million.

Perry’s home measures in at 9,318 square feet with ceiling-to-floor views over Los Angeles – visually stunning in daylight and sparkling with lights at night. It includes enormous rooms – a living room with two fireplaces, huge master suite with multiple living areas. Overall, there are four bedrooms and eight baths, game room and home theater. The chef’s kitchen has island seating as well as a table for casual dining and a separate dining room with glass walls highlighting the views. Four terraces are perfect for entertaining and dining.

Star of ‘St. Elmo’s Fire,’ ‘The Outsiders’ and the award-winning political sitcom ‘West Wing,’ Rob Lowe owns one of the most stunning estates in California’s star-studded Montecito. Aptly named Oakview, Rob has listed it for sale at $42.5 million.