Santa Monica, CA (The Hollywood Times) 09/24/2018 – Walks to End Alzheimer’s are getting larger every year due to the increase of awareness and medical research made available to the public. AA (Actors & Artists) Unite has grown nationwide since 2011 – to the current total of 44 teams – nationwide – in 2018 and have hit the historic goal of having raised over $255,000. Nancy Daly is a team captain and her motto like so many others is – we walk until we find a cure. 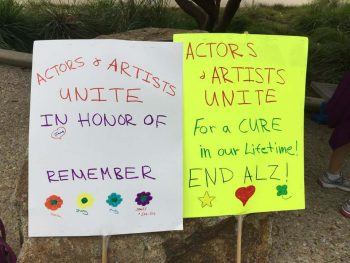 Sunday at Tongva Park in Santa Monica, California – brought celebrated actress Marcia Gay Harden and her daughter Eulala came to walk for Harden’s mother, Barbara, while suffering from the advanced stages of Alzheimer’s no longer knows the family she raised. Eulala pledged to keep up the fight for the younger generation as the duo walked with a group of 14 year-olds – raising funds along with everyone else who came with a story.

Fame brings the press but the faces here are the faces of every man, woman or child who may be walking around with the predisposition to the disease. The masses of people who walk are everyone from everywhere and it’s inspiring to be a part of the gentleness of the gatherings. People open up with the most heart-wrenching stories of loss that was or is to come. It’s a tribe of comradery – one that refuses to give up because each year brings more news of offsetting the disease, keeping it from progressing and one day of course that needed cure so that people aren’t returned to the womb while living. Alzheimer’s gives one either a long or slow descent into a role reversal that devastates the afflicted and affected by this insidious disease. 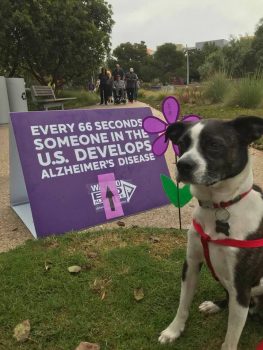 Handheld colorful flowers – called Promise Flowers – represent the diverse reasons participants have gathered. Participants will have an opportunity to write a personal message on their promise flower to further strengthen their dedication.

Once this message is written, participants come together for a heartfelt ceremony prior to the  Walk. Then together, the Promise Flowers create a dynamic, colorful and meaningful garden that they will enter as they conclude their walk. A lone white flower is held up at the beginning of the ceremony in hopes that it will be held by all – when a cure is found. Participants are then welcome to stroll through the garden, read each other’s stories and take their Promise Flower home as remembrance of their Walk experience and the promises made. Below, is the meaning of each color:

Blue — I have Alzheimer’s 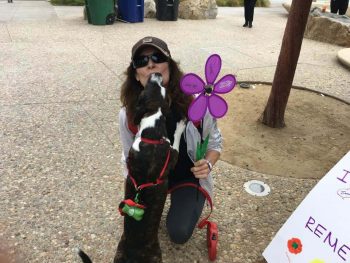 Yellow — I am supporting or caring for someone with Alzheimer’s

Purple — I have lost someone to Alzheimer’s 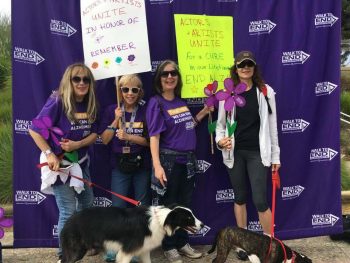 It’s a beautiful way to start a day with your community.

To join various chapters in the southland or nationwide: Alzheimer’s Association California Southland Chapter is on Facebook or sign up at their website: https://act.alz.org or https://www.alz.org/

Kenny Chesney’s song for his father diagnosed with Alzheimer’s: https://www.youtube.com/watch?v=bKH13qpFhv8