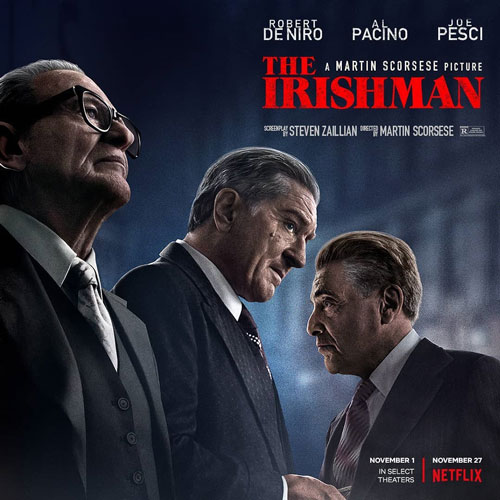 Los Angeles, CA (The Hollywood Times) 11/12//19 – Anthony Welch is in the film, The Irishman, directed by and produced by Martin Scorsese.

The film follows Frank Sheeran (De Niro), a truck driver who becomes a hitman and gets involved with mobster Russell Bufalino (Pesci) and his crime family, including his time working for the powerful Teamster Jimmy Hoffa (Pacino). Anthony Welch plays the role of a Federal Prison Guard who, along with another Prison Guard, flanks Al Pacino, who plays Jimmy Hoffa as we escort him out of prison on the day of his release.

Anthony Welch: I started in high school, just to be part of my Senior Class production. It was a small, fun part and I realized I enjoyed it, so when I got to college I joined a drama class and well…the rest is history.

Anthony Welch: I was cast as a Detective in an Independent Film, Life Among The Cannibals, a dark comedy, back in 1999. It stars, Juliet Landau and Kiernan Mulroney. I had a nice sized stakeout scene with Mulroney.

What is unique about your acting style?

Anthony Welch: I’m a Method trained actor. I studied at the Lee Strasberg Theater Institute in New York. So, I typically do a lot of research with each role if possible. I often get cast as a cop or detective. Most recently I played an avid, outdoor smoker by the name of Ken on Broad City on Comedy Central, in Season 5.

Anthony Welch: As a person and father, my son Dylan. As an Actor, the series I’m currently working on Street Smart.

Anthony Welch: Wow! Well, the biggest thing that comes to mind for me is the technology, particularly in the casting process and the “Self Tape” auditions. There are things I like about it and things I don’t. But it’s the way now, so I adapt. LOL. Of course, the other change is the opportunity available to produce your projects and get them seen NOW. The opportunities are much greater now with what seems to be a constant need for content with all of the streaming companies.

Can you share a monumental moment in your film career?

Anthony Welch: That would have to be the experience I had with The Irishman. It was a very small role but a great experience to be able to be on a set and work closely with the talent of that caliber.

Tell us about your film, The Irishman. How did you get involved with project?

Anthony Welch: Oddly, I didn’t submit for the film, but received a text message from casting asking me if I was available to work on it…uh…YEAH…LOL. It’s a very short scene and I’m a Federal Prison Guard who, along with another Prison Guard, flanks Al Pacino, who plays Jimmy Hoffa as we escort him out of prison on the day of his release. It was a short scene, however, due to the need to pace the walk with Pacino down the prison corridor and the blocking necessary in the scene, I got to work closely with Al Pacino and Martin Scorsese, which right there is the highlight of my career to date.

What do you enjoy most about producing? What have you produced to-date?

Anthony Welch: I majored in Business in college and I enjoy the ‘Business’ side of Show Business as well. I enjoy forming a team and bringing everyone together to collaborate. I enjoy the early development process and watching the project come to life more and more as you bring new creative people into the fold. Currently, I am producing my pilot episode for Street Smart along with Gotham Trinity Productions, which I hope becomes a Series. I also Co-Produced an independent TV pilot titled 20 To Life a few years back.

You wrote and produced, Street Smart. Tell us about the film. What can America change in their attitude about the opioid crisis?

Anthony Welch: Well, I knew a few people going through it. Some were addicted, some were in recovery and some were family members of those addicted. Like with many other topics right now, there seems to be a division in this country and possibly other parts of the world, on whether or not this is a disease or the person is just weak and bringing it on themselves. This particular aspect will be a focus as well with this series. The pilot episode also features an excellent cast, Joseph D’Onofrio, Joanna Pickering, John Imperioli, Frances Mignano, Sal Ardisi, Danielle Colette, Ron Guercio, David D’Angelo, as well as myself.

What key elements would you like the audience to take away from your film.

Anthony Welch: The Series will focus on the non-glamorization of this epidemic. We intend to show how it affects people from all walks of life and all socio-economic levels. We intend to show how not just your stereotypical street junkie is affected, but also the business professional in a million-dollar home is affected by it, how your neighbor, who you have no idea about, is affected by it. How some doctors, pharmacists, and Big Pharma executives play a part in it, but, we also have a commercial element to this series as well. I don’t want to give too much of it away here, but it won’t be a ‘Documentary’ on the subject, in case it may sound like that. There are Organized Crime and Drug Cartels involved in the story as well. It will have, what we hope will be a strong commercial slant to it while still tackling a very serious subject.

Anthony Welch: Wow! That could be a big list. LOL. Just about any of the major players in “The Irishman”, on a larger level. Dustin Hoffman, Meryl Streep, Tom Hanks, Morgan Freeman, Denzel Washington, just to name a very few. LOL

Anthony Welch: I look for everything that makes the character “tick”. You can get the obvious aspects of the character from the dialogue and the description. I also look for what’s NOT on the page. The subtext is key for me. I believe a great actor has to have a certain amount of empathy to be able to take on any role they decide to play. For me, it’s all in the preparation. If you can touch a person watching you work and they walk away affected by the performance you gave, I don’t think you can ask for more than that as an actor.

Anthony Welch: Next up for me is completing post- production on my Street Smart pilot and preparing it for a pitch for a production deal or Series order.

Thank you Jules Lavallee for this opportunity and interview! It’s much appreciated!!