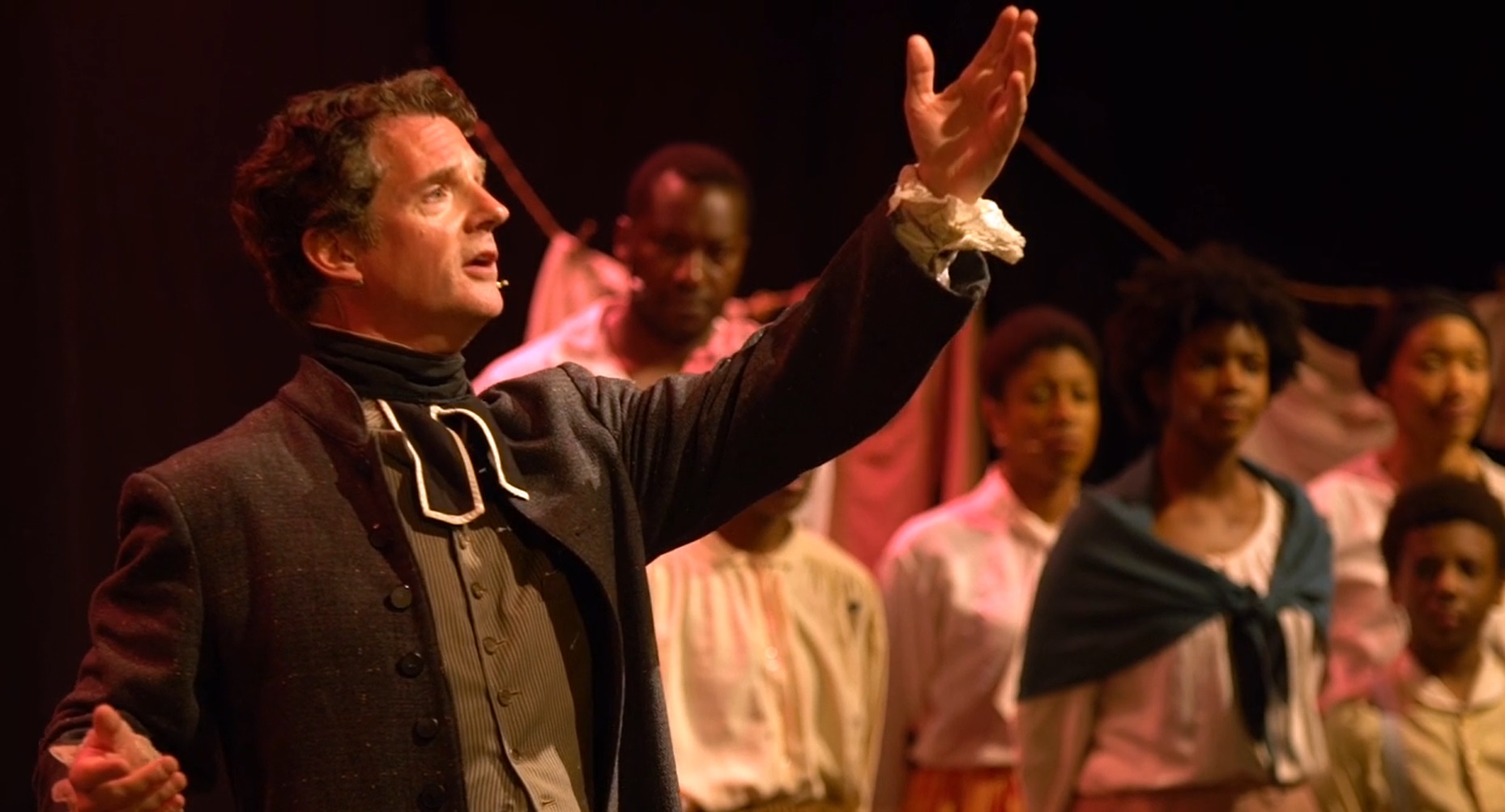 Los Angeles, California (The Hollywood Times) 09/14/2020-  Henry Box Brown is inspired by the transcendent true story of slave Henry Box Brown. Michael Simon Hall plays abolitionist minister James Smith who helps Brown escape from the south in 1849 by shipping himself through the mail in a box. Directed by Tony Award winner Ben Harney.

You have played roles ranging from an abolitionist minister anguished by his conscience, to a charming, psychopathic professor. What intrigues you about these roles?

I guess you could say I’m always eager to understand what people go through, especially if it’s something I haven’t experienced directly myself, and when the stakes are high and I think it will be a challenge for me. This abolitionist minister and psycho professor are two very different men, and two kinds of extremes if you will. One is very “good” you could say. And one is definitely very bad. Tortured, and pitiful in his own way, but in a word, evil. But interestingly, as I think about it now, they are both tortured. They are both struggling with decisions they’ve made, and how those decisions and the life they lead have affected others. It seems the main difference is the minister is much more sane, and is actively trying to take responsibility for his actions, and the professor on the other hand has given up on that. He has had so many losses, his way of dealing is to use a surface intellect to not really confront anything, and to create a split identity of sorts, so he can justify his acting out violently on others. His own personal torture is compartmentalized, and it’s deeply hidden, even from himself. 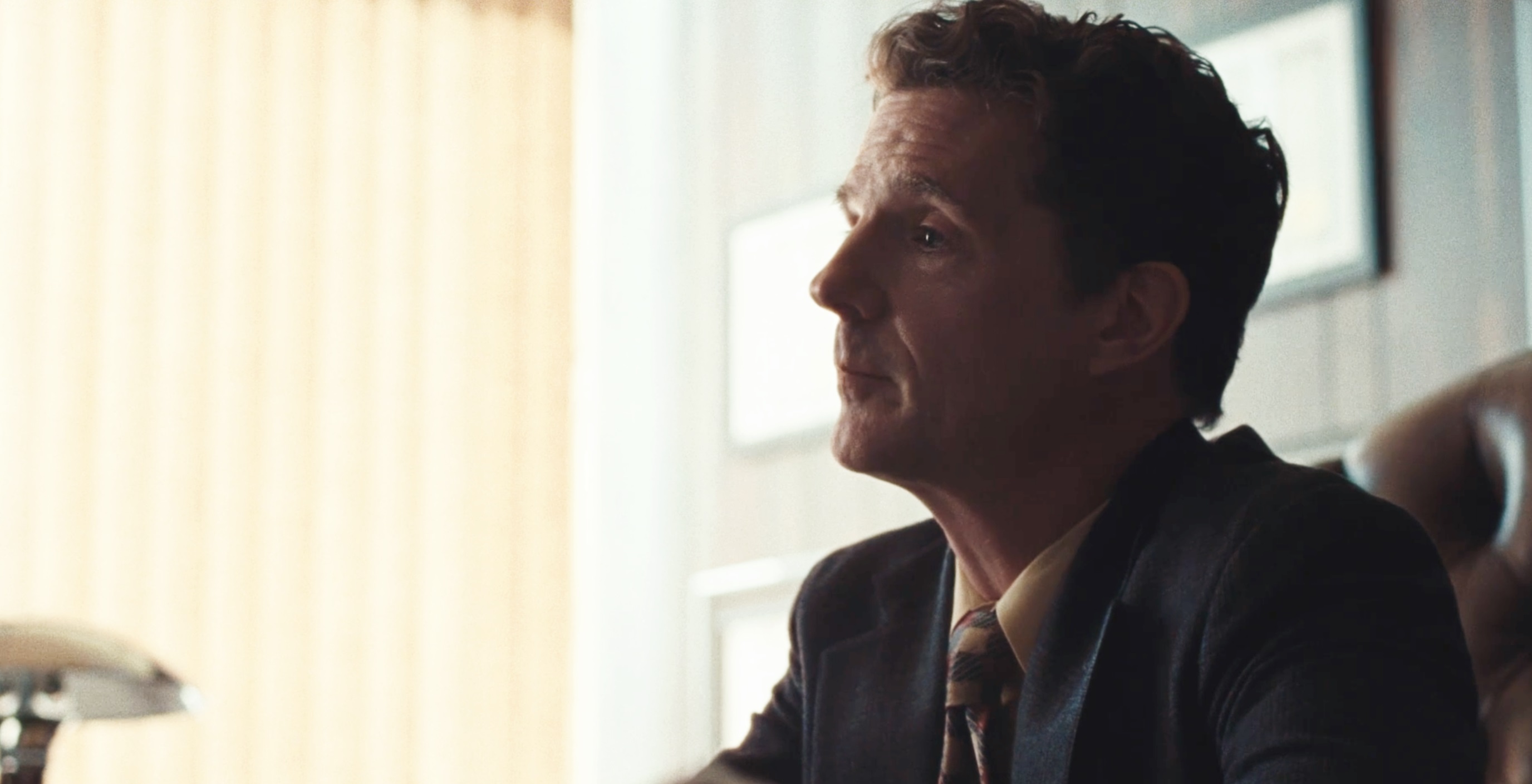 Tell us about “I KNOW THIS MUCH IS TRUE,” where you play opposite Mark Ruffalo.

It was great to work with Mark, he’s just as friendly and down to earth as you would imagine he’d be. I play Stuart Feinstein, a small town lawyer he comes to for advice on how to help his twin brother get released from a psychiatric facility, where he doesn’t really belong. I’m more interested in the potential money I could make from a class action suit, than actually helping Mark’s character Dominic do what’s right for his brother. Director Derek Cianfrance gave us space to play, we improvised on the script, tried a variety of things, which was really fun, and the final cut is a mix of our improv and the script. I like to say that this is a devastatingly real story. Sometimes almost too real. It’s a gritty family drama, but with a kind of sacredness about it. I think the score by Harold Budd really helped contribute to this. The ambient, ethereal quality of the music creates a special sense of emotion and space. It’s kind of timeless, yet somehow very specific. Derek who also adapted the screenplay for HBO from the novel by Wally Lamb, he created something deeply meaningful and touching about this average American joe struggling to do the right thing for his family and to just survive. And he’s supported by an amazing ensemble — there are many beautiful performances across the six episodes, I don’t think it’s fair to single out any one actor, just know there’s beautiful work going on, and Mark gives a tour-de-force performance, truly amazing, playing both brothers. I feel honored to have been a part of it. 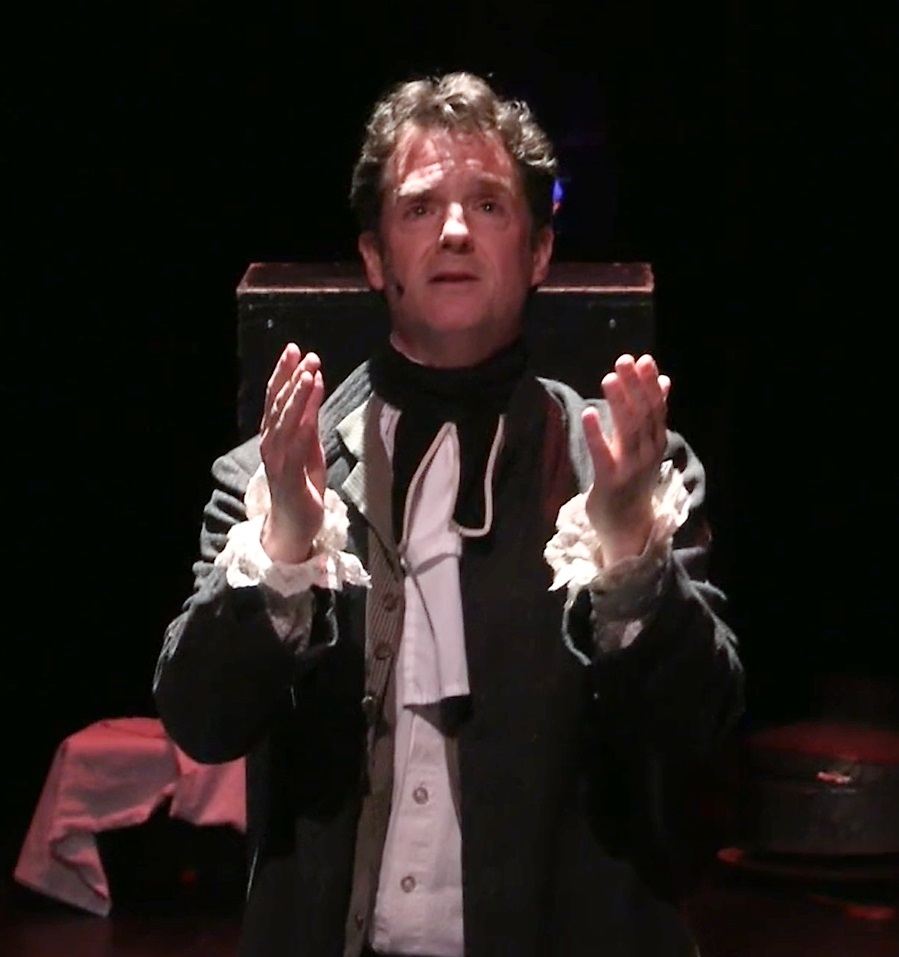 Ha! Funny, what pops in my head is a fight scene I did in Women, a crime noir thriller by Icelandic writer/director Anton Sigurdsson, where I play this psycho professor. It was toward the very end of shooting, the last day I think, and after playing such a controlled, cerebral and dark character for weeks, it was a huge release when my character comes to blows with the detective, played by Adam Dorsey, who has been tracking me down. Adam was great to work with. We did our own stunts, and in the middle of the night we were wrestling on the front lawn of my home, it was very intense but super fun. We were laughing between takes of trying to kill each other. I guess I really liked the adrenaline rush and just the visceral release that came with the physical combat. You’ll have to find out who won. It will be released Jan. 2021 here in the US and Europe.

You played Reverend James Smith in the award-winning musical “Henry Box Brown.” How is this timely? What drew you to this project?

There’s lots to unpack here, this experience probably deserves more detail than I can share in this interview, but I was interested in this project for many reasons. It knew it was a special opportunity to move and inspire people, telling the true story of a slave who never gave up fighting for his freedom. I was also drawn by the beautiful negro spirituals we sing in the show, and by my role, and also just the chance to do some theater, as I’ve been focusing mostly on screen work lately and had been missing the stage, which is where I started out years ago. Brown eventually escaped the South in 1849 by shipping himself through the mail in a box, and my character Reverend Smith helps facilitate his escape through what became known as the underground railroad. Brown didn’t let the oppression and abuse to himself and his family stop him, he had a mantra, which was passed down to him by his mother, “Free is how I’m always gonna be.” It starts as a concept in his mind, and eventually becomes his physical reality. I’ve been doing Henry Box Brown in various iterations by writer Mehr Mansuri for about three years now. Directed by Tony Award winner Ben Harney, we’ve been at the Edinburgh Festival in Scotland for two years, and we’ve been getting amazing audience responses with sold-out houses, and we were featured on the BBC. We had just started touring the US before The Pause happened, and will hopefully resume in early 2021. The audiences both here and abroad have been really moved by the storytelling, lots of standing ovations and teary eyes, and I think it’s safe to say it’s been a similar experience for the actors and the whole team. It’s quite a cathartic story. We’re enlightening audiences on the history of the terrible injustice of slavery in America through the eyes of Henry Brown, but even more so, I think it conveys a message of transcendence, that one can overcome and rise above. There is so much I could say about my personal journey with this show. For quite a time I’ve considered myself “woke”, I guess you could say, before this was a thing, but doing this show has given me an opportunity to learn about myself, and to look newly at my own ideas and feelings about race and racism, and I’ve learned more about the African American experience through the eyes of my fellow actors and creatives of color. This whole experience is helping me be a better human. 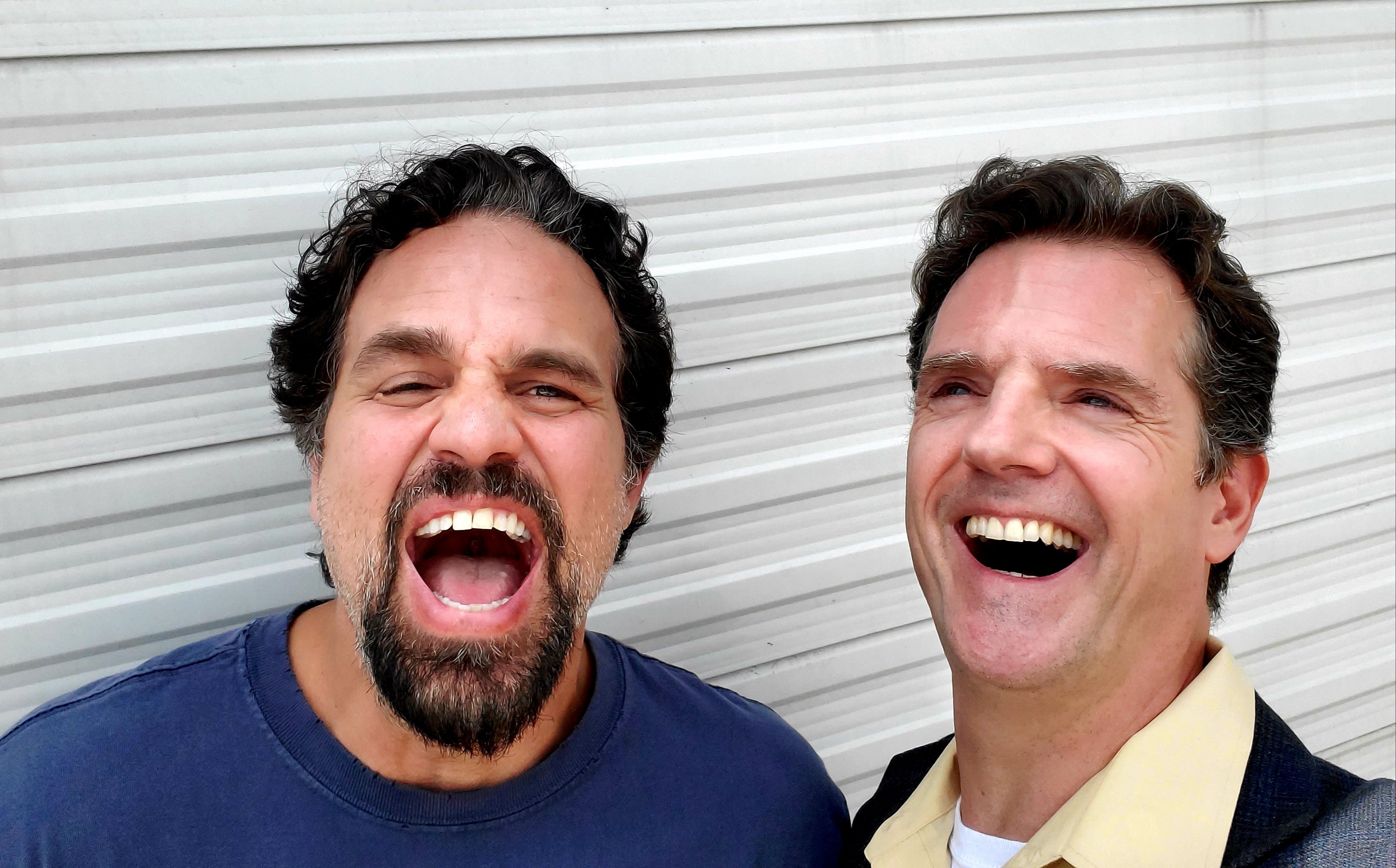 What has been the most challenging role?

Overall, I think probably playing Rev. Smith in Henry Box Brown. I’ve had other, more physically demanding roles, but this one is also very demanding emotionally. But even more so, I think it’s about the responsibility that comes with conveying the conscience of this story credibly through the eyes of this flawed man Smith. He must not only be very human and relatable, but he must maintain a sense of personal strength as he goes through a crisis of conscience and becomes an abolitionist. Playing a repentant preacher risks being hackneyed, and it has to be done with great care otherwise the conscience of the story itself will fail. You have to believe this man has become truly tortured by decisions he’s been operating on for decades, and ultimately you see him repent and fall apart completely in front of his slave holding congregation and the slaves themselves. It’s very vulnerable, full-on emotion, and it can’t be self-indulgent. It’s a fine line to navigate. If it comes across that his own pain is more important than the pain he’s caused, it won’t work. And then he needs to find new strength as he implores his parishioners to search their own hearts, to come to an understanding themselves, that, “All men are equal in the eyes of God” and that slavery is “a destruction of the image of God.” He needs to be credible to them despite his own shortcomings. The writing lays the foundation for all this, and it’s my job to make it work. There’s of course a deep resonance with our current state of affairs that makes this even more impactful and meaningful. We’ve come such a long way since 1849, but we still have a long way to go. I feel a deep responsibility to help convey this man’s journey as authentically as possible, as this is a journey many of us, each in our own way, are on right now in 2020.

You play a great lead role of a psychopathic college professor in the crime noir thriller WOMEN, by rising Icelandic Director Anton Sigurdsson. Tell us about your role.

I was really fortunate to get cast in the role of Bradley Gilmore, this charming sociology professor and a pillar of the community who is also secretly kidnapping women. Yeah, it gets pretty ugly. It’s a great role, as I had mentioned earlier, he has a split personality of sorts. One minute he’s entertaining his students or reveling in Greek mythology, and the next he’s doing deranged things to a young woman in a secret room in his mansion. He sings and plays the piano, and he’s had the whole town fooled for decades. Creepy as shit, but it was a great challenge. Hopefully audiences will be drawn to Bradley like they were to Hannibal Lechter, haha. Fingers crossed, we shall see.

In addition to Henry Box Brown, which will hopefully resume touring in 2021, I’m developing a screenplay, a children’s TV show, and a new one-man musical, all of which I can’t really say too much about right now. I’m looking forward to doing a virtual staged production of the play Death and the Maiden, by Chilean author Ariel Dorfman. It will be with the Fusion Theater Company this November, based on a successful virtual reading we did a few months ago. They are still firming up the dates. Anyone who would like to keep abreast of my work can reach me through my website michaelsimonhall.com or on IG: michaelsimonhall.