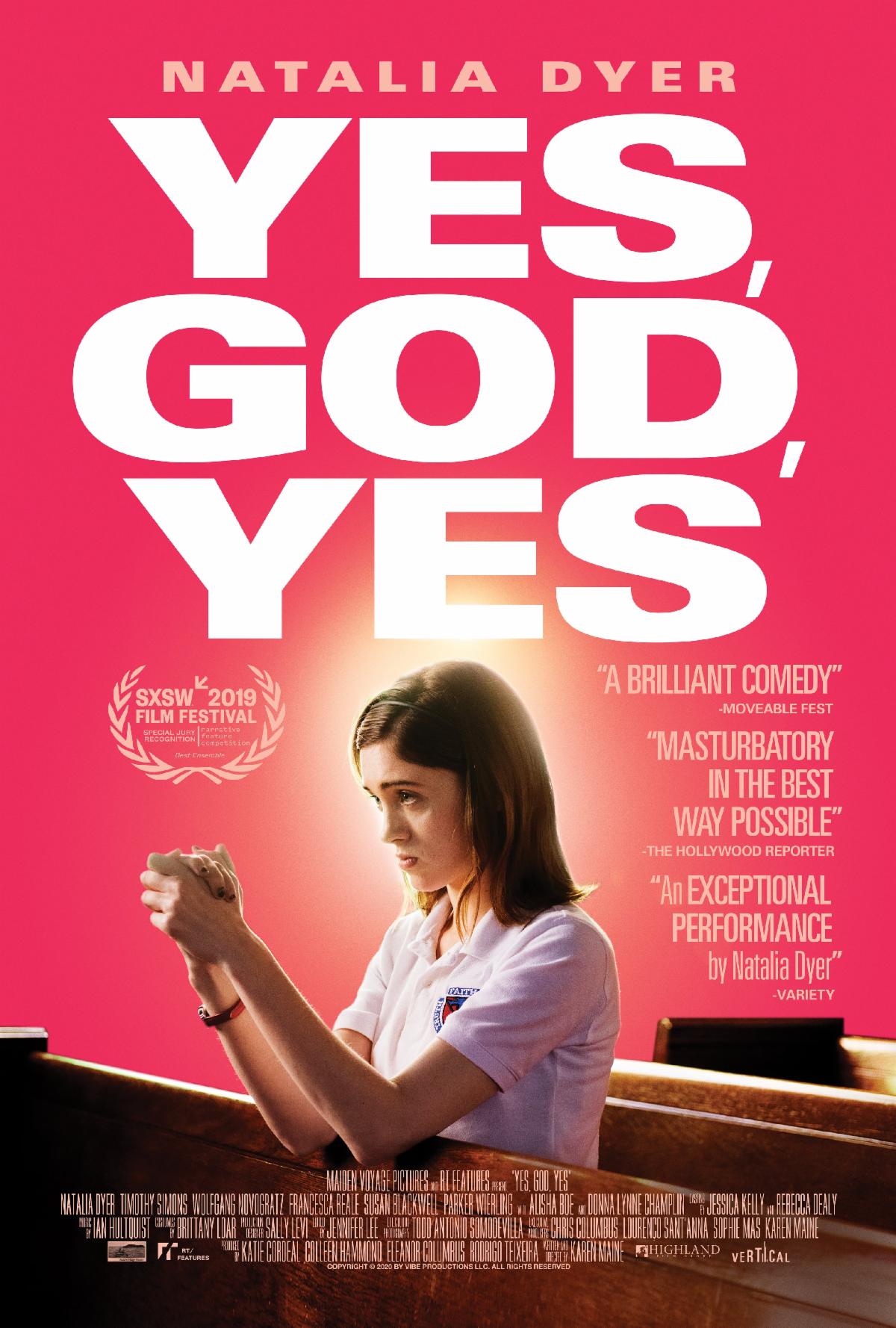 Hollywood, CA, (The Hollywood Times) 7/23/2020- As Virtual Cinemas and Drive-In movie theatres become more and more popular, the film industry is starting to utilize these new platforms to showcase their hottest summer releases to the public. Yes, God, Yes, a feature film starring Stranger Things star Natalia Dyer and Timothy Simons from Veep, is making its big debut tomorrow on these platforms. Writer/Director Karen Maine shares her unique perspective on the angst of growing up with a strong religious background in a society that does not necessary hold the same values. This semi-autobiographical film follows 16- year old Alice as she secretly explores her sexuality while trying to retain her moral compass.

“Eighty percent of what happens in this film comes from my life story,” said Maine. “I really wanted to share my story because I think a lot of people have experienced this dilemma and people who haven’t are going to be shocked. Sometimes people who haven’t grown up in this environment think that I am overreacting and embellishing but this stuff really does happen.”

Creating a film with a strong religious presence can be hard to communicate the vast difference between what people say verses what they do. In this film, Maine has really captured the struggle that exists and has shown it through the eyes of a teenager.

“I grew up in an environment where everyone was Catholic and I wasn’t capable of thinking critically about different beliefs,” explained Maine. “I always wanted to explore the area where religion and sexuality intersect because I think its fascinating. A lot of young Catholic people feel guilty about their sexuality due to the strict set of rules that are unwavering. Everyone is bond to cross these rules at some point in their life which will leave them feeling guilty. I’m just trying to show the world of religion.”

Maines’ feature directorial debut, Yes, God, Yes, has been a passion project for many years. She started writing this film in 2014 while in college. Not knowing that her religious retreat storyline would have such an impact on fellow classmates, she decided to look further into expanding her idea.

“I wanted to add a female component to the story, so I sort of popped in my coming of age sexuality where women often explore their bodies on their own first. I wrote the feature but I wasn’t planning on directing it. However, a director friend of mine suggested that I direct it because it was my story to tell. I’m so glad she said that because when I went to my creative team and told them, they were excited about the idea,” said Maine.

One of the most enjoyable parts of filming is the outtake reel. Everybody loves bloopers, especially when creating comedy.

“There was one line in the film where actor Francesca Reale, who played Laura, had to tell Natalia what she believed an enema was. Francesca couldn’t get her line out without laughing so she decided to not look Natalia in the eyes when she said it. I told her that she had to look at Natalia so she finally figured it out after a couple of tries. It was really funny,” remarked Maine.

This film had a great cast and crew that supported its endeavors and believed in its relatability.

“This was a cast project where everyone felt that this was a film that needed to be made,” exclaimed Maine. “It was a real collaborative effort. Everyone played a role in the making of this film. I wrote and directed it, but I couldn’t have done it without the help of everyone involved. It was really a team effort.”