Los Angeles, California (The Hollywood Times) 5/23/2021 –  Jody was born and raised in Queens, NYC. Mandarin Chinese was his first language until the age of 5 at which point his mother, in combination with Sesame Street and Mr. Rogers began to teach him English. He began acting in the middle of 2019 when a friend told him about a background gig. They were looking for Asians for the show Awkwafina. He signed up and was a background for Mr. Robot. As productions started to open up, Jody began taking online acting classes with (James Ciccone, Joseph Pearlman, Wendy Alane Wright and UCB for Improv). He just landed his First Co-Star Role on CBS’ FBI. He is represented by the Glitter Talent Agency with his agent Hilda Morfi.

Math and science were always my strengths. How does one go from engineering to the great world of acting?

My journey from engineering to acting is interesting. I deviated from engineering when I nearly flunked out of college. It was difficult to land an engineering role with horrendous grades, no experience and poor communication skills. I ended up leaving my field and jumped from industry to industry and job to job trying to find something I could settle into but it never happened.  Although I couldn’t find the right role, every experience provided a new perspective. There were three that really stood out as big influencers on my decision to pursue acting: customer service, field service technician and pizza restaurant owner. Public speaking has always been and still is (to a much lesser degree today) my biggest fear and weakness (this includes one-on-one conversations with strangers as well). As a customer service representative, I was forced to speak with unhappy strangers day in and day out. At first, it was extremely stressful and I hated it, but after a few months, it became easier and enjoyable.

Dealing with change was difficult well into my 20’s but living out of a suitcase, not knowing where or when my next project would be really reshaped my perspective on permanence. As a field service technician, I had no choice but to go with the flow and not get too comfortable in any one location. Over time, I enjoyed living in hotels so much I didn’t want to return to an apartment. Being an entrepreneur was the ultimate test of whether I had truly conquered my fear of public speaking in order to promote the business, being able to handle the constant changes needed to make the business profitable and whether or not I had the work ethic to work all day every day to see the restaurant succeed. The answer was yes, yes and yes. Although it was the most stressful thing I have ever done to date, I realized that I love being my own boss. In the end, the restaurant didn’t pan out and five years had passed. It was 2019 and I happened to be in between jobs when a friend told me about an opportunity to be on the TV show Mr. Robot as a background actor. I said why not, and did it for fun with no other intentions. I ended up enjoying my time on set so much that I contemplated diving into acting. I started researching show business and the more I learned, the more I understood what it took to succeed. I noticed many parallels to the things I had already done and that gave me confidence to jump into it fully.

Do you have favorite genres?

I love martial arts or any type of action films. I also really enjoy comedy. Another genre I like, though it’s not really a genre, are films that make me think and go WHOAAA!

Your first co-star role was on CBS’ FBI, season 3 episode 13. Tell us about your role.

I’ll never forget the call I got from my agent on that Friday afternoon around 2 PM.. She told me that I had an audition for the show FBI as a reporter and that I needed to get the self-tape over to her by 5 PM. I’m glad I was home at the time so I knocked it out and sent it right away. A week had gone by and I heard nothing so I thought that was a foregone opportunity. Then on a Tuesday, I receive an email with the subject line “BOOKED FBI” and I remember welling up from emotion!

As a reporter, I had 2 lines in a scene that was high energy and intense. I ask Mr. Davis (the character is a portrayal of the Robinhood app CEO) why he did what he did and that was it. SO MUCH FUN! It was a surreal experience because I had done a lot of background work just before the pandemic and always thought “how cool would it be if one day I was one of the actors with lines?” and then it came true!

What roles interest you?

I see myself playing a number of different roles of the following types: doctor, lawyer, detective, police officer, military, business/finance guy or office worker. I’d like to start there and develop more over time.

At the moment, I am more inspired by everyday people who live the lives they live. I have an incredible amount of empathy and really enjoy hearing people’s life journey. I’m also inspired by people who have devoted their lives to coaching others into the best versions of themselves.

You signed on with the Glitter Talent Agency. What are your goals/upcoming projects?

My near term goal is to book more network television credits as well as supporting/day player roles in films. I understand there’s a process to building my brand and that it takes time. 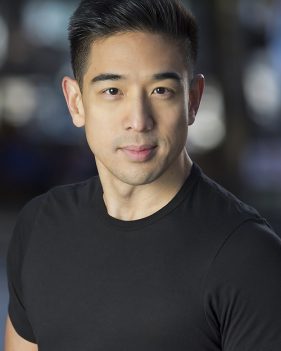