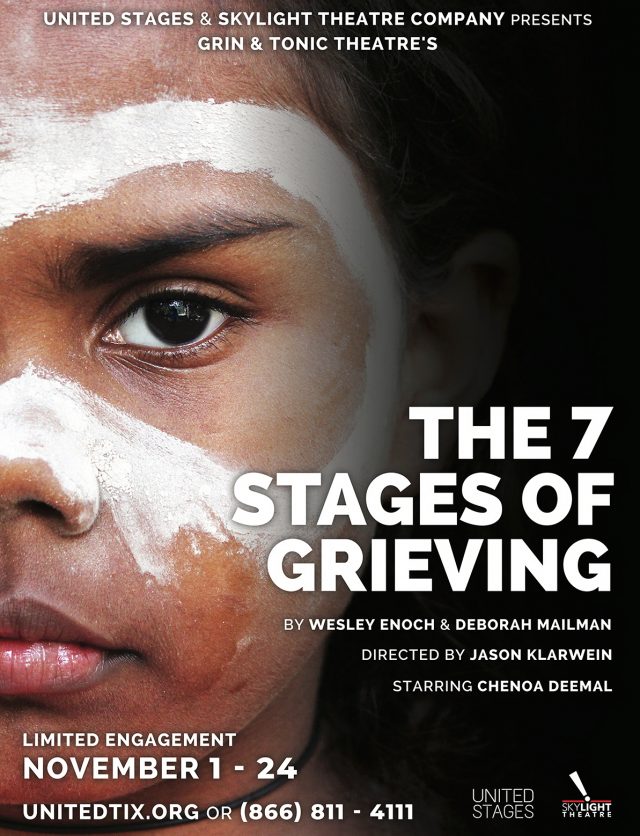 In a solo show at the Skylight Theatre in Hollywood, the first professional Aboriginal production in Los Angeles illuminates an indigenous people’s struggle for equality and recognition under the brutal hand of ongoing post-colonial oppression in Australia.

Yes, there is hope for reconciliation, and “The 7 Stages of Grieving” at the Skylight Theatre in Hollywood is not a cumbersome slog through the tragic fate and cultural genocide of the indigenous people of Australia. As an Australian Aboriginal actor playing an Aboriginal ‘Everywoman,’ Chenoa Deemal is not going to allow that to happen. She balances the tragedy of the ongoing post-colonial oppression of the indigenous people in her native land with humor and casual expression. She takes us to too many intriguing places and tells too many fascinating stories for this one-woman show to be one-note. Indeed, in the harsh light of a scarring subject, the versatility of the multi-dimensional presentation is impressive to behold.

What’s even more captivating is the simple truth that actor Chenoa Deemal and director Jason Klarwein are not the originators of this narrative. In 1995, Wesley Enoch, the Aboriginal Artistic Director of the Kooemba Jdarra Indigenous Theatre, directed Aboriginal actor Deborah Mailman in “The 7 Stages of Grieving,” a groundbreaking one-woman show first performed in Brisbane. Co-written by Enoch and Mailman, “The 7 Stages of Grieving” is a real milestone in Australian theatre history.

Discussing the development of the play and its place in the greater cultural narrative, Wesley Enoch writes persuasive essay. In Contemporary Indigenous Art Practice, he writes, “The role of contemporary Indigenous meaning-making through arts and cultural endeavor is a continuation of ancient structures of storytelling with an ongoing review of language, form and geographic context as well as content… Kooemba Jdarra (which means “Good Ground” or “Sweet Land” in the Turrabul group of languages from South-East Queensland)… came from a groundswell of support from Indigenous artists and communities for a company to explore that perspective in an all Murri Mura environment.”

Thus, “The 7 Stages of Grieving” was one of the first attempts by Kooemba Jdarra to make such an exploration. Although the Aboriginal woman in the play represents the ‘everywoman” by telling a multiplicity of stories, the stories told still come from the experiences and research of Wesley Enoch and Deborah Mailman. At the same time, actor Chenoa Deemal deeply values authenticity. Given this perspective, is it hard for her to take on a role written years ago by other Indigenous people?

Upon being asked this question after the premiere of the new production at the Skylight Theatre, Chenoa Deemal smiles knowingly and replies with wisdom, “For me, there are so many parallels to my own life. There is a universality in the experiences of Indigenous people. When a text is profound and expresses truth, both you and the audience can relate to the inherent meaning. The power of these stories reflects moments that I experienced growing up and that I continue to experience to this day. When the creative process is both true and universal, you can fully embrace it as a performer.”

Without question, Chenoa Deemal does an incredible job taking on the role. Rather than wearing the part like a costume, she fully becomes the character, and her believability is never in question. No matter an individual’s background or personal experience, each member of the audience identifies with the Aboriginal ‘everywoman’ because she is so utterly relatable as a human being. Like all of us, she loves her family. She mainly wants to protect her community and the heritage of that community. The modulation of Chenoa Deemal’s tone and voice allows for the intensely painful moments to be truly intense. Since they only come when required, such brutal revelations and vicious devastations in the narrative contain the power they need to be genuinely affecting on a visceral level.

Creating in tandem, Chenoa Deemal is not alone on the stage even when she is a solo performer. The support and guidance of her director, Jason Klarwein, is present in her poignant performance. The Australian Grin & Tonic Theatre Troupe developed this production of “The 7 Stages of Grieving” with Queensland Theatre in 2015 and toured Australia in 2016 and 2017. Jason Klarwein is the Artistic Director of the Grin & Tonic Theatre Troupe, and he travels with the show. Before coming to the Skylight Theatre in Los Angeles, the production has appeared at the International Performing Arts for Youth conference in Montreal in 2016 and Origins: Festival of First Nations in London in 2017.

As a white Australian of European ancestry, further questions are raised by Jason Klarwein’s participation. After all, he has a long history in European-oriented Australian theatre as both a director and an actor. Therefore, is it problematic to direct a play born of the traditions and stories of the Indigenous people? Although the original creators signed off on his participation, is it controversial?

When asked this question after the Los Angeles premiere, Jason Klarwein provides a deeply intuitive answer that breaks the foundation of such a question. With the light of compassion in his eyes, he says, “I believe reconciliation as a process of healing is a two-way structure. The play does not set itself apart from the white Australian experience or the black Australian experience. It is the convergence of people trying to right the wrongs. We must work together to make a better and bright future. But first, we must acknowledge the terrible pain our forefathers inflicted on a proud people. It is this coming together that drives the work we do. A unity. We can only walk forward together.”

In other words, it takes two to tango, and Jason Klarwein and Chenoa Deemal have come together to give new life to a revolutionary play with a powerfully inclusive message. Yes, after years of colonial and post-colonial oppression, there is undeniable anger fueled by loss and the grief brought on by such loss. At the same time, such anger is not meant to spur on violence or bring forth greater alienation.

Instead, the dream is for the energy of justice and decency to bring us together and open our eyes. In the end, we all want to protect those we love by giving ourselves and our children the freedom to live authentically. Ultimately, nobody is more aware of this truth than the Indigenous people of the world, including the Australian Aboriginals, the Native Americans, and the First Nations. In “The 7 Stages of Grieving,” those people have a voice that resonates long after the performance ends.

For more information about “The 7 Stages of Grieving” and to purchase tickets online, visit  https://skylighttheatre.org/.