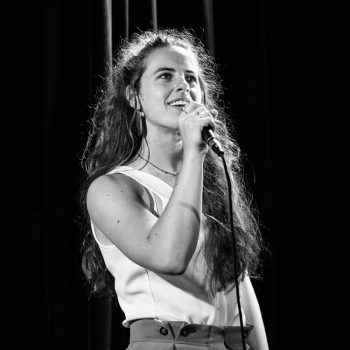 Ellie Gravitte, a finalist in the inaugural ABC Entertainment Marketing Women’s Production Program, inspired the season two campaign for the hit drama “A Million Little Things.” The tagline “I’M IN” originates from the emotional storyline between Gary (James Roday) and Maggie (Allison Miller), who met at a breast cancer support group, fell deeply in love and endure the push and pull of life in remission.

Earlier this year, ABC Entertainment Marketing worked alongside creative studio Ideas United and its Campus Movie Fest alumni network to select 10 finalists to take part in the inaugural Women’s Production Program to encourage female creators to pursue careers in television marketing. The group of women, comprised of current college students and recent college graduates from across the country, traveled to Los Angeles for a multi-day event that highlighted elements that go into creating a marketing campaign for television series. Event activities included a tour of the Prospect Studio Lot in Hollywood to see firsthand how a promo goes from idea to air and attending a panel discussion with various department heads across ABC Entertainment Marketing. The finalists also had the opportunity to present their concepts for an upcoming promo of “A Million Little Things,” “Dancing with the Stars” or “Single Parents,” and ABC creative leads selected Gravitte’s concept to be greenlit and fully developed into a promo. The concept was so impactful that her idea inspired the season two campaign that will run on-air and on digital platforms.

“A Million Little Things” creator and showrunner DJ Nash was so moved by Gravitte’s concept that he asked to be on set during the shoot and is featured in an upcoming spot. In the promo, Nash is seen having honest conversations with fans, also known as Millionaires, about how the show’s authentic storytelling has affected their lives; and he responds with, “When I did this show, I hoped that it would affect people. I just didn’t expect this.”

“ABC Entertainment’s Women’s Production Program provides aspiring female creators with the opportunity to learn about the importance of creative marketing storytelling and how to turn their passion for short-form filmmaking into a career reality,” says Robert Schefferine, ABC Entertainment Marketing’s vice president of Production. “We were blown away by Ellie’s simple, yet brilliant, concept and quickly realized that her idea could be developed in a full campaign.”

“This gave me such an incredible insight into workflow, television, seeing all different sides of production, marketing and timeline. I can’t even express how much I learned from the beginning to end in this process,” said Ellie Gravitte, director, writer and editor and recent graduate of Brown University. “I feel equipped for whatever is next, whether if it’s in entertainment marketing or in television production because I just feel like I speak the language a little bit more now.”

Raven Bradley, Ideas United director of Production, noted, “It’s so important to us to present opportunities to female storytellers so they can bring their vital perspective to the commercial production landscape. This is a once-in-a-lifetime experience for an emerging filmmaker to work with some of the best creative minds in the business.”