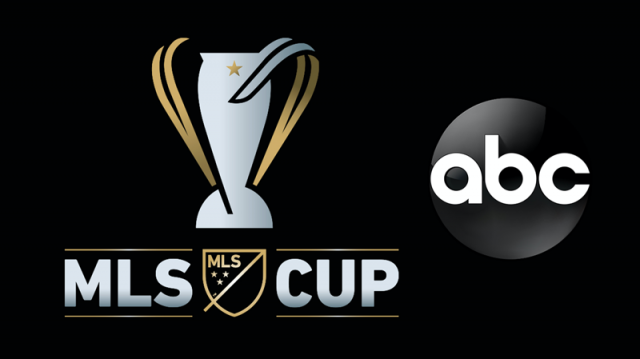 ABC will broadcast the “2019 MLS Cup Presented by Audi” on SUNDAY, NOV. 10 (3:00-5:30 p.m. EST), when Seattle Sounders FC host Toronto FC at CenturyLink Field in Seattle. The match will also be streamed live on both the ESPN and ABC apps.

This will be the 22nd MLS championship on ABC or ESPN network and the return of Major League Soccer’s championship to the broadcast network for the first time since 2008.

Jon Champion, who is completing his first season as the play-by-play voice for MLS on ESPN, analyst Taylor Twellman and reporter Sebastian Salazar will call the match on ABC. Adrian Healey, Kasey Keller and Alejandro Moreno will host studio segments during the broadcast, including a halftime interview with MLS Commissioner Don Garber.

The Sounders and Toronto FC are meeting for the MLS Cup for the third time in four years. Seattle won in a penalty shootout in 2016, while Toronto earned a 2-0 victory in 2017. Seattle’s stars include Nicolás Lodeiro (Paraguay), Raul Ruidiaz (Peru), Jordan Morris (USA) and Brad Smith (Australia), while Toronto counters with a trio of U.S. National Team players – Jozy Altidore, Michael Bradley and Omar Gonzalez – and Canadian Jonathan Osorio. Sunday’s match is officially a sellout with more than 69,000 fans expected to pack CenturyLink Field, which will rank as the second-best attendance mark ever for MLS Cup.