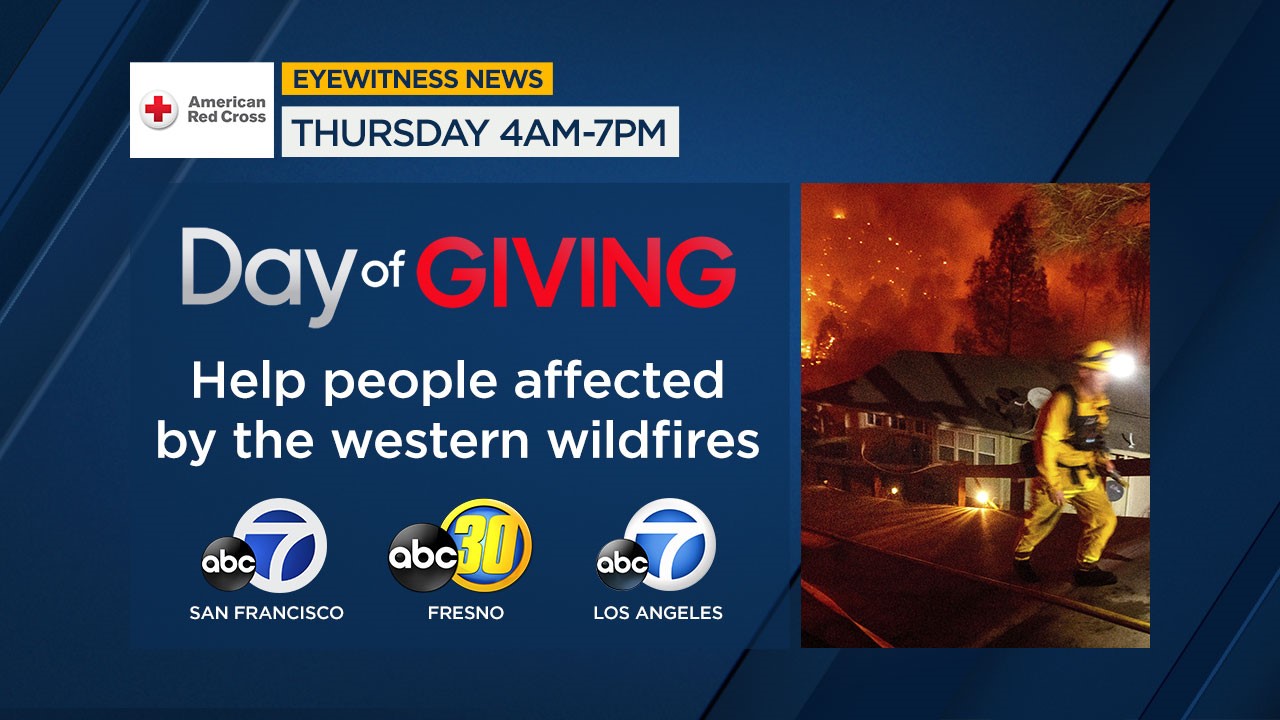 ABC Owned Television Stations in California launch “Day of Giving” to raise funds for the American Red Cross that will take place across ABC7/KABC-TV Los Angeles, ABC7/KGO-TV San Francisco, ABC30/KFSN-TV Fresno and 13 ABC affiliate stations throughout California, Oregon and Washington on Thursday, Sept. 17 (4:00 a.m.-7:00 p.m. PDT). Viewers can call 866-499-GIVE (4483) during local newscasts to donate money through the Red Cross to aid communities impacted by the more than 100 wildfires raging across the state. The fires have burned more than 5 million acres in the past few weeks and destroyed countless homes and communities, forcing hundreds of thousands of people to evacuate.

The Red Cross has mobilized a massive relief effort across these states to ensure that communities have food and shelter.  During fire season, ABC7 Los Angeles, ABC7 San Francisco and ABC30 Fresno have been keeping viewers informed of the statewide wildfires and air quality through an interactive wildfire tracker on the stations’ websites. The “Day of Giving” fundraiser further unites the ABC owned stations and west coast ABC affiliate stations, which will use their linear programming to focus on news coverage about the numerous communities impacted by the wildfires, provide resources through the American Red Cross, and raise money to help families in need.

On Thursday, Sept. 17 (4:00 a.m.-7:00 p.m.), all participating stations will open phone lines where viewers can call 866-499-GIVE (4483) and donate. Viewers are also encouraged to donate at redcross.org/abc, which will remain available until further notice.

Participating stations include the following:

ABC7 Los Angeles is Southern California’s No. 1 local news and information source. ABC7 is a leader in digital and social audience engagements and was the first station in the Los Angeles market to regularly broadcast news in high definition and also the first local television station in the United States to surpass 3 million Facebook followers. The station’s offices and studio are located in Glendale, California.

Emmy® Award-winning station KGO-TV ABC7 is the San Francisco Bay Area’s source for breaking news, weather and live video. Widely recognized for its solution-based promise to help the Bay Area communities, the station’s initiative “Building a Better Bay Area” dedicates more time, resources and reporting to the issues that impact its viewers’ quality of life. From the local economy and education, to health and safety, to issues impacting the environment, ABC7’s focus is to bring greater perspective on the challenges currently facing neighborhoods. In addition to being the first station in the market to expand its weekday morning program to 4:30 a.m. in 2008 and their 11 p.m. weekend newscast to one hour in 2011, the station has consistently garnered Emmy nominations and wins for Overall Excellence/News Excellence, with one most recently awarded in 2019. KGO-TV is an ABC owned television station serving San Francisco, Oakland, San Jose and all of the greater Bay Area, which together comprise the nation’s sixth largest television market.

KFSN-TV ABC30 is the No. 1 source for local news in central California, both online and on the air. The station has dominated the local news ratings in the San Joaquin Valley for decades as a leader in multiplatform audience engagement. KFSN-TV is an ABC owned television station based in Fresno, serving Fresno, Madera, Merced, Mariposa, Tulare and Kings counties.