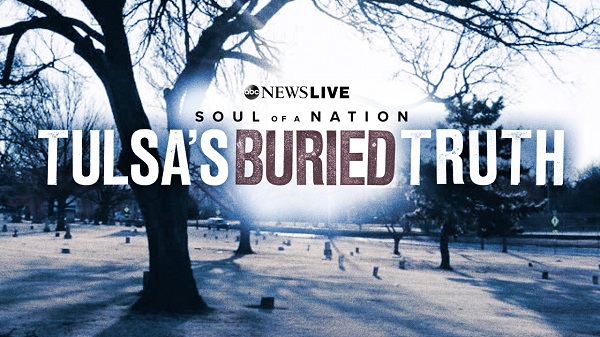 ABC News Live will present “Tulsa’s Buried Truth,” a documentary special on the Tulsa Race Massacre, nearly 100 years after a violent white mob descended on a prosperous Black community, known as Black Wall Street, and, in less than 24 hours, destroyed and terrorized the neighborhood, killing as many as 300 Black Americans. Stemming from reporting that aired on the groundbreaking, primetime newsmagazine “Soul of a Nation” and the successful ABC Audio podcast “Soul of a Nation: Tulsa’s Buried Truth,” the half-hour documentary special will take a look at one of the most brutal and rarely discussed racially motivated attacks in American history. Led by ABC News Senior National Correspondent Steve Osunsami, “Tulsa’s Buried Truth” will examine more around the issue of reparations, including previous efforts that failed in Tulsa and feature additional interviews with Tulsa natives, Tulsa’s current mayor, G.T. Bynum, and descendants of the victims, including Joi McCondichie, and those who are now a part of the group working to find mass graves, including Kristi Williams. “Tulsa’s Buried Truth” premieres on Tuesday, May 18 (8:30 – 9:00 p.m. ET), on ABC News Live and will be available on demand on Hulu.

ABC News Live is ABC News’ 24/7 streaming news channel that presents coverage of live events, breaking news, in-depth reporting, context and analysis from around the world. It features original programs such as evening newscast “ABC News Live Prime” with Linsey Davis, “ABC News Live Update” with Diane Macedo and “The Breakdown” with Macedo and Terry Moran. It has streamed a robust slate of original news and entertainment specials and original documentaries, including “Guardians of the Amazon” and “Homegrown Hate.”